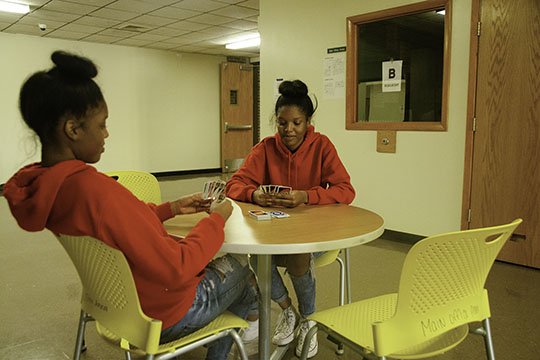 I’ve never feared being alone. I’ve always had people to be around, talk to and hang out with. I remember being a nice little sweet girl who got along with everyone.
At a young age, relationships aren’t as serious as they are when people are older, especially as they reach adolescence. In elementary school, my teachers taught the class to be nice to everyone with the Golden Rule: “Treat others how you want to be treated.”

When I got to middle school, everything shifted. Having friends mattered, being one of the “cool kids” mattered. If I hung out by myself, I instantly felt like an outcast and hated knowing I was being left out of conversations, inside jokes or any news going on among my friends.

I had about five friends in middle school and I lost a couple because of jealousy. We had petty, childish drama, of course. Titles of relationships such as best friend, right hand, or ride or die, were major, causing most of the conflict between my friends and me.

One friend would get mad if I called another person my best friend instead of them or if I was talking to people my friends doesn’t like I was called fake. As I look back on my friendships and the way I acted when I was younger, I realize I was just trying to figure out who was and was not not my friend.

At first it was rough to lose people I was close with, but I knew it was all for the right reasons.

As I transitioned into high school, I was friends with everyone. I wasn’t afraid to meet new people, which allowed me to start off as friends with one person who knew other people and so on. This led to a new, big circle of friends that I had made, and over time we grew close. This helped me because I hated doing things on my own, including being in a big school with hundreds of kids I barely knew.

I only hung out with my friends and did the activities that they were doing. Therefore I didn’t go to many football or basketball games. I didn’t attend school events unless I knew people who were going. If I knew people at an event, it made it easier for me to loosen up. I’ve lost relationships with my closest friends, even my best friend, mainly because we grew apart and because I lost trust in them. We found other friends who we connected with more and who we ultimately built better relationships with. At first it was rough to lose people I was close with, but I knew it was all for the right reasons.

In previous relationships, when I have had to question someone’s trust or loyalty, I instantly distanced myself. It isn’t healthy for me to continue to try and build relationships with people with negative energy because that then causes me to adopt the negative energy as well. One of the biggest reasons my ex-friends and I grew apart is the drama they got into. I hate drama; I’m a chill person who doesn’t like to get involved in petty fights. When they started getting messy and beefing with other people, that signaled the end of those friendships.

Although I have friends that I talk to in school and a couple outside of school, I don’t have too many people I can go out and do things with or have deep conversations with. After I basically cut off all my friends, I became all I had which isn’t the worst thing.

So I learned to be independent. If that means I attend a movie alone or shop by myself, so be it. The more I depend on other people the less fun I’ll have. I now push myself to take that class that none of my friends are taking or go to that concert even if I have no one to go with. I can meet new people along the way. I’ve learned to go out and live my best life and not wait on people. They can get with what I’m doing, or get lost.

I really connect with this article bc I felt this way a lot during middle and high school. I like this a lot.

That’s a pretty cool view on something most people think negatively of! Very neat read 🙂