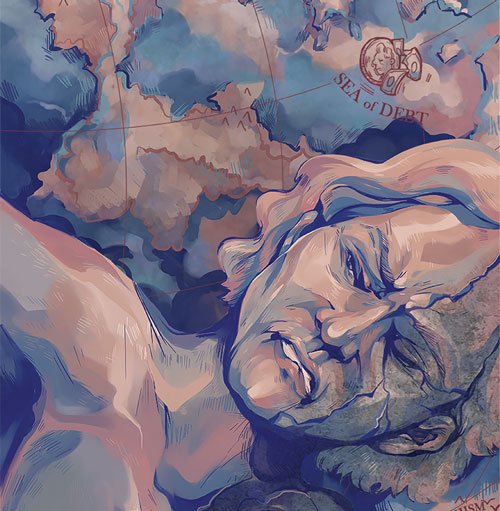 The key to success, however, is not spurts of motivation from time to time. Instead, Duckworth found accomplishments come from consistent hard work. In order to establish this rhythm, junior Caleb Dunafon started his path to prosperity early.

Dunafon grew older and began to stand out from the rest of his peers. Unlike other children his age who imagined becoming doctors or scientists when they grew up, Dunafon aspired to one day own the Taco Bells his father once did.

“[My vision of owning the Taco Bells] was off and on when I was younger,” Dunafon said. “I wanted to be a firefighter, astronaut, all of those, and I wanted to follow my dad’s footsteps, too. All the classic [jobs first,] then the Taco Bells.”

Dunafon could be the third generation Dunafon to own the Taco Bells in Columbia, as well as in North and South Dakota. Originally, Caleb Dunafon’s grandfather, David Dunafon, bought all the Taco Bells in the area when his son, Caleb Dunafon’s father, Cameron Dunafon, was 13 or 14 years old. From there, Cameron Dunafon worked in the stores and also went to business meetings with David Dunafon. Caleb Dunafon began to follow in his father’s footsteps when he was in eighth grade as he attended his first Taco Bell business meeting, though he visited other Taco Bell events before.

The summer before his freshman year, Caleb Dunafon began working at one of the Taco Bell stores in Columbia as a crew member. Caleb Dunafon worked the cash register, washed dishes and made sure the lobby and kitchen were clean. He realized his father would never simply hand down the business and decided he would have to work his way up the ranks to business owner if he wanted to take over some day.

Though Caleb Dunafon has a path already carved for his future career, other workers are not so lucky. While Caleb Dunafon will have to work for his position, Forbes.com found many people can hardly even get their foot in the door. Though the United States’ unemployment rate is the lowest it has been since 1960, there are still more than six million people unemployed and working to find a job.

One of the more common achievements many people work for besides a job, however, is acceptance into college. With 19.6 million students projected to attend college in 2018, according to a study by the National Center for Education Statistics, college is presumed to be the second biggest landmark after getting a license or graduating high school.

University of Missouri—Columbia Admissions officer Patrick Elmore believes college is a significant milestone because attending is often the first time students move away from their families.

“Being accepted to college [is] a wonderful goal. Attending college will continue to offer students opportunities that they might not have otherwise. It doesn’t matter if it is attending a trade school, community college or a four-year school,” Elmore said. “The reaction to being admitted to college varies greatly from student to student. For some, it is relief of finally accomplishing something that they have worked on for years. Others are thrilled to get into their dream school. It is always a positive impact to open an acceptance letter.”

Just as some students worked steadily to get accepted into college, senior Bradley Snyder has continuously worked toward a goal for over a decade, though more for personal enrichment than for academics. Snyder’s participation in Boy Scouts of America (BSA), an organization he joined in the first grade, aids his future by supplying him with invaluable life experience.

“I became a Boy Scout because I love hiking, camping and being in nature. I also joined because my dad was a Boy Scout, and he eventually got his [Eagle Scout,]” Snyder said. “I have a lot of friends who’ve stuck with me through scouting as well, and they keep me coming back [to the meetings] every week.”

“I became a Boy Scout because I love hiking, camping and being in nature. I also joined because my dad was a Boy Scout, and he eventually got his [Eagle Scout,]” Snyder said. “I have a lot of friends who’ve stuck with me through scouting as well, and they keep me coming back [to the meetings] every week.”

Earning the Eagle Scout recognition is the highest honor a member of BSA can receive. Scouts travel through seven ranks in order to earn their Eagle. If the member works fast, he can earn the achievement within 17 months as there is no minimum age for Eagle Scout recognition. Despite this, the ranking normally takes more than 10 years to achieve, stated by an article in scouting.org.

While some Boy Scouts start their journey early, others can earn honors much later in life, as Snyder’s father did. The timing in which one travels through the BSA ranking depends on the person and how hard they are willing to work. Likewise, the admittance to university depends solely on the person applying. While some students know from an early age they are going to college, others do not make the decision until much later, Elmore said. Either way, there are things that students can do to help prepare themselves.

“Other than those things it is important for students to know that even though college seems a long way off, the things they do in and out of the classroom will have an impact on what they want to do in the future,” Elmore said. “It doesn’t need to be an all-consuming thing in high school but it should be something that they consider.”

Whether a potential student just figured out where he or she wants to go, has known for a long time or just decided when filling out college applications, what a student does throughout his or her life matters. By volunteering, studying or taking standardized tests multiple times, many students work consistently to get accepted into university, Elmore said. Likewise, throughout his life, Snyder kept Scouts a constant throughout everything else he’s had to work on.

“Everybody works for their Eagle, but during the lengthy process of making it through the ranks. I’ve been working on becoming a teacher for younger scouts, on teaching myself the skills to survive each unique camping experience and being open minded about every journey I embark on,” Snyder said. “By working to be a better scout, you learn to make the most of every situation you come across.”

Snyder’s Boy Scout troop tests themselves through numerous mental and physical activities. Every year, Snyder said, Troop 707 hikes into the wilderness on a cold night, rain or snow, finds a way to sleep comfortably, builds a fire and cooks their own meals despite the circumstances. The taxing experience not only put scouting into a new perspective for Snyder but also made him work harder than he would on a regular basis.

During Snyder’s first Super Trip, a high adventure camping trip during the summer, he became truly ambitious about scouting and started thinking seriously about working for his Eagle Scout for the first time.

“It’s kind of the ultimate achievement in scouting. I’ve been involved for so long that it’d be a major let down if I didn’t get it,” Snyder said. “Also it looks incredible for future job applications, college applications and general merit as a human being.”

Just as Snyder recognized his goal to continue scouting and begin his journey into Boy Scouts at a young age, Caleb Dunafon also began his expedition in working towards a big-picture achievement by attending meetings with his father from a young age.

As Duckworth said in her TED talk, the achievement of goals is completed through endurance and grit, not just spurts of motivation. As a runner completes a marathon, Duckworth explains, a person completes goals by keeping a steady pace for extended periods of time. Because of his initiation into the Taco Bell business by attending business meetings at a young age, Caleb Dunafon got a head start to what might someday be his future and was able to keep the steady pace Duckworth advised.

“[Owning the Taco Bells] is one of my top two [goals],” Dunafon said. “My other one would be going into the military for a little bit, then go do Taco Bells because my dad told me to go do something and earn something first before coming into a business that I was kind of born into to make me feel accomplished and like I did something.”

What sacrifices have you made for your future? Let us know in the comments below.