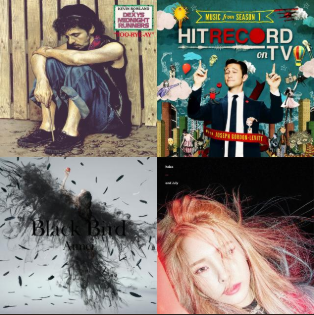 A collage of included album covers.

Approaching “World of Sounds” as a spotify playlist was incredibly hard. The goal was to strike a balance between showing off music from parts of the world less familiar to those and rock bridge while still presenting music that I would actually listen to.

To preface this I’d like to say that I went at this spotify from the angle of my westernized tastes, so as much as I’d like this to be a truly worldly playlist, it really isn’t all encompassing by any stretch. With that in mind, there is a reason that I felt inclined to write this greater than “that’s a cool idea for a playlist!”

I personally listen to music from all around the world all the time. Two primary reasons come to mind. The language barrier, while intimidating, can be a gift with music. Not only does it allow for music to be expressed differently than possible in English, but there is no mental interference.

Writing an essay? Throw on some K-POP! It is so much easier to write while listening to music when it isn’t jumbling your train of thought. Yet, even worldly music in English is appealing. The different accents, intonations and inflections of other parts of the English speaking world can add another level of interest and intricacy.

There is no way that I could have not chosen this song, HEIZE and DEAN are honestly my two favorite Korean artists. HEIZE’s vocals are absolutely spectacular, both hard hitting and heart wrenching in their execution. DEAN, on the other hand, sports casual and smooth vocals, but the power of his music stems from his exquisite RnB style, it’s the kind of music that makes you want to pull out some Michael Jackson style moves.

“And July” isn’t quite a sum of its parts, what is? That doesn’t stop it from being an absolute banger. The song is loaded with punchy bass beats and slick vocals, enough to carry the song through it’s more pop-esque parts. If the song peaks your interest at all, HEIZE’s “You, Clouds, Rain” and DEAN’s “Instagram” are my favorite songs of each respective artist and definitely worth a listen.

As someone with little to no intrigue into the world of Latin American music, it’s incredibly refreshing to hear a Latin American artist who doesn’t fall within the confines of “Despacito” and Mariachi. Siddhartha is a solo rock artist, originating out of Guadalajara. His music sounds eerily reminiscent of classic American rock bands, yet is staunchly chill.

Contrary to the name, Loco is an incredibly relaxing song, as the sparse instruments take the backburner as to highlight his soft and smooth vocals. It’s persistent, but not exhausting. It’s one of those songs that makes you feel like you’re in the music video, where the video is just you, living. I honestly have no idea how to explain that sentiment but it is something I absolutely love, and a sign of a great song.

The first time I heard Tash Sultana, it blared wildly out of my neighbors’ speakers as I walked by with my dog. They only moved into my neighborhood from brazil a couple years ago and within a couple of months I had fallen in love with their hippie family. Following the general theme of this playlist, Tash Sultana is an Australian artist whose music is genuine chill, psychedelic gold, primarily as a result of her raw and emotional vocals paired with a shredding electric guitar. The classic psychedelic riffs are simultaneously entrancing and relaxing and some of the best chill out music that I have stumbled upon. Honestly, her music is my studying go-to, it’s the definition of easy listening, and it’s most definitely worth your time.

Creating this playlist and excluding Bob Marley would be a crime. Even ignoring his world renown, his music is uncut relaxation gold. In “Three Little Birds,” the positive lyrics integrate perfectly with the slow and flowing Jamaican beats. While I don’t often listen to Marley, he was an incredibly positive influence on my parents lives and taste in music. I have multiple potent memories of stepping inside after a long day only to hear Marley’s voice blaring out of my dad’s speakers and feeling that pent up exhaustion slip away.

Dhafer Youssef is mellow, jazzy and most definitely weird. A combination of atypical (yet extremely impressive) vocals, distinctly Middle Eastern strings, and western-inspired Jazz piano makes for six minutes of really interesting jazz. I haven’t listened to much of his discography, but the sounds of his music are extremely reminiscent of my parents tastes, especially my dad’s (who, to be fair, likes everything). My dad spent a great part of his childhood living in Saudi Arabia, and the Middle Eastern influences, such as the use of an oud, present in this song mirror much of the music I heard growing up.

Another Japanese band, Indigo la End, is a bit of a symbol to me. It represents all of the music that I heard, loved, and will never find again. A year or two again I stumbled onto a Reddit thread praising the J-Rock band, only to forget all about the next morning. I spent months with mystery tunes dancing in my head before I finally rediscovered the band.

The song linked is the one I originally listened to on that night. While they aren’t exactly an incredibly stand out band, something about the rawness of their vocals and sound seals the deal for me.

I had not listened to this song before writing this playlist. It was a strong recommendation from a friend who raved, “I absolutely love this song, you have to put it in there.” After a couple playbacks as well as a day of compulsive whistling, I get why. “Adieu” is a French song from whatever “HitRECord on TV” is, even after a little research I’m still not sure.

What I am sure of is that I am addicted to the song. The incredibly personal and soft vocals set to a quick yet slightly creepy tempo make for enjoyable and easy listening. Furthermore, the beauty of French as a language accentuates the listenability of “Adieu” spectacularly.

Aimer is one of those rare few artists who (to me) doesn’t have a bad song, she’s single handedly responsible for my three month long J-Pop (and other genres) phase. Similar to HEIZE, her vocals are so incredibly polished and deliberate it’s almost impossible not to enjoy something that has her name on it. Kyoukara Omoide is one of her much older songs, only recently remastered, and it’s probably my favorite sad boi hours song of all time. Her powerful vocals are reminiscent of Adele in how they seem hand crafted for these powerful and purposeful sad songs.

“Come on Eileen” is one of the only truly jaunty songs in this playlist. It’s a song that is thrumming with energy and is just pure sing along fun. Yet, calling Dexys Midnight Runners a “worldly band” is a bit of a stretch, as London is about as western as you can get outside of the US. The reason that I included them is because of the vocals (unsurprising at this point), Kevin Rowland’s accent and inflections are a prime example of how a song can take on an entirely different sound via nothing more than the natural inflections in the singer’s voice.

Until last spring I didn’t really think much of M.I.A. It wasn’t until I saw the True/False documentary titled “MATANGI / MAYA / M.I.A.” It showcased the intricacies of her music and the depth of her life story. Maya Arulpragasam is much more than a pop star out of London, the vast majority of her music has humanitarian and intensely political issues hidden within. The primary target of music was aimed at the Sri Lankan conflicts intertwined with her life. The story of M.I.A is way more than I can fit in this little description, the movie is released on Dec. 11th on iTunes, watch it.

As for her music, at first glance, M.I.A.’s music fits into the pop formula, sporting repetitive, catchy and seemingly empty lyrics, yet that isn’t meant to undermine, they excel at what they do. While writing this paragraph, multiple people looked over my shoulder to immediately break out singing, shouting out the chorus. At second glance, it takes a new depth, as it is chalk full of worldly (primarily sri lankan inspired) sounds and references and aforementioned progressive humanitarian and political agendas.

“Winter” is relentless, unforgiving and beautiful. All of the Italian composers’ seasons are incredible and heavily deserving of a place on this list, yet there is something about “Winter” that, personally, edges it above the rest. I’d like to say that it’s how the rampant intensity contrasts the lighter, wintry sounds, creating a fervent and soft composition, but I think it’s something more personal. Maybe it’s my vague memories of the song playing as my family opened presents on Christmas day; maybe it’s attribution to the extremely bingeable Netflix series “Chef’s Table” who’s intro combines a beautiful rendition of “Winter” alongside a well composed montage of beautiful foods and cheffy b-roll. Whatever it is, “Winter” is easily crowned my favorite classical European composition.

The list wasn’t all encompassing. It didn’t reach every corner of the globe and looking back it remained pretty western, but I’m not that worried about it. My intent was to help you broaden your musical repertoire in some way or another.

on preparing for finals