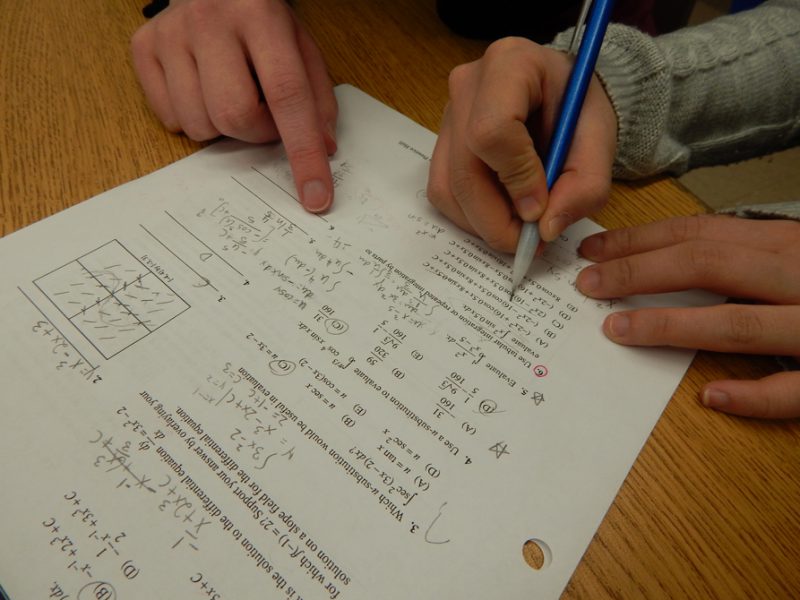 The change ultimately came down to the numbers.  Across the entire district, Hibbard said there were never more than 10 students in one year who took the course as a 6th grader.

“The decision was made based on years of data on enrollment along with supports that had to be in place for it to happen,” Hibbard said. “What I mean by that is: When a student takes algebra in the [sixth] grade that puts them in line to take Algebra 2 in the [eighth] grade.”

Freshman Akhil Elangovan, who took Algebra 1 in 6th grade, took a test to qualify for the course. He said in high school classes such as Advanced Placement (AP) Physics, taking Algebra 1 in advance was beneficial.  Additionally, Elangovan said it is unfair that kids are not challenged, as they should expand their learning horizon.

“I think that the kids should be entitled to the ability to challenge themselves,” Elangovan said. “The ones who do are always very motivated, so I think that [Algebra 1 in 6th grade] should still be a thing”

Contrarily, junior Rachael Erickson believes the change is fair in some aspects, there are other parts that make her questions the idea of withholding a course from a student.

“The district has a duty to make sure students aren’t pushing themselves to do courses that they won’t be able to learn from as fully as slower courses,” Erickson said. “Early Algebra 1 enrollment is also harder for kids with fewer educational networks and resources to access, so I feel like the current policy has the capacity to be discriminatory. However, there are definitely some kids who are just great at math, and holding them back is not the best way to go either, so I guess I’m pretty much split about the policy change.”

Erickson took the course as a seventh grader, and is now in AP Calculus, and to some extent, she has a bit of regret in taking a course early.

“Especially last year during precalc and in eighth grade during Algebra 2, I felt like I could have benefited from another year of basic math to lay the groundwork for higher math skills, and that skipping that year made those classes much harder for me,” Erikson said. “However, at this point, I’m really grateful that I took an accelerated math path because it has made taking standardized tests much easier as all the math is stuff I already know and have several years of practice with.”

Applying math to other areas is what Elangovan encourages as a substitute for students who are unable to enroll in an accelerated course. He suggests Mathcounts or the American Mathematics Competition to continue showcasing math skills.

“Math is applicable to a large portion of jobs,” Elangovan said. “So if kids excel in that, it serves as a foundation and opens up their future.”

As an alternative to the change, Hibbard said students can still take algebra in the seventh grade, putting them in line to Calculus BC as a junior, and a university course level in their senior year.

“It was difficult to staff a class that may only have one student. This had large implications on all the other math courses at the middle school,” Hibbard said. “We also considered the qualifications that the teacher needed to have middle school math teachers with the correct certificate to teach that advanced level course.”

What do you think about the change? Let us know in the comments below.

I definitely think this is a mistake – kids who excel at math should be able to take the course they want to. The small number of students shouldn’t be an issue since there are collective math classes for middle schools.

I don’t think the change is very beneficial, if kids are smart enough and want to work hard they should be able to get into those challenging courses.

This news story had a good introduction, and relevant, interesting pieces of information!

At first glance I don’t like the change. If a kid desplays the skill set to perform at a higher level they should be allowed to do so. Don’t hold them back just to say you did.