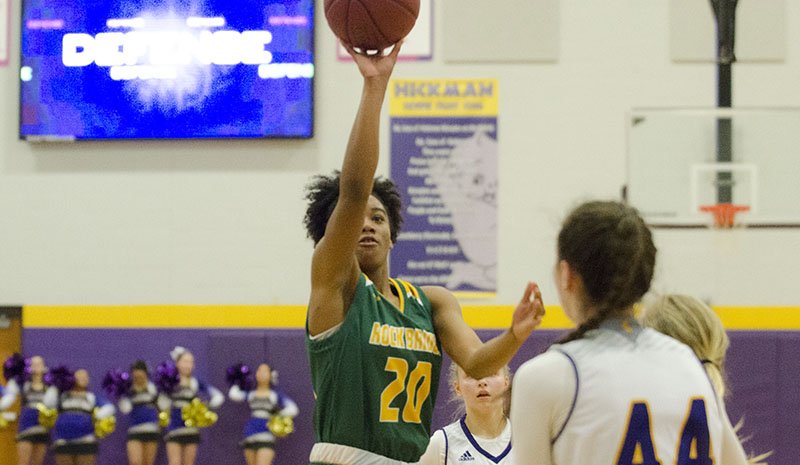 Junior Sanaa' St. Andre, while new to RBHS, has given the Bruins a new look while bringing both speed and a defensive edge to the team. St. Andre was able to help hold the Kewpies to minimal fast breaks, helping lead RBHS to the victory.

The RBHS girls’ basketball team went up against Francis Howell Central Saturday, Jan. 26. The quick back and forth game ended with the Bruins on top (47-46).

“It was definitely a challenge,” junior guard Eryn Puett said. “We came out strong in the first quarter then struggled through the second and the third but we came together in the end and got the win.”

“We knew going into the game it was going to be very difficult since we already played them once before,” senior forward Maddie Collier said.

By halftime the Bruins were falling behind (14-22). The team did not give up but were still behind by eight points after third quarter (33-41).

Closing the gap between itself and the Spartans, the team was (44-46) with 1:19 left in the final quarter.

The Bruins succeeded this close up by staying focused on the game and keeping their cool.

“We followed the scouting report and listen to what the coaches say,” Collier said. “No we didn’t feel any pressure [towards the end of the game.]”

Junior guard Sanaa’ St. Andre tied up the score and got the foul. With 34.6 seconds to go, Andre made the free throw, securing the Bruin win.

“Strategies that were successful were getting the ball to the middle and just coming together as a team in the end,” Puett said. “It was great to win that game especially how hard we worked at the end of that game.”

Were you at the game to cheer on the Bruins? Let us know in the comments below.