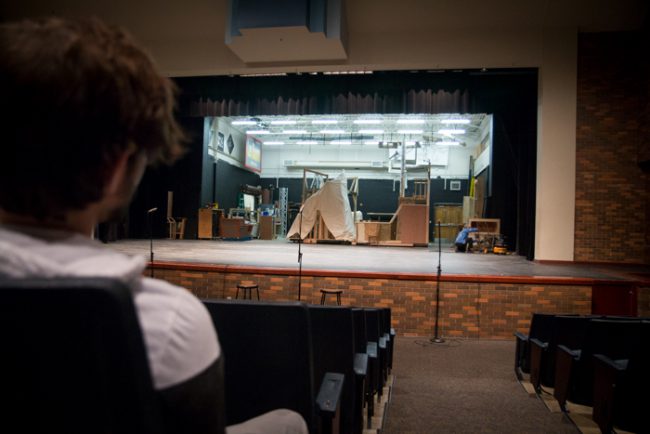 Friday, March 1, RBHS Advanced Acting class will travel to Mexico High School in Mexico, Missouri to compete in a theater district competition. The group will load up the bus at 7:30 a.m. and depart from RBHS at 7:45 a.m. for the 50-minute drive.

This year’s competition, however, provides a few bumpy complications. Seniors Polina Kopeikin, Jocelyn Heimsoth and Bailey Long have all been deeply involved in RBHS’s theater program since their freshman year and all have played leads in an all school play, Advanced Acting performances and in RBHS’s International Thespian Society.

The trio all planned on going to perform for the district event; however, ran into issues with Missouri State High School Activities Association (MSHSAA) eligibility. All three girls take 5 credit hour classes, which is not enough to meet MSHSAA requirements. Instead of removing the team from the show altogether, Advanced Acting teacher Holly Kerns appointed them as directors for the two performances.

Kopeikin and Heimsoth are co-directing the Reader’s Theater piece. Reader’s Theater, Kopeikin said, is a show that has no props or set, except a few boxes or chairs, and actors are allowed to have their scripts on stage with them. Kopeikin, though it is her first time at theater districts, has had experience with leadership in the past and feels confident in her abilities. Additionally, Heimsoth is an Editor-in-Chief of the yearbook and said she could easily transfer her leadership abilities to the new project.

“It’s really all about being organized and setting goals for one another. Polina and I make sure that everyone is on task and make sure that everyone is on the same page regarding timing, blocking and lines since Reader’s Theater is very reliant on others,” Heimsoth said. “We want everyone to work together to build a script that will flow together well and tell its own kind of story, and we want to encourage them to be as creative as possible.”

The class voted on what topic it wanted for the Reader’s Theater show. In the end, the winning topic was about art and how humans can relate to art. Kopeikin, Heimsoth and actors junior Michael Bledsoe and senior Ashley Livingston all wrote the scripts for the show.  The four worked together to find meaning and relevance in the topic.

“Usually a reader’s theater is created to deliver some sort of message to the audience. Ours consists of a bunch of smaller individual scenes that are knitted together with chanting and quotes,” Kopeikin said. “It’s called the ‘State of Art’ and we’re working on answering the question, ‘How is art central to our identities as humans?’ Our answer is that art can be anything you make it, that its goal is to make people happy and that’s why we make and enjoy it, to be happy. Anything that you’ve made that’s made you or someone else happy, that is art.”

The original writing portion of Reader’s Theater adds to the show’s appeal and personal relevance, Heimsoth said. The process, Kopeikin explained, was simple and without much debate, as the team was always on the same page.

“We brainstormed some ideas for how we would answer our own question, then once we had a ball rolling, we decided on a theme of game shows for our piece. Once we decided that, we each wrote a script for a

game show that somehow conveyed one of the messages we had. Then, we each also wrote a personal piece about something related to the ideas we had that we were super passionate about,” Kopeikin said. “I, for example, am easily moved by displays of political inequality being addressed, so I wrote a monologue about a YouTuber announcing to his watchers that his dad didn’t let him pursue his dream of acting and singing in musicals because it wasn’t ‘masculine.’”

In addition to Reader’s Theater, the other half of the class is performing a one act show called “Early Frost.” Long is the sole director for the one act. As she had been the director of the chorus for the all school play “One Man, Two Guvnors” this year, she has the most experience in directing a theater performance. Also, she is the only participant in the class who went to the theater district competition last year and knows what’s expected of her.

“We have been working on both scenes in the acting class, and hopefully they will be ready by competition. I directed the one act scene. I was responsible for blocking it and helping them with character work,” Long said. “I also had to talk with the tech and the costumer to make sure we are all on the same page. It’s been really stressful to do, but I think I did a good job and I think we are almost ready.”

The hardest part about preparation has been the absence of Kerns. Sunday, Feb. 3, Kerns had her baby and

left for maternity leave. She has come back to school on occasion to help the class, but cannot commit as much time as the students may need.

“We have just done the exact same thing that Kerns normally does, and it’s been working pretty well. We have been blocking the same way she does, pacing our performances and doing character work the same,” Long said. “It’s been pretty stressful because she isn’t here to answer questions, but we have been using our best judgment.”

Because of the trio’s absence, the class asked two other acting students in RBHS to fill their spots and join the performance. The two, sophomore Andrew Beaty and sophomore Grace Holdiman, were both cast members of “One Man, Two Guvnors.” Both are great friends with the Advanced Acting students and were happy Kerns invited them to the district competition.

“I was on my way to a dentist appointment when Polina texted me and told me I had to go to the acting classroom [as soon as possible]. . . she made it sound really serious as a joke and I got really worried,” Holdiman said. “But then Kerns called me and explained that they wanted me to fill in and I was really excited and shocked at the same time. I agreed immediately, and was still in shock for the rest of the day.”

Holdiman plays an elderly woman in the one act performance. The theme of the show is a spooky thriller with paranormal undertones, Holdiman said. For her character specifically, she’s had to work on new acting techniques and develop new skills.

“Other than the normal learning lines, I’ve had to practice speaking much lower in my chest voice in order to sound much older,” Holdiman said.”I’ve also been practicing walking like an old person and had to build a character that is much different than what I’m used to.”

Heimsoth believes the group is ready to take the stage and show their best performance. Though she wishes she could be acting with her classmates, she feels connected with them as she had put herself in the show by writing parts of the scenes.

“Reader’s Theater is something that all of us contribute to, so we can all form an original piece. Despite it being one show and us all being in sync, we all have our own voices, and I think that’s why I value it so much,” Heimsoth said. “We take one theme that we come up with together and we all interpret it based off of our lives and past experiences. It’s really fun having the opportunity to work with your friends on creating something you’re all passionate about.”