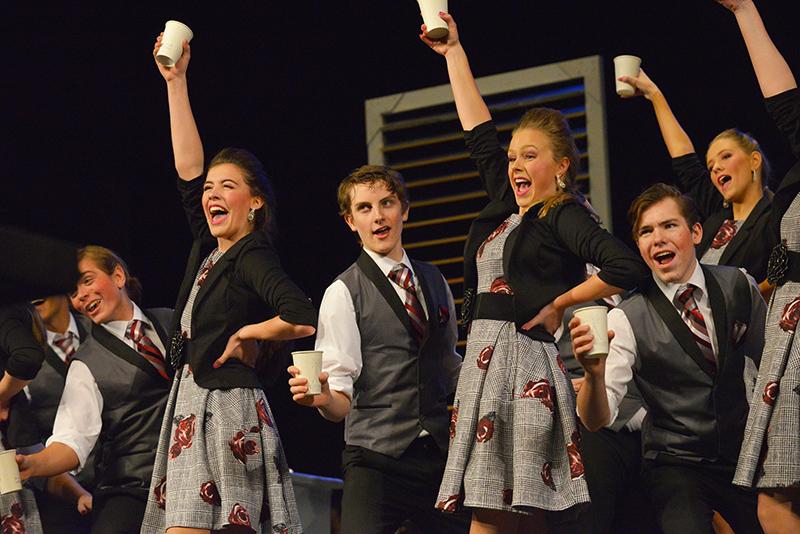 City Lights raises their cups of coffee during their show. This portion of the performance was all about a work day in an office, and how they could not get through it without a cup of black coffee.

On the evening of Thursday, Jan. 31, the RBHS Performing Arts Center filled with song for the annual Show Choir Benefit Concert. The event has become a tradition among the choirs at RBHS as well as throughout Columbia.

“A number of years ago, there was an incident and a law enforcement official was killed near Rock Bridge,” Sophomore City Lights member Xander Kent said. “The show choir then held a concert and all the proceeds went to a charity called ‘Officer Down’ and it then became an annual thing.”

Kent said show choir members vote on a different charity to give the event’s proceeds to each year. This year,  they chose the City of Refuge, a non-profit organization created to help refugees and immigrants in Mid-Missouri. At the end of the night, the show choirs presented City of Refuge with a check for $3,058.

“Satin n’ Lace is our sister choir and it is really important that we are there to support them. We are like one big family and we stand in the wings to support each other’s shows,” Kent said. “We started performing with Battalion last year and it has also become sort of a tradition. We are also really supportive of each other’s shows and they have become sort of like our ‘extended family’ in a way.”

Not only does the Benefit Concert allow parents and friends to see multiple shows while giving to the community, but it also lets the show choirs get exposure to performing in front of an audience before their upcoming competition season.

The show choirs will watch the video recordings of their performances to deal with any last minute adjustments before competing in front of a judge. Performing in a stress-free environment without any judgement also allows the choir to feel comfortable about their show and to enjoy their time on stage.

“We all just connect on a really deep level when we are performing,” Kent said. “We just have so much fun and it’s a really great experience.”

Voice your own love

This was such a cool event to read about! The pictures added a lot to the article because they gave me a visual.

The story was very interesting to read. I didn’t know Battle also participated in this concert. The photos are really nice and the article gave a lot of insight into what the concert was about.