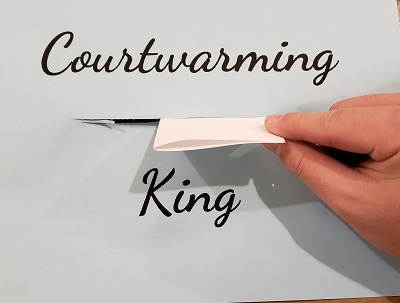 Today, all students of RBHS can vote for the 2019 Courtwarming King. Out of a ten candidate court, one will be named king. The link will be on the RBHS homepage.

Selection for the court began around three weeks ago from open nominations. From there, a large pool of 21 students was narrowed to a 10 man court.

Open nominations were submitted by Google Form. It is structured with a nomination slot, a reasoning for the candidate and a place for student ID to ensure no duplicate nominations. Student Council sponsor Kelley Wittenborn created the form and tallied the nomination count.

“We just think that it’s really important [to give a response] because we like to hear legitimate reasons why these students should represent the senior class at RBHS,” Wittenborn said. ”As for the numbers, we want to avoid false votes.”

The benchmark number for students to get on the candidates list, or the long list, was two nominations. Wittenborn said the reason for the low threshold was because of low voter turnout for king nominations compared to queen nominations, where three nominations were needed.

Wittenborn said while she rarely throws out certain nominations, she does not accept illegitimate answers for why a person should be nominated.

“I’m not saying that we automatically knock it out,” Wittenborn said, “but if it’s a reason that’s completely inappropriate, I usually eliminate those, but I don’t think it’s ever happened that a student didn’t make it to the next round because of this.”

After the long list is finalized, seniors, alone, vote for the top ten candidates. Wittenborn said in a case of a tie, there could be an eleven-person court.

Wittenborn also stated emotions can run high during the nomination process when students do not reach the threshold of votes; however, Wittenborn stands firm to not publish the results.

“We do not and will not ever publish the data,” Wittenborn said. “Beyond a respect for the privacy of all students, including those who do or do not receive nominations or votes, this helps us to tremendously avoid issues of drama or gossip around the school. Voting information is private but legitimate. We use Google Forms to run all data, and myself, Mr. Egan, and Dr. Rukstad look at and verify the results before they are announced.”

Junior Andrew Apostol, thinks that nomination results should be transparent.

“ I think the results should be transparent because the candidates or should be able to know how much they won by or lost by,” Apostol said.

Senior Catie Polo, on the other hand, thinks that nominations should be private.

“ I think the results should be private because peer pressure [would play a role in voting]. It would make you vote for the person with the most votes.”

The policy of keeping votes and nominations private is longstanding at RBHS. Wittenborn said it was passed on to her when she took the title of student council sponsor.

“The process of nominating and voting for court and king is the same that it has been since before I took over Student Council,” Wittenborn said. “I didn’t set the parameters, but I do agree with and support them.”

Sophomore Brandon Kim is a writer for The Rock and Bearing News. He loves to travel and go outside. In has free time, he likes to listen to music, play the violin and read a good book.

I think it’s a really good idea to not show the results of the winners compared to the other Courtwarming king, and I hope the person who wins is proud!