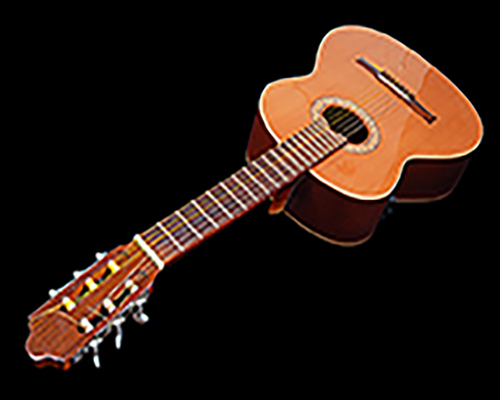 A bland photo of an acoustic guitar to compliment this bland song.

Sometimes music charts show the worst popular artists have to offer, and that was no more evident than 2018, when the musical landscape was graced by Maroon 5’s biggest hit yet. The song in question is “Girls Like You” by Maroon 5, the store brand of pop bands. “Girls Like You” has and will remain a dominant part of the radio cycle for a long time due to its popularity. It takes about 12 minutes for me to drive to school. Within that time span, there is a good chance that “Girls Like You” plays on the radio. When the song comes on, I don’t bother to change the channel. It’s a listenable song. I can be thinking about something else and not recognize its musical notes wafting in my car. Usually a song I don’t like will grab my attention; The instant recognition and swell of dissonance will make me switch to another station. But not “Girls Like You”, a song that I consider worst-of-the-decade material. The problems with this song do not come from the surface level of the track, but are deeply layered problems that are in the core of all Maroon 5’s decade of sellout singles and audio backwash. Examining the problems of “Girls Like You” exemplify the worst in not just commercial and corporate music, but also in the worst of bands that will lose all semblance of original thought in order to stay on the charts.

My disdain for “Girls Like You” isn’t a universal belief. It was still a number one hit in the United States. The song has obviously struck a chord with many of its listeners. Not just one chord, actually, but four. “Girls Like You” uses the ever popular I-V-vi-IV chord progression. In more understandable terms, the song uses the C, G, Am, and F chords in progression as the structure of the song. This specific chord progression is notorious for being used in popular songs for decades. Music spanning from “Take Me Home, Country Roads” by John Denver to “Wannabe” by the Spice Girls to “Despacito” by Luis Fonsi use it. This chord progression is heavily used because of its sonic accessibility. It sounds pleasant and appealing to a wide amount of audiences. “Girls Like You” is not a bad song because it uses these chords, but the fact that it does completely nothing with them. The instrumental to this song is composed of a drowned out plucky guitar loop and synth fragments. There is not much there besides the bare essentials, making the usage of chord progression not an inspired one, but more of a money fueled choice. If Maroon 5 was a band that valued only making music they wanted to make, this song would have never been made. I refuse to believe even Adam Levine would look at the finished product and think it was good. They obviously chose the chords because they wanted the song to have mass appeal, and then didn’t do anything to mold it into their own work, making the instrumental really just the chord progression itself. The aforementioned songs that use the same progression are all different genres and all have a memorable chorus or moments that breathe life into them. If the creators of “Girls Like You” wanted to make this song stand out at all, they wouldn’t make this flat instrumental that sounds like elevator music. Most songs will have an instrumental that will make you feel a certain emotion or mood, for example piano ballads are usually filled with sentiments of romance or sadness. This song is a blank slate. “Girls Like You” has almost a non instrumental that inspires nothing from the listener.

The lyrics of the song are not doing it any favors. Some genres thrive on weak and boring musical elements because they have substance in their lyrics. Slow piano ballads are so bare bones in instrumentation because the songwriter or performer wants you to pay attention to what they say. “Girls Like You” has a total of six writers, including Adam Levine, the lead singer of Maroon 5. Considering the atmospheric wasteland of echoes that is the musical structure of the song, the lyrics could possibly elevate the song. The lyrics tell a fragmented story about a rocky relationship that is finally coming back together. Most of the lines in the song don’t come together either, but i’d like to think that the song is just going through a best-hits compilation of the relationship. The short verses are about the rocky bits of the relationship, while the chorus is about the rekindling of the relationship. There is also a Cardi B verse, which, considering it was added from a remix, doesn’t connect with the rest of the song.

The entire song really isn’t trying too hard to make sense, and is more just hitting the important notes of romance, breakup and partying. I won’t rag on the lyrics too hard for being asinine. Most charting pop and rap songs have the same templates of love, sex, bragging, problems that this song has. The problem is that most of the other charting songs also have something else going on, whether it be better production or better singers. Adam Levine probably sang this song in one take, he doesn’t sound like he is trying. Cardi B sounds like she is trying, which is good, but the instrumental is so flat her verse sounds out of place. The lyrics are just like the rest of the song. Adam Levine and friends wanted to make an accessible pop song, so they did the bare minimum and added a rap verse to give it wider appeal.

Even compared to its contemporaries, “Girls Like You” is still the inferior song. Let me compare “Girls Like You” to another currently-charting hit, “Eastside” by Benny Blanco, Khalid and Halsey. “Eastside” is also a song about relationships with a male and female artist, a spacey guitar loop and percussive elements. The difference between “Eastside” and “Girls Like You” is that “Eastside” has a thought out story about an old romance that was once blossoming. The better storytelling is also accentuated by compelling vocals and punchy percussion elements that keep the beat moving forward. In other words, “Eastside” tried to do something with itself. Most modern pop songs have mediocre lyrics, but are more experimental in their production, which I would argue is the more important aspect of a song. That’s why rap songs bragging about money and girls are still so popular. The lyrics don’t need innovation, the production does, and the modern rap scene I would argue is the most diverse it has ever been. Different eras of popular music are diverse because things move in and out of fashion. There is always further development to be had in each genre, including pop music. A song today usually wouldn’t sound like a song from the 2000’s unless it was on purpose. “Girls Like You” shows none of the innovation in popular music because it doesn’t try anything. This song could be made 10 years ago and it wouldn’t matter, it would still sound as bland and as corporate as it does now.

“Girls Like You” does the worst thing a pop song can do: be utterly void of anything interesting. The producers and writers of this song took the minimum steps required to make a hit song, and it became one of the most popular songs of all time. Even people who like this song probably have no strong feelings or connection to it. Maroon 5, a band with seven members, has two noticeable instruments in this song. They aren’t making this song for artistic reasons or to even appease a fan base, they are doing it solely for money. This is even more evident in the music video, where the camera circles around Adam Levine as many famous female figures such as Ellen Degeneres come in and out of the frame. Annotated on Genius, Adam Levine said this about the music video in an interview with The Independent: “‘Girls Like You’ is this cute, quite simple song, but when you add the video it gives it a whole other level.” That “whole other level” is showing strong female figures to coincide with the current political movements that women are helping.

The music video banks off of the positive chorus for audiences to think that this is some sort of women’s pride anthem. Essentially Maroon 5 is using political activism to force their bland cardboard of a song to have some semblance of purpose. Not only does it not succeed at doing that, it just makes the music video look like another cash grab, which it probably was. Nothing in the musical production or songwriting indicate that this song is nothing more than a market tested single. It’s almost insulting to think about. This is the exact song that record executives think Americans like. I guess they were right, but in the process made the most soulless song imaginable.This isn’t some grand proclamation on relationship problems in America or testament to the power of women, it’s music made for the background. Maroon 5 has managed to coast the last 10 years off of name recognition and seeing how many times they can sell out for profit. They finally hit rock bottom, and they know it. Their super bowl performance began with their first three singles from the early 2000s. Levine knows there will be a point where those songs can’t sustain their relevance any further. If “Girls Like You” is any indication, that time is about up.

Waiting to change the world

I myself feel as tho he needs a “girls like you” for the gains of fame and not just for a relationship given that when he comes through he needs a girl like her.

Why not just always have her and not sound desperate to have more than just one on any level?