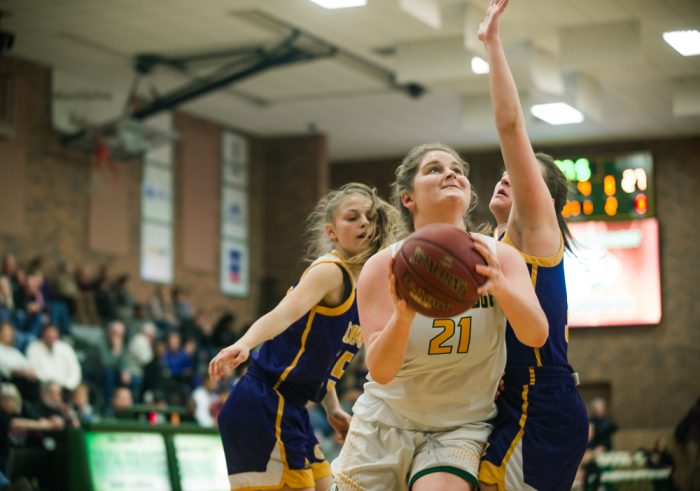 The Lady Bruins won the first round of semi-finals in the district basketball tournament. The team played Feb. 25 against Smith Cotton High School, winning (65-46). The Bruins came into the game with a seasonal record of [13-7]. Senior forward Mary Capron said the team treats every game the same and expects each player to do what’s expected of them.

“Everything from here on out is an opportunity: we want to seize every chance we get and play as hard as possible,” Capron said. “Our goal is to do everything in our power to control what we can control and play some great basketball.”

Varsity Head coach Jill Nagel said she really liked the intensity of the defense, but the team needed to cover its bases more on ball play. Before the game, the players put together a scouting report and watched footage of the opposing team to create counter plays for its strengths.

“I thought we had some really good moments offensively and defensively but need to do a better job valuing the ball at times,” Nagel said.

Both Capron and Nagel said the team performed well together last night at the start of the game, but still had room for improvement.

“Consistency is a big thing we need to improve upon,” Carpon said. “We have great moments, but then have a few bad plays. Once we gain consistency we’ll be able to have a full game of great moments rather than bits and pieces.”

Both Nagel and Capron said the goal for the remaining district games is working on defense and ensuring the girl’s executes plays to the best of its ability.

“Everything from here on out is an opportunity. We want to seize every chance we get and play as hard as possible,” Capron said. “Our goal is to do everything in our power to control what we can control and play some great basketball.”

Nagel said the girls will continue to play as they have practiced all season, to play and focus on the principles of the game.

“Playoffs is all about tweaking the little things to make sure you are as sharp as possible,” Nagel said.

What did you think of the Lady Bruins game last night? Let us know in the comments below!