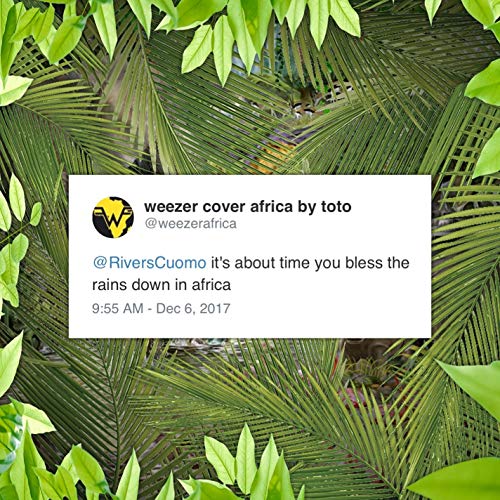 In late May 2018, Weezer released a cover of Toto’s “Africa” in response to a fan campaign started by 14-year-old Mary Klym of Ohio. Klym had a whole Twitter account dedicated to getting Weezer to cover the song, her most notable tweet saying “it’s about time you bless the rains down in Africa.” The tweet, directed toward frontman Rivers Cuomo, was then used for the artwork for the single.

With praise from critics and Toto themselves responding with a cover of Weezer’s “Hash Pipe,” the band’s cover of “Africa” made it to number one on the Billboard 100 Alternative Songs Chart August 18, 2018. Weezer, having just released their 11th studio album in late 2017, announced they would release their 12th studio album titled “Black Album” March 1, 2019. “Can’t Knock the Hustle,” the first single off the project, was dropped mid October along with the album announcement. With only a little over a month left until the next album, the band unexpectedly released “The Teal Album,” January 24, 2019 consisting of covers of different classic songs. Weezer included “Take On Me” originally by A-Ha, “Sweet Dreams (Are Made Of This)” by Eurythmics and “Billie Jean” by Michael Jackson. The band added their cover of “Africa” for the first track.

“Teal Album” is a different take on classic songs, adding a Weezer touch without too much originality. The structure of each song stays the same but adds slight additions like the raw guitar melodies instead of the very polished sound of the originals leaves an aftertaste of the band’s signature sound. Although this might seem like a bad thing at first, Weezer is known for their simple and clear garage band type songs. The simplicity of the covers is Weezer at their best being self-aware. Each song gets better with each take, as they all seem very close to the original version. The biggest difference between the original and Weezer’s versions is that the lyrics are sung very clearly. For casual listeners, Weezer’s versions sound completely new when it comes to lyrics.

The track that stands out the most in this instance would be “Billie Jean,” which sounds melodically identical to the original 1982 “Thriller,” but with enunciated lyrics. Weezer frontman Rivers Cuomo still gives it his all, with impressive vocals on 9 of the 10 tracks. Drummer Brian Bell sings lead on the cover of Black Sabbath’s “Paranoid,” a very unexpected but welcome addition to the track. Bell does an almost spot on Ozzy Osbourne impression, which, although adding to the unoriginality, is a nostalgia-filled banger. The heavier sounding track adds spice to the album and keeps it moving with more energy and a new voice.

The cover of “Happy Together” originally by The Turtles is outstanding; the most Weezer-esque cover on the album. Although each track adds a bit more distortion to the guitar melodies, “Happy Together” arguably sounds the most updated, with “Mr. Blue Sky” by Electric Light Orchestra coming in close second.

The closing song, Ben E. King’s classic “Stand By Me” is the perfect choice to end the album. Weezer sticks pretty close to the original, but the power behind it sounds like it comes from a concert. While King’s version gives the urge to sing along, Weezer’s version almost evokes the voice of the people singing along with the song. Despite most of the tracks on “Teal Album” lacking originality, they all have the classic Weezer touch. Classics like “Say It Ain’t So” and “Island in the Sun” have beach vibes that remind listeners of high school days and having fun. That same vibe is brought to all the songs on “Teal Album.” For an unexpected album that was released with no advertising whatsoever, Weezer’s “Teal Album” is a happy surprise filled with nostalgic classics. While some of the tracks lack originality, the album itself is a rather daring feat by even a fairly respected band like Weezer. For the band to use the title “Teal Album,” adding it to the line of color coded albums started with their debut “Blue Album,” really shows the confidence behind the project.