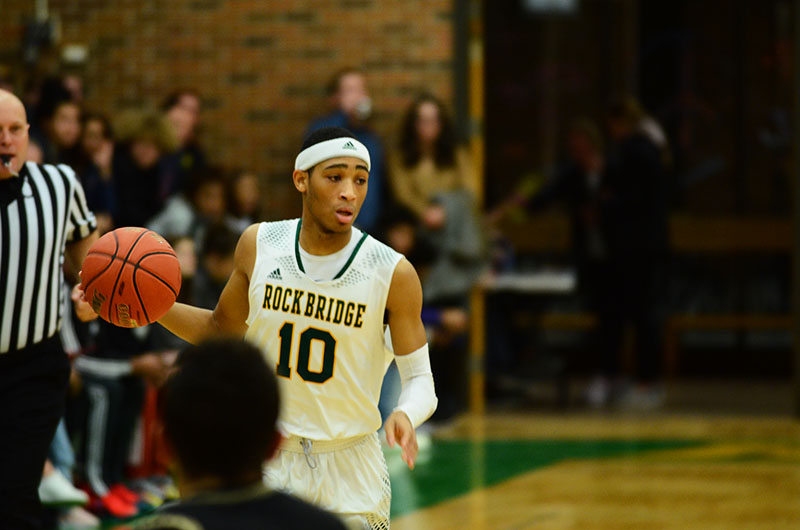 March 1, at the district championship game, senior Dajuan Harris calculates his next move, as he prepares to pass to a teammate. Photo by George Frey.

The Bruins advance in their pursuit of their first state championship title in school history by another large margin of victory. Led by seniors Isiaih Mosley and Dajuan Harris with a combined 49 points, the Bruins overcame the final barrier separating them from their second consecutive trip to the final four in Springfield, Mo. Saturday, March 9 in Bolivar, Mo, RBHS won (77-57) over the Kickapoo High School (KHS) Chiefs.

Assistant coach Jordan Showalter attributes the Bruins’ win to their strength throughout the game. The Bruins were also fundamentally sound, as they went 16 of 17 from the free throw line, only further extending their lead over the Chiefs.

“We got off to a quick start, and we finished the game strong. Usually if you can do both of those things, you give yourself a good chance to win,” Showalter said. “We weren’t perfect, but I was proud of our effort. When Kickapoo was trying to make a run to get back into it, we took care of the basketball and we hit our free throws.”

Senior guard Spencer Miles echoes Showalter’s sentiments regarding the Bruins’ overall endurance. The team has shown tremendous drive over the course of the year, but even more so in the recent weeks.

“There were things we could have done better, surely,” Miles said. “But I’m really proud of the way we fight. We’re ready to go.”

Showalter sees each game as an opportunity to learn and grow, but also recognizes the importance of kids being kids. The post-game conversation in the locker room was also incredibly positive, Showalter said.

“I was just proud of them for getting the job done and being able to soak up the moment in the locker room after the game,” Showalter said. “The high school years are fleeting and not everyone gets to experience the feeling of going to a final four.”

Miles feels his team is well prepared to take on this next round of postseason play. He feels assured knowing the Bruins can handle the ball on both sides of the court.

“I feel extremely confident,” Miles said. “We have the best backcourt in the state. I know that we can and will score.”

The Bruins will face Lee’s Summit North in the state semifinals Friday, March 15 at JQH Arena in Springfield, Mo. RBHS will be offering a spirit bus for the trip, according to a tweet by @RBHSBruCrew.

“These guys have punched their ticket to back-to-back final fours, and they earned it,” Showalter said. “It’s fun watching them enjoy that journey.”

Are you riding the spirit bus to the final four? Let us know in the comments below!