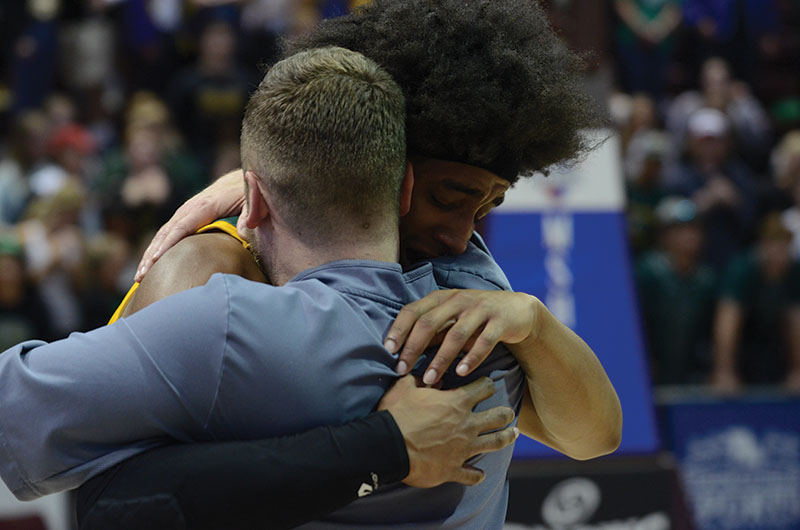 In a press conference after the game, head coach Jim Scanlon and seniors Noah Patrick and Dajuan Harris spoke with the media.

“It just kind of happens. You just never know if you’re going to be on the good side or the bad side, but we were down eight going into the last quarter,” Scanlon said. “We changed up, put a little pressure on; it helped us. I think once we tied it, the momentum and the feeling with emotion really energized our team.”
Trailing CBC by eight going into the fourth quarter, the final minutes of the game proved crucial.
“Every free throw they shot was under pressure situation, but we work on that in practice, and we’ve been really good at it all year,” Scanlon said. “I think if you hit free throws, you have a pretty good chance of winning.”
Patrick had two big steals during the fourth quarter. In the first, Patrick jumped the passing lane by the sideline and made a layup in the transition.
“Then the second one, [the player] was driving left, and I just had a knack that he was going to go back right because he’s a right handed player,” Patrick said. “So I just jumped his right side and fortunately got the ball out.”
As for winning the first boys’ basketball state title in RBHS history, Scanlon simply said it was a “great feeling.”

“Because I told them

in the locker room nobody’s going to remember who scores 30 and 20 if we didn’t win the game,” Scanlon said. “It’s the guy next to you. It’s your teammate; they are going to know who won the game. I don’t care who scores. It doesn’t make any difference to me. I probably won’t even look at the scorebook, but I know the team won the game. And they carried out a plan, and they held together.”