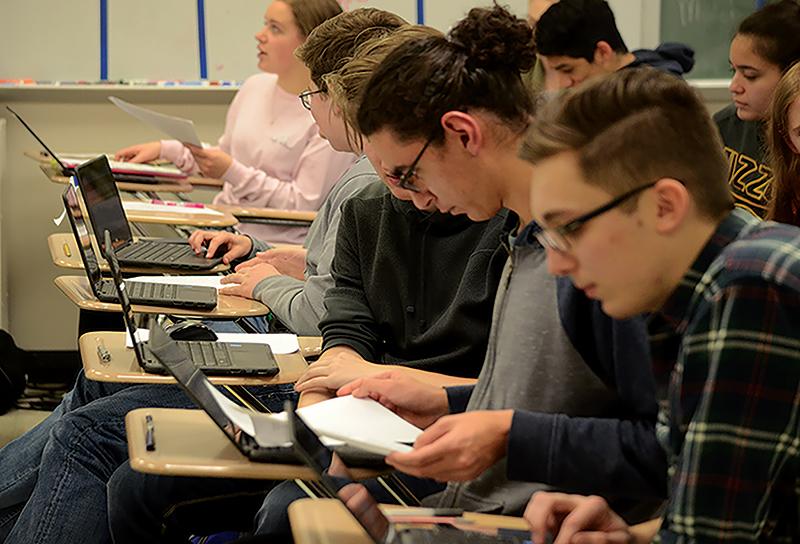 STUDYING UP: Students of third hour Advanced Placement (AP) US History and Language and Composition prepare for the AP test by taking notes regarding World War II March 12. Photo by George Frey

Advanced Placement (AP) registration for tests passed March 8 at RBHS. For the 2019-20 school year, however, College Board pushed the registration deadline forward to Nov. 15. While no payment is due until June of 2020, if students sign up or cancel after this deadline, additional fees may apply, according to AP Central.

Specifically, canceled or unused tests, while subtracting the original exam fee of $94, incur a fee of $40 per exam. Additionally, exams ordered past Nov. 15 but before March 13 requi

The College Board explained the change as beneficial for two main reasons: efficiency and performance. The new system would “eliminate the need for preadministration sessions,” the College Board said. RBHS Head of Counseling Betsy Jones confirms this as registration would finish earlier rather than be spread across the school year.

“So the changes will make test administration easier because by doing it in the fall we won’t have the student packs [or the small booklet which contains one’s test number and some additional information],” Jones said, “[and] we wouldn’t have the preadministration sessions.”

Additionally, data from the 2017-18 school year across 40,000 students suggests the students who signed up earlier found greater success.

“We saw an increase in scores of 3 or higher across multiple groups,” the College Board said on the AP Central website. “Moving the time of registration made a difference across the board, but it had the strongest effect for students who are traditionally underrepresented in AP.”

Sophomore Kellen Sapp said while the change may help administration, he doesn’t see the correlation to student performance. In fact, he believes the new system will only introduce fees.

“I think it’s smart by them in a money making standpoint. I think they will make lots more money because people might be hesitant to sign up during that period but end up taking the test anyway and paying [extra] money,” Sapp said. “So it’s smart from a business standpoint, but I don’t think it would help students.”

Jones said currently few students cancel out of AP tests. She estimates “less than five percent, for sure, probably more like two percent.”

With the new system, however, she foresees more students backing out whether it be seniors who realize the AP credit won’t benefit them for colleges or student burnout.

“I think kids will be gung-ho at the beginning of the year,” Jones said. “They will sign up and then realize that they are not feeling like they should take the test.”