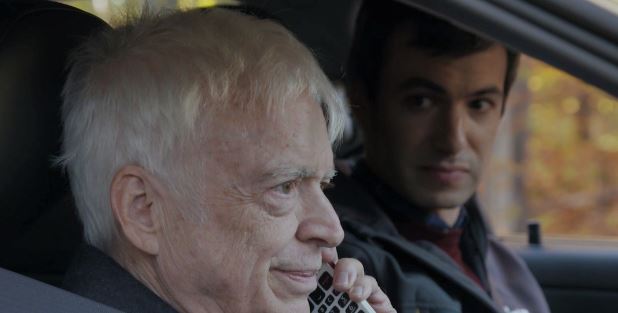 Nathan Fielder helps Bill Gates impersonator William Heath find his long lost love in the short documentary-style film ‘Finding Frances.’ The film is an extension of Fielder’s Comedy Central television series, ‘Nathan For You,’ where Fielder goes to businesses and people in need of help and gives them “out of the box” solutions. Fielder uses his usual comedic strengths throughout ‘Finding Frances,’ but a whole new element is added with the addition of William Heath, who is so unpredictable that at some points Fielder is taken aback.

Any compliments I give to ‘Finding Frances’ could be applied to the show ‘Nathan For You.’ As mentioned before, Fielder’s deadpan delivery completely sells most of the jokes that he dishes out on business owners and the public alike. The plans Fielder constructs are smart on surface level but nonsensical in nature. The fine line that Fielder travels is one that is hilarious to watch and mesmerizing to see actually payoff in the film. At one point in the movie, Fielder needs access to a school’s 1967 yearbook. In order to do this, he acts like he is producing the film “Mud 2” and needs the yearbook because the film is a period piece. Ideas like this should not work in a real world setting, but Fielder pulls it off through his delivery and convoluted plans.

The largest distinction from ‘Finding Frances’ and an episode of ‘Nathan For You’ is the addition of William Heath. Fielder usually creates the convoluted plans that he executes, so he is always in control. ‘Finding Frances’ presents Fielder a new challenge, someone he can’t control. Heath is an elderly man who doesn’t allude to all the secrets of his past. This leaves Fielder to not only put the pieces of Heath’s history together, but to also keep Heath under control and not say anything wrong once he does confront Frances.

You are in the position of Fielder throughout the film, finding new bits and pieces of Heath’s life as you draw nearer and nearer to finding the truth. It is almost enthralling in a way when Fielder and Heath actually find Frances. At the beginning of the film, it almost seemed impossible.

‘Finding Frances’ is not entirely a documentary. Fielder is playing a characterized version of himself many times throughout the film. The motivation behind some of the people participating in the film seems ungenuine at times. Heath went to Hollywood to be an actor, so maybe he was only trying to find Frances in order to be in another episode of ‘Nathan for You.’ Despite these road bumps, there is still plenty of authenticity in the film. Heath never seems to ham up his life for the cameras, and Fielder breaks his own character when talking to Heath many times. I’m glad that True/False is willing to step out of its documentary box in order to accommodate films that somewhat don’t match that pedigree. Films such as ‘Finding Frances’ along with ‘American Animals’ from last year are some of my favorite films that I have seen at True/False, even if they use actors in addition to telling a real story.

‘Finding Fraces’ is the funniest film I have ever seen at True/False. It has a great blend of acting and authenticity that works to its favor.

I would recommend fans of ‘Nathan For You’ to definitely try to see the next screening at True/False. No photos or video were allowed at the screening, but there was an extra hour of footage and a Q&A with Fielder himself. It really felt like a special occasion. ‘Finding Frances’ is a masterwork at unraveling the intricacies of the world around us with nothing but a few genius concepts and a camera crew.

What did you think of ‘Finding Frances?’ Let us know in the comments below.

‘Knock Down the House’ connects everyday Americans with political process