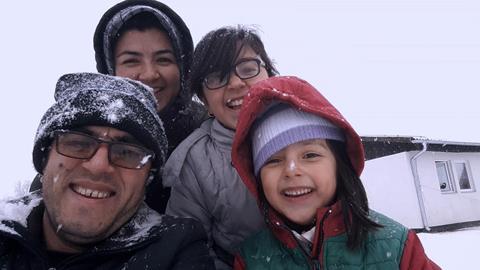 In Hassan Fazili’s magnificent ‘Midnight Traveler,’ the first-person perspective of an Afghan refugee is captured in a way that can’t be replicated by anyone else. After the Taliban demanded Fazili’s head for being outspoken against them, he and his family escaped Afghanistan to search for a safe haven. Using only three cell phones for cameras, Fazili manages to sufficiently document his trip from the beginning and also displays his skill as a filmmaker by capturing many still, artistic shots for the B-roll and transitions.

Much of the film’s praise likely deserves to go to its editor and producer Emelie Coleman Mahdavian. In the audience interview with Fazili (over Skype in Berlin, Germany) and Mahdavian (in-person) following the first True/False showing, it is stated that Fazili and his family recorded several hours worth of footage, well over the 87-minute end product. Despite so much video being cut, I never felt left out of anything during the screening.

Rather than being a simple collage of tapes that recap the journey from point A to point B, the video is put together in a way that is so captivating, it sometimes doesn’t feel like a documentary as much as it does a cinematic film “based off a true story.”

The accompanying suspenseful music composed by Gretchen Jude is so subtle and plays primarily during transitional shots, but adds so much to the cinematic element.

Many people hear of the hardships refugees face on a daily basis, but I have yet to feel real sympathy for them until now. This documentary connects its viewers with the Fazili family so that these hardships can be seen not just as statistics, but great tragedies. The hard moments that come from being refugees are effectively balanced with the sweet and sometimes funny moments that come from being a family, making the hard moments even harder to watch.

Fazili, his wife Fatima and their two young girls Nargis and Zahra are three years into the journey in the film. Right now, they’ve just made it to Berlin, and with the money donated to them through True/False, they plan to hire a trustworthy lawyer that can effectively represent their case so that they may be able to earn the right to legally refuge in Germany. To contribute to this donation, viewers can either place money in the bucket passed around during any of the showings of ‘Midnight Traveler,’ or text any amount to the True Life Fund number: (573)818-2151.

‘Midnight Traveler’ is a must-watch for True/False Film Fest goers and otherwise, not only because the experiences of the Fazili family are so important to know, but because they’re intriguing as well. It’s so remarkable and depressing at the same time to know that countless Afghan families just like Fazili’s go through the same things they do in the search for a better life, and often don’t even make it alive. I wish the best for Fazili, his wife Fatima and their two young daughters Nargis and Zahra, and I know that I’ll personally keep an eye out for any updates regarding their journey.

What did you think of ‘Midnight Traveler?’ Let us know in the comments below!

on the True/False Film Fest

‘One Child Nation’ shows dark perspective of one child policy