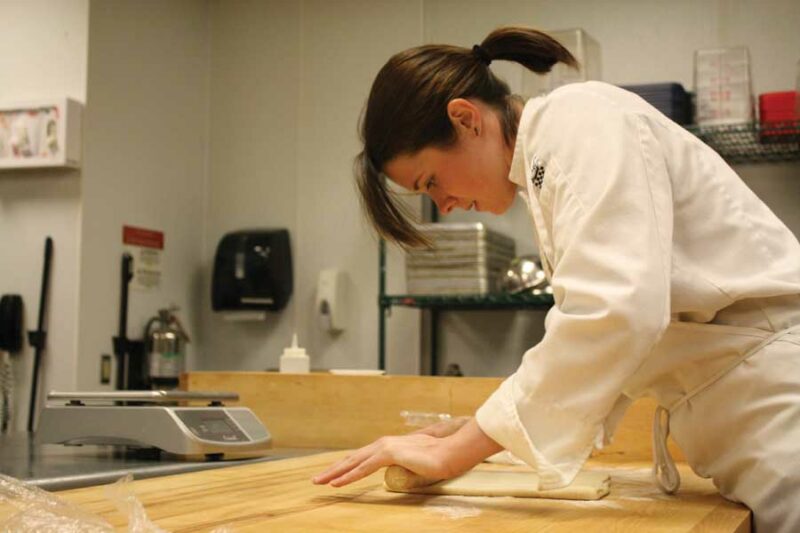 “When my name was called at the awards ceremony, I was in total shock, which quickly became happiness,” Riegel said. “I was so excited not only to win but to have the opportunity to compete at nationals and have validation for the work that I’ve put into this.”

To fundraise for the trip, the CACC will be hosting a BBQ Lunch and Dinner Thursday, April 25 from 11:00 a.m. to 1:00 p.m. and 4:30 p.m. to 7:00 p.m. The profit will help pay for registration, transportation and hotel fees, CACC culinary instructor Brook Harlan said.

For six dollars, individuals will receive a plate with pulled pork, baked beans, potato salad, coleslaw and a brownie. Orders of four or more meals can be placed for bulk-order pick-up. Parking is available in the Culinary Loading Zone or next to the Red Horticulture Building, according to the flyer. Bulk-orders will be ready for pick-up in Room 173 B, and should be placed before 10:30 a.m. April 25.

“We do a BBQ unit in the fall with the Culinary 2 class,” Harlan said, “but this will be all outside of class time with SkillsUSA, the Career and Technical Student Organization that we participate in.”

Harlan said Riegel and Williamson have been working on the fundraiser for about a week so far. The biggest items are organization of their time and working with other students to help orchestrate the event, Harlan said.

“For the BBQ sale, we’ve had to recruit volunteers from other culinary classes, compile recipes and scale them to the amount of people we will be serving,” Riegel said. “ We’ve had to make timelines and schedules for the prep we will have to do this week, because we’ll have to stay after school every day this week until the BBQ to make all of the food.”

Williamson said he has enjoyed cooking his whole life but never had an opportunity to learn how to be a good cook. This year, when he started taking a culinary class, he said he fell in love with cooking and the organization needed to have when preparing food.

I expect nationals to be a great experience overall,” Williamson said. “I think we are arriving a few days early, so we can explore the town and eat at some nice restaurants, which will definitely take our minds off nationals because both Rachel and I will be stressed. I am really excited to compete and see how I rank against some of the best high school chefs across the nation.

As for nationals, Riegel said the preparation has consisted of reviewing videos from past competitions and beginning to recipe test. Riegel will also meet with previous contestants from the CACC to talk and ask questions.

“This will be my first time at nationals, and I hope to give it my best effort and to practice to the point where I feel confident enough that I have a shot at winning,” Riegel said. “But even if I don’t win, I know that this will be an incredible learning experience. I’m expecting it to be exciting and terrifying at the same time, and I think the competition itself will be very chaotic and fast-paced, and I know that I will have to focus on what I am doing and tune out everything else around me.”

Are you attending the BBQ fundraiser? Let us know in the comments below!

Do you plan on attending the CACC BBQ fundraiser Thursday, the 25th

He was my friend

An Impactful Life Ep. 7 – Til death do us part

The BBQ dinner sounds like a great way to raise money for the trip! Congrats to the state winners!

This looks great! Congratulations to the two that won! I will definitely be in line for this.