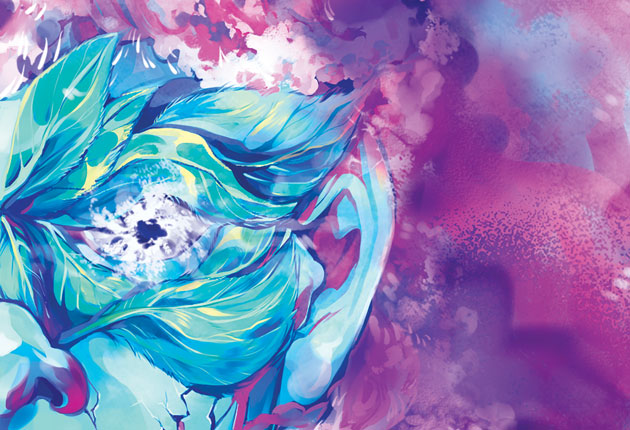 Space: the final frontier. Humans seek out new wonders and oddities deep into the vastness of the galaxy. They boldly send ships to places no one on Earth has ever seen to discover, to understand and to satisfy our continuous stream of existential wonderings of how humans came to exist and what their purpose is.

Two weeks ago, scientists in the Event Horizon Telescope group produced the first image of a black hole ever seen. It captures a bright, orange, spiraling wheel orbiting an ominous, black circle. The ring’s central point, called a singularity, contains infinitely dense mass and is brimming with light and matter the human eye cannot see, according to Vox.

Yet, on Earth, humans can learn a lot from a singularity to better understand a serious dilemma they face: reaching the human carrying capacity, the number of people that can survive on Earth without environmental degradation, reported Science.org.

Currently, the earth holds 7.3 billion people and grows by at least 74 million people a year, according to the U.S. Census Bureau. Though the exact number is uncertain, as humans do not reproduce consistently, consume resources or interact with the environment uniformly, at least 20 studies have predicted the earth can only support eight billion people, reported the Australian Academy of Science.

“Global warming [and] climate change should be taught in school because misinformation is harmful, especially when trying to solve the problem.”

Unlike a singularity within a black hole, carrying capacity curbs at a specific point, and the human population cannot continue to grow without reaping serious consequences on the environment. The earth, in addition, has limitations on its resources and functions that humans need to survive.

To learn about significant environmental concerns, such as humans reaching carrying capacity, junior Kellen Clowe has watched documentaries, read books and data packets from science agencies and looked up any inquiries he had on the internet since his freshman year. Clowe can see how the earth is suffering now because of an excess of non-environmentally conscious people. Instead of limiting the number of people, he said he believes the earth can survive with the increase as long as people care about the environment.

“Population growth is a problem but mostly just because humans are so wasteful of resources. The earth could sustain more people, but because many humans waste resources like food and water daily, there isn’t much left for more people, especially in areas where food and water is more scarce,” Clowe said. “Also, the more people there are, the more fossil fuels have to be burned to provide energy for them, at least until the whole world switches to cleaner energy sources.”

To Dr. Fengpeng Sun, who teaches global environmental change and climate change impact and policy response at the University of Missouri–Kansas City, the number of individuals it takes to reach the carrying capacity matters less than how people interact with the environment. Instead of estimating a specific number, Dr. Sun said, logically, the greater the increase of people on Earth, the more people there are to utilize resources and pollute the planet.

Heating Up
16 out of 17 of the warmest years ever recorded have occurred since 2001. Overall, the planet’s average surface temperature has risen about 1° Celsius since the late 19th century. [Source: Fauna & Flora International]

On average over the last 60 years, for every additional 25 ppm of carbon that goes into the atmosphere, the earth’s average global temperature rises 0.5° Fahrenheit or about 0.25° Celsius. [Source: Job One for Humanity]

Differing from Clowe, Dr. Sun said population growth correlates with environmental damage. He said the world population will continue to grow, and people will use more resources.

Dr. Sun highlights carbon dioxide emissions as a main contributing factor to global warming or the rising global temperatures. He said humans release carbon dioxide into the air through driving their cars and use too many nonrenewable energy sources, such as the burning of fossil fuels, too much.

Carbon dioxide emissions reached a record global high of 37.1 billion metric tons in 2018, according to a report from the Global Carbon Project. To better understand what that number means, Scientific American created a graphical display of a wildfire producing an equivalent amount of carbon dioxide. It would take a wildfire more than the size of Africa to reach the same emission of carbon dioxide that is produced yearly.

“I have faith that nature and humanity will find a way to solve this. This will take generations of humanity with the environment first mindsets.”

Additionally, the report estimated the total carbon dioxide concentrations in the atmosphere hit their highest level ever at 407 parts per million – about 45 percent higher than their pre-industrial levels. The increase of the gas correlates to the warming of the planet, as the earth’s surface temperature has risen 1.62 degrees fahrenheit since the late 19th century, according to NASA.

“Human beings [release] too much carbon dioxide and other greenhouse gases into the atmosphere, and then this warms up the surface atmosphere temperature, and [that] causes global warming,” Dr. Sun said. “You cannot continue warming, warming. This year one degrees, next year another one degrees. And [soon] it is going to be too hot. People are going to want to curb carbon dioxide emission into the atmosphere through some kind of policy agreement.”

Similar to carrying capacity, there is a limit to how much the earth can warm without causing serious damage, such as the melting of ice caps and glaciers, extreme droughts and flooding and rising sea levels. Increased temperatures also change weather and climate worldwide. Clowe attributes much of the earth’s change in climate to man-made causes and said he believes people do not realize the effect they have on the earth.

“The term ‘global warming’ is harmful, in my opinion. So many people disregard the science just because it snows outside or is cold, but no one says anything when it’s in the upper 70s in early April. Global warming [and] climate change should be taught in school because misinformation is harmful, especially when trying to solve the problem,” Clowe said. “Not many people know that 2014 [to] 2018 were the hottest four years in recorded history or understand that even when it is cold in one place it is hot somewhere else in the world. For instance, when the polar vortex hit this winter there was public mocking of global warming in the [United States], but not many people know that at the same time as the polar vortex hit North America, Australia was being hit by record-breaking temperatures over 120 degrees fahrenheit.”

“You cannot continue warming, warming. This year one degrees, next year another one degrees. And [soon] it is going to be too hot.”

“I am not certain it will be irreversible, but we are digging it deeper. The more we cause damage, the more effort it takes to repair,” Prenger said. “I have faith that nature and humanity will find a way to solve this. This will take generations of humanity with the environment-first mindsets.”

Being environmentally aware is a priority of keeping the earth healthy, Prenger said. Following that thought, Dr. Sun said a healthy Earth is a key factor in maintaining important resources. In fact, Dr. Sun cites the earth’s tipping point, or a time where natural systems are so overstressed that they cannot be recovered, as a consequence of damaging the earth. Dr. Sun said scientists do not know for sure when this event will take place or what will really happen after the earth reaches that point.

For Clowe, he can easily picture the earth reaching the tipping point in his lifetime or the next generation’s. He said he can imagine food and water prices rising and a migration of people from big cities on the coast that will “soon be underwater.” He could also picture a considerable change in weather, such as consistent droughts, extreme storms like hurricanes, which will increase in frequency because of warmer ocean temperatures and flooding. He does not, however, see the effects being permanent.

“Because global warming is such a slow but unbudging event, I don’t think the world will look very different at the point in time when it becomes too late or irreversible,” Clowe said. “That point in time will happen during my lifetime, but I think it will take a few more years for the effects of global warming to cause life on Earth to be drastically different.”

What should RBHS do to combat climate change? Let us know in the comments below.