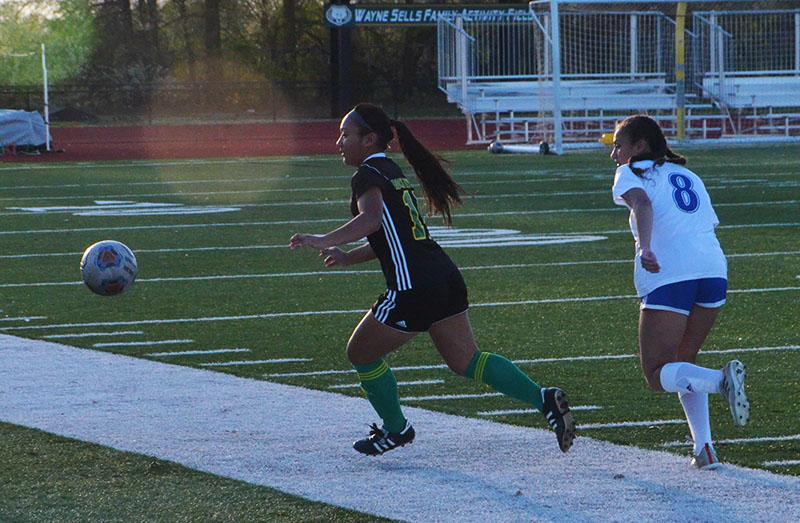 The Lady Bruins faced off against the Blue Devils of Quincy Senior High School (QSHS) on Monday. Head coach Scott Wittenborn was home ill during last night’s game. As the game went on, the team’s energy increased, as the end drew nearer.

Despite his absence, the team still communicated and strategized on a more personal level. Junior and center defender Memphis Cutchlow said her teammates were able to practice what they were always taught to be united as a team.

“I think this game was the first game in a while that we really played like a team,” Cutchlow said. “We played our hearts out yesterday. We were getting shots off. We were talking with each other, so we really were a cohesive group of people.”

Operating as a team can be a struggle especially when the head coach gives his duties to an assistant. Wittenborn, however, knew his assistant coach Topher Horstman would encourage his players to press on against the Blue Devils.

Regardless of the team’s loss against QSHS, players like senior defender Lily Abraham have high hopes for the future as the teams tries to qualify for the district tournament May 11. Abraham believes that though the team has improved since the beginning of the season, there are aspects of the game still needing adjustment.

“We definitely improved throughout the game with our intensity, especially with the last 20 minutes, we were a high pressed team,” Abraham said. “[I] just think we’re going to try and use that same intensity throughout the rest of our season. We are doing better with our communication, and our teamwork has really improved as a whole.”

As the season continues and the district tournament approaches, Cutchlow hopes the team will be able to press hard during games and communicate well.

“I think we still need to work on some of the smaller things that we have been working on in practice,” Cutchlow said. “Playing simple has been something our coaches have emphasized for the past several weeks. Talking even more, so we know who has a defender on them or who needs to mark another girl is vital.”

The little things: How design impacts our daily lives