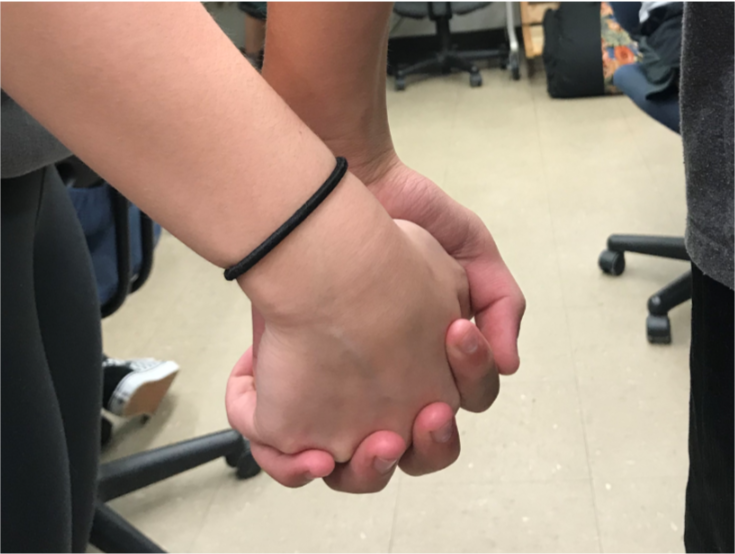 Couple holds hands while in class.

High school can be hard as any teenager can testify. This could be from being in different classes, changing friend groups and trying to find themselves. Dating does not make it any easier.

Times have changed from sharing shakes at the local diner. Now there are even different kinds of dating: talking, friends with benefits, open dating and regular dating. Freshman Alex Sanderson understands these different kinds of relationships from personal experiences.

“Open relationships are confusing and full of jealousy but could be fun for a while. Talking is my personal favorite because it’s on the level of relationship status without being fully committed,” Sanderson said. “You’re able to tell them stuff without having to tell them everything but are able to get to know them better. Friends with benefits would be stressful, it never ends up working out especially if one catches feelings.”

To some people, dating is practice for marriage. This “practice” could mean finding red flags in relationships and what works and what doesn’t work. But going through the transition of realizing what types of people that work best in relationships with them and differentiating the good and the bad is the hardest part about dating.

Psychologist Connie Brooks from the Thompson Center says dating can affect someone mentally, meaning it could be a good or bad affect. This process of going through the good and the bad means going through the heart breaks and drama.

“For breakups, depending on how the breakup occurs there is significant changes for a person. They might not only lose a person they were dating, their significant other but they could also be losing the person that was their best friend,” Dr. Brooks said. “They could also be losing people in their friend group and even part of their identity since they associated themselves with that person.”

“Social media and texting are definitely game changers and add a whole other level to dating and can actually hurt relationships in the long run.” Clayton said, “because… sometimes you get familiar to the person on the screen, and it’s like you don’t know the person behind it. I don’t have Snapchat or Instagram, so it can sometimes get hard to keep up to date on everything or communicate with people often.”

While social media can be harmful toward relationships, it can also be helpful in meeting new people. According to Commonsensemedia.org, Instagram and Snapchat are the most used teen apps which can be helpful in either representing who a person is or who they want to be seen as. They can aid people with those of similar interests meet or be able to grow closer. Junior Caleb Dunafon said social networking helps him and his friends grow closer and be able to make plans to hang out.

“We can send locations [on snapchat] and talk about plans quickly so that we can hang out more often,” Dunafon said.

While some may see dating as trial and error for finding what they want in a relationship, others see it as a sort of seek and find. This means that they are in a search of a person that is actually compatible with them. After dating her boyfriend for more than a year, junior Elayna Mottaz thinks relationships spark and become much easier once a person is able to find someone they truly care about.

“It’s a wild roller coaster. There are pros and cons in dating in high school,” Mottaz said. “But when you find the one you really love, it makes life a whole lot easier.”

Dating can have gains and losses, gaining that relationship and the breakups or fights which can affect people mentally. Dr. Brooks believes dating affects teenager mentally and it can influence different people in different relationships.

“Dating affects teenagers in all sorts of ways. For most teenagers it’s going to be an extra stressor like another person to think about: how often to hang out with them, how much do they talk or what they think about one another,” Dr. Brooks said. “For others it could be like a support person, someone to talk to. Some people handle it really well with lots of communication and others do not handle it, as well.”