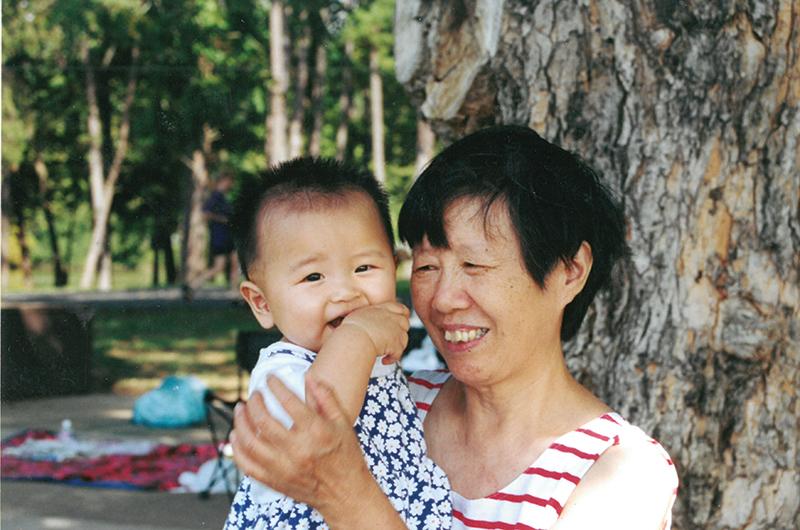 You knew me before I knew myself. Blazing a path for you and your family, you are the example I strive to become. Even when you’re not with me, I will remember your words forever.

My parents never read me many children’s books, but I had something better; my grandparents would tell me stories of how cute I was as a baby. From how I would yank my neighbors’ flowers off their lawn and run off with a mischievous grin to how on my first airplane flight, I stumbled up and down the aisle calling everyone Lao Lao, the Chinese word for grandma.

Apparently quite a few of the passengers were offended.

I use to always ask my grandparents to rack their brains one more time in scavenge for one more anecdote they hadn’t told me yet. Most times, they would deliver. I’d learn about the time I tried incessantly to name my little brother Abby or about the first time I told my grandfather I loved him.

While I can’t actually remember any of these specific moments, I smile back to the time my grandparents told me about them at the dinner table with my grandfather’s famous Zha Jiang Mian, somewhat like a spaghetti, but only ten times better.

Although it probably wasn’t true that I was the cutest baby to ever crawl the planet, the stories of my childhood clue me in to how significant my grandparents were to me through my life.

In Tenn. 17 years  ago, my grandma said she helped out with my birth. She remembers when I came out; she exclaimed, “是个小许东！” or how I looked just like a little version of my father.

“I needed to look toward my role models, those who know better than me.”

I still remember the glow on her face every time she repeated that story.

Because both my parents were working, my grandmother helped care for me the first dozen or so months of my life, witnessing my first words and steps. Always a worrier, my grandmother would wake in the middle of the night to check up on me. Even when my parents were home, my grandma would secretly tiptoe down the stairs and peer into the crib as to verify my safety.

Since birth, I’ve transformed from a crying baby, to a sassy toddler, to a withdrawn child, to an awkward teenager to god knows what today. As a junior in high school, I don’t think I’ve ever been more unsure to where my life is headed. Should I pursue math? Science? Writing? Speech? Art?

More than that, who am I as a person? Am I really the extrovert I tell myself I am despite trying so hard to fake it and change myself as a middle-schooler?

Only recently have I realized that these questions, while about me, cannot be answered all by myself. Instead, I needed to look toward my role models, those who know better than me.

Although my grandparents lived in a vastly different place, time and circumstance, the narratives of their life have taught me important virtues and enlightened me to who I want to be.

My grandparents grew up in farmer families in an era when China struggled financially. On my mother’s side, both my grandparents had seven siblings; however, only half survived to adulthood. My grandfather had six brothers and one sister. He said one of his saddest times in his life was when his sister died just shy of 10. His father died early as well, so my grandfather’s mother and him, the eldest in his late teens, had to fill the hole left behind.

At 80 years old, my grandfather still embodies self-sufficiency and responsibility. After receiving green cards to live with us, my grandparents insisted they reside in and pay for their own place because they didn’t want to impose. Speaking extremely minimal English, my grandparents participated and conversed with the other seniors in the senior living apartments by playing Bingo, writing birthday cards or just smiling. Today, my grandfather still prepares me home cooked meals, ready as soon as I arrive home, because he knows how much I hate the cafeteria food.

By listening to and observing my grandfather, I reflect on my own situation. I am also the oldest of my family, but I only pout at the chores expected of me that my brother gets out of.

I complain at trivial things because they’re “unfair.”

While I may not know who exactly I am, I do know I want to be more like my grandfather, someone who my grandmother could rely on when she was sick, someone who never gave excuses to shag off drudgery, someone who always did the most he possibly could.

Although I’ve never had the need to grow up fast, which I’m really thankful for, my grandfather’s stories motivate me to do better, something he’s proved to me that I can do.

Both my grandparents were also relentless in their studies.

In their pursuit of education, they had to walk 7 to 8 miles round trip everyday, and my grandpa said because he couldn’t afford a backpack, he dragged a plastic sack to school. Most impressive, though, was my grandmother, who was one of two girls in her village to enroll in high school. And not only did she go, she excelled.

“My grandmother taught me there is no such thing as an easy life, hence there is no excuse not to try one’s hardest.”

As a meticulous and disciplined student, my grandmother consistently scored the top in her class. In fact, my grandfather use to joke that every guy in college had a crush on her and that he was just her fifth admirer. My grandpa also said he once went to a convention oversees where, when seeing he represented China, was asked if he knew Huang, to which he proudly announced that she was his wife.

Not only did my grandmother value her education and career, but she also hoped her daughters would follow her footsteps. When I visited China earlier this year, I got to see my mother’s old home. It was a cramped, government assigned home with narrow and uneven stone hallways separating the houses and cats scampering along creaky window sills. My mother’s old neighbor told me about how hardworking my mother was, eventually landing her at a top university in China and then immigrating to America. My mother just laughed the subject off; however, she later told me that it was my grandma forcing her to study in hopes she would always stay ahead.

My grandmother taught me there is no such thing as an easy life, hence there is no excuse not to try one’s hardest.

I’ve always resented hearing my mother demand me to study harder; however, my entire life is the result of my grandparents being trailblazers and my parents’ hard work. I don’t want to take for granted what my family fought for. And so even when the world is unfair, that I’m an Asian American who may have a harder time earning a spot, I also recognize the privilege I have to be from a family of honest workers.

” I don’t want to take for granted what my family fought for. ”

My family heritage motivates me hold myself to high standards, and so while I may not know who exactly I am, I know what it is I want to strive for.

There were so many other anecdotes my grandparents told me that I will remember for the rest of my life. This has become clear to me now, as earlier this year, I lost my grandmother. Losing her felt like losing a large part of myself.

My grandma always reminded me to “抓紧,” which, when directly translated, means to firmly grasp. To me, this always meant focus on your studies, stop wasting time and work harder.  I remember reacting to this phrase with annoyance while reassuring her halfheartedly that I would, while secretly continuing my YouTube video, game or whatever distraction. Sometimes, to express my displeasure I would ignore her on purpose.

Although the stories of the past may feel disconnected from our own, by listening to the generations before, we can gain wisdom and perspective. And that is priceless. The persistence shown throughout my grandparents’ lives is something I find so much pride in, and their resilience reassures me that while I may be confused to where my life is headed now, like my family, I will find my way.