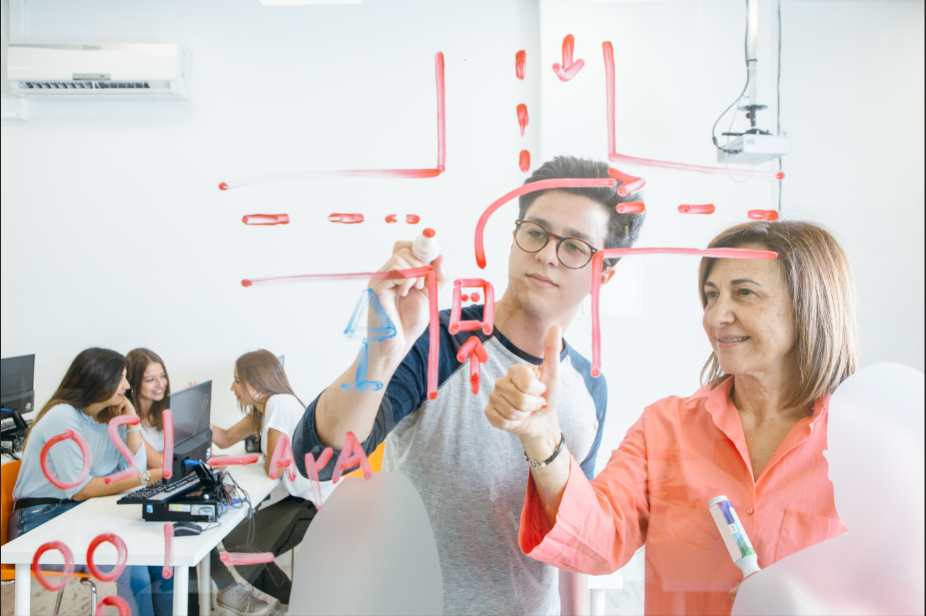 Many RBHS students are not surprised that the desire to becoming a teacher is low, and the students agree they wouldn’t want to take the job either.

“Kids can be mean,” freshman Aisha Ibitoye said. “You could do one thing wrong, and you will forever be judged by your one mistake. Also, you can’t be your true self around students because you have to remain professional all of the time.”

Freshman Amanda Riegel argues some of the similar things. She adds that teachers hold a bad stigma with them. In media they’re portrayed as a villain such as Dolores Umbridge in Harry Potter or Ms.Trunchbull in Matilda. This adds lots of pressure on them. As well as the children they’re teaching. If they make one mistake their career could be put in danger. Such as freaking out on student or saying something that could be seen as rude. She thinks that lots of teachers make national headlines because of the inappropriate actions they have committed. While inappropriate actions are found in all jobs, Riegel thinks most other jobs don’t have as much pressure as a teacher. Kids have the ability to send a teachers job down the drain.

This is a common problem students have, which factors into student’s decision to become a teachers.

Even teachers are noticing that students aren’t wanting to become teachers such as French teacher Kristin Reed. From her experiences, she thinks that most students don’t wish to become a teacher because of things such as low pay and little support from the administrators and the world as a whole not being supportive. Yet these things don’t stop her from loving teaching.

Reed had a rich background in teaching. Her grandmother taught at a small schoolhouse in South Dakota and her father taught at the University of Missouri-Columbia. It lead Reed to believe there was no possibility of becoming a teacher. Fate dealt her hand, and she ended up with a job as a substitute teacher. This job lasted for a year, and to her surprise she loved it. Many people praised the work she did as a sub. Then Reed got persuaded into going full time and becoming a teacher. She’s been teaching for 17 years.

Reed’s main inspiration to be a teacher is,

“Initially it was because I had some bad experiences in a classroom, and I vowed that it did not have to be that bad.  In addition to loving being a sub,”

The biggest roadblocks Reed faced was herself. Everyone else remained very supportive of this idea, but Reed was skeptical. Deep down she knew she was a determined person and wasn’t scared about the five year turnovers that some teachers warned her about. After that her career set off. Reed loves to teach and continues to teach rock bridge students French. She loves how she can create her own lessons, and make it fun for her students.  Reed does face some difficulties when teaching, but the way she sees it, the positives outweigh the negatives. In the end Reed isn’t too hopeful for next generation of teachers.

“By asking young adults to change their minds about doing what they want to do as a career and becoming educators instead, would yes better society and the education system. But realistically no one would do that,” Freshman Lydia Turner said “The amount of people who would step up to the plate of changing their hopes and dreams for that would be so small that it wouldn’t have the impact that the education system is looking for.”

She furthers her argument by saying that not even changing pay for teachers will not get students to become teachers. She thinks there are so many other jobs that inspire students, and if students truly want to become teachers they will.The top career fields include the medical field, the technology sector, and financial services according to money crashers. While the education field comes in fourth.

Will it stay that way? Or will it continue to decline on top fields.

Turner thinks the disinterest in becoming a teacher is to blame on the teachers. This is because it’s their job to help the new generation of students to start becoming teachers. She also argues that there could be a slight change, but not enough to fix the issue. Turner then thinks there’s a change needed for more students to become teacher. But where the change needs to be, she has no clue.

“I do not think that students not wanting to become teachers is a big deal, but that’s looking at it from a view of how when kids get older.” Turner said  “They start to figure out what they want to do. That comes with the knowledge of so many jobs. When we were younger we were with our teachers all the time and we looked up to them. Not saying we don’t anymore but there are so many other opportunities in life. Teaching isn’t for everyone. But looking at it from the education system that decline in students not wanting to become teachers is very detrimental to them. That is making less educators and will affect future students therefore the future in general”

The amount of freshman college students who plan on majoring in Education is at an all time low of 4.6%. This number has been decreasing since the 1970’s. Where it was 10%.  If students don’t start to care about teaching, there may be no one to teach the oncoming students.

The inevitability of high school stress

I am a freshman at Rock Bridge High School. I participate in community theater and I watch too many old movies. I also love to write and video.