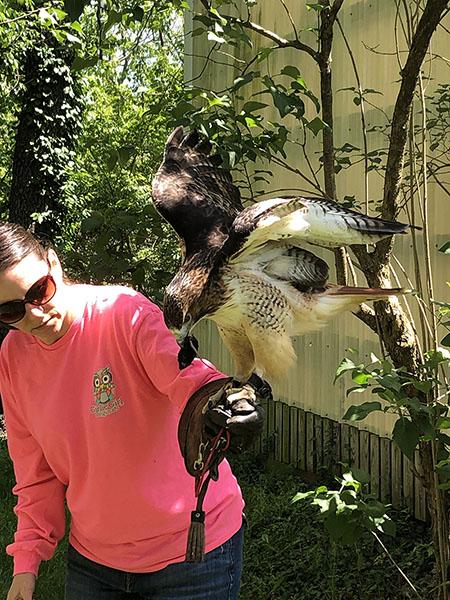 In a city like Columbia, it isn’t uncommon to see a red-tailed hawk or turkey vulture perched on a branch, on a telephone pole or circling the sky above. After gazing up to see what is overhead, these birds leave the thoughts while driving or walking to the next destination.

But what happens afterwards? These birds have lives, constantly moving around and trying to find their next meal. Grimm, a turkey vulture, is an example of such an animal.

While picking at a carcass in the middle of a street, Grimm found himself on the receiving end of an oncoming car. Usually an animal being hit by a car means certain death, but thankfully the University of Missouri here in Columbia has a place created specifically for birds of prey in situations like the one Grimm found himself in.

Behind the University of Missouri Veterinary Health Center at 1600 East Rollins, Columbia, MO 65211 lies a road that follows a steep hill, incredibly easy to miss since it seems like nothing is at the end. However, follow this street down and a gravel road leads to the Raptor Rehabilitation Project (RRP) building.

Raptors, or birds of prey, come for rehabilitation here if located in Columbia. If a bird is found hurt or down on the side of the road or anywhere, people can call the veterinary school and state the location, and a member will come and retrieve the bird for proper care. Lizette Somer, a member of the project, said the program takes in any kind of raptor and has just recently expanded their license to also include any waterfowl, such as swans.

“Occasionally, song birds will come in, as well,” Somer said. “We’ve even had a pelican come in as a rehab bird.”

Presently, the rehabilitation program is a home to seven education birds: Minnie Pearl, a Great Horned Owl, Eb, a Barred owl, Baylor, a red morph Eastern Screech owl, JD, a Harlan’s hawk, Heph, an American Kestrel, Jacob, a Red Tailed hawk, and Grimm, a Turkey vulture. The program currently has a bald eagle, as well, but plans on sending it to a zoo in Springfield to be an education bird.

Sometimes, birds like those listed above stay with the RRP and are used as an education bird of their own; however, the RRP is a smaller facility and isn’t able to house as many education birds. These birds are brought to presentations across Missouri, such as Agriculture Day here at RBHS.

Some of these birds, such as Athena, the baby great horned owl currently in the process of fostering by Minnie Pearl, have only been there a short while, but others, like JD, who has been with the program for 31 years, have been there more than half their lives.

Somer has been working with the birds for the past four years, a decent amount of time, until it is taken into consideration that there have been some working more than 15 years. She is still new compared to others but takes over many important jobs, such as resident feeding and rehabbing, training students, leading presentations, and picking up injured raptors.

Somer said the number of injured raptors that comes through the program fluctuates from year to year. For example, in 2018 there were only 161 injured birds rescued compared to the 268 rescued in 2017. The birds find themselves rescued by members of the city, Missouri Department of Conservation members  or RRP volunteers.

Once rescued, the birds undergo many procedures for rehabilitation. Depending on the type of injury the bird had, Somer and the rest of the volunteers create different evaluations.

“If the injuries are too severe for recovery, then the bird is humanely euthanized,” Somer said. “If the injury is treatable, then a treatment plan is made. A general physical examination is performed by the vet student on call.”

“This examination includes checking mental activity of the bird, eye movement, wing injuries for fractures or breaks, inside the mouth, keel score (which is the size of the breastbone of the bird), the weight, any other fractures or breaks, and feet/talon condition,” said Somer. “If eye injuries are suspected, a bird will have an ophthalmologist consult. Owls can be released with at least 50 percent vision, and eagles need 90 percent vision to be releasable.”

While the bird receives treatment, it will stay at the Vet Hospital on campus. Once the bird has recovered enough to be moved, Somer or another member of the RRP will transfer the bird to the rehabilitation center down the street. The bird will build up enough strength there in their multiple flight cages for it to exercise in. Once the bird has returned to its normal state, the bird will go through live testing to prove that it is capable of hunting in the wild.

“If all goes well, the bird will be released back in the county that it was found,” Somer said.

If the bird does not pass this test but has a good quality of life, then the manager of the RRP will try to find a facility to house the bird in the US, such as a zoo or an education center.

These education centers become some of the first places that children and students hear about the program, which pushes them to their first steps to volunteer. Somer believes students should volunteer if they have free time and want to put forth the effort, but are required to be 18 years old. Somer says she hasn’t seen too many high school students being involved due to the age restriction, which limits the number of students. However, she has said many volunteers come at a later age because of interest from attending a presentation at a younger age while in school.

Whitney Jones is a former student at Mizzou in a situation similar to the one Somer described. Jones graduated from Mizzou pursuing a job as a Veterinary Technician and met with an advisor with a hope to interact with wildlife more.

“My advisor suggested getting involved with the RRP as a way to create a bridge between multiple workfields I am interested in,” Jones said. “It helped me get a better understanding of the animals and opened up more opportunities for jobs in the future.”

Students under 18 that want to get involved to help figure out their future just like Jones, have no fear. According to Somer, multiple vet school-sponsored events run throughout the year, available to all ages.

Enjoy some interesting facts about raptors!

Are you going to volunteer for the RRP? Let us know in the comments below!

Students get dirty during the Rock Bridge mud volleyball event

Liam Peck is a senior at RBHS, involved in Track and Field, Emerald Regiment, and National Honors Society. He plays the baritone and trombone, and does high jump.