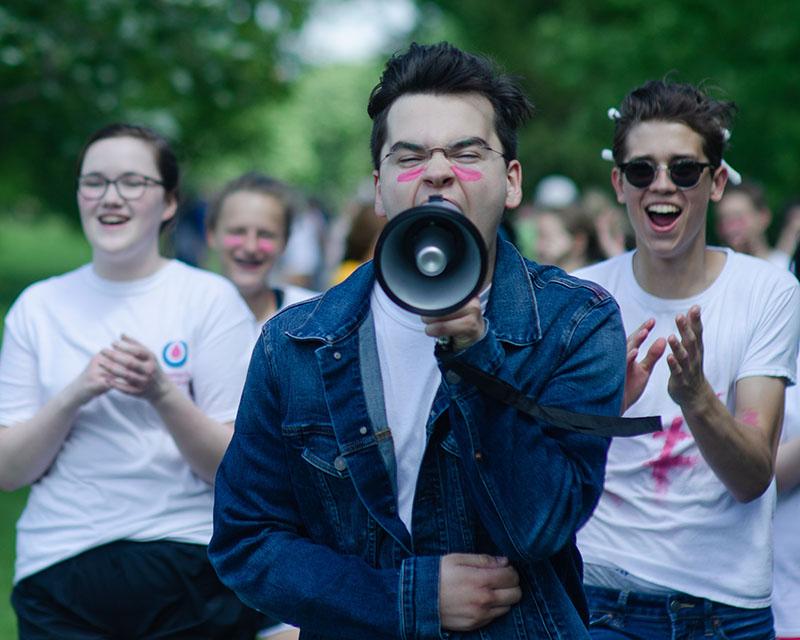 Sophomore George Matthes chants and leads on the march. “MHDay is important because it helps raise awareness about issues most people take for granted, and gives a platform through which to help these girls across the world who don’t have access to essential health products like we do, either being kept from them by inaccessibility or cultural stigmas.”

RBHS Sophomores Shruti Gautam and Olivia DeClue organize the first annual Menstrual Hygiene Day walk in Columbia on May 19th, . It was at Cosmo Park in northern Columbia. Both leaders agreed that the walk was successful, raising more than $900 for BeArtsy’s Rato Baltin Project that benefits underprivileged women in Nepal.

When attendees, approximately 50 with 25 from RBHS, went to Harris Shelter, where the walk began, student volunteers greeted, took donations and sold refreshments.

Set to start at 2:30 p.m. Sunday, at about 2:45 the walk began. Those who chose to run the three mile course started first, while the walkers began shortly after, finishing the around 4 p.m.

“I thought the walk was really fun,” sophomore Maggie Wolf said. “I am definitely going to come again.”

A few months ago, after stumbling upon an article about the mistreatment of menstruating girls in Nepal, DeClue and Gautam set out to make change. The girls then discovered the Rato Baltin Project, which provides menstrual cups to woman who are forced into chhaupadi, a tradition that forces women to live in small dirty huts while on their period.

These huts are hot, dirty and put these girls at risk of suffocation and rape. This tradition originates from the idea that menstruation causes women to be temporarily impure, and that a god created menstruation as a means to distribute a curse to men, according to a February article from the New York Times.

The attention to this issue has been distributed to businesses in Columbia, as well. Kona Ice provided the participants with one of their trucks; 20 percent of the money attendees spent at the truck was given back to the Rato Balin Project, further increasing the money given to the cause.

“I thought Kona Ice was a nice touch,” freshman Taylor Geneux,  said. “It made all of us happy to see that truck after walking for two hours.”

Sophomore organizers sit on the curb
Sophomore Parker Boone fashions his hand-made period product crown in support of the Menstrual Health walk. The walk was held at Cosmo park Sunday, May 19.
Sophomore and organizer Olivia Declue sits on the curb reflecting on the walk. “MH day is important because it helps educate women and support them through their menstrual journey. also because it’s nice to be nice. And its important for us Americans to remain humble knowing pads n that good good are practically rights for us.” Declue said.
Sophomore Parker Boone piggy-backs on Sophomore Mason Crane. "The walk was extremely important because of the organization it was raising awareness and money for. I didn’t even know that some schools didn’t supply tampons which seems outrageous to me. The work that Shruti and her friends are doing is extremely important in raising awareness for the problems that women face on a daily basis" Boone said Sunday, May 19.
Sophomore George Matthes chants and leads on the march. “MHDay is important because it helps raise awareness about issues most people take for granted, and gives a platform through which to help these girls across the world who don’t have access to essential health products like we do, either being kept from them by inaccessibility or cultural stigmas.”
Sophomore Adrienne Smith,
Sophomore George Matthes speaks to the crowd in preparation for the march. “The turn out was really good. Definitely better than we expected. We thought that a majority of the people signed up wouldn’t attend due to weather, but fortunately we overestimated how many people that would be and managed to get together about eighty people for the event.”
previous post