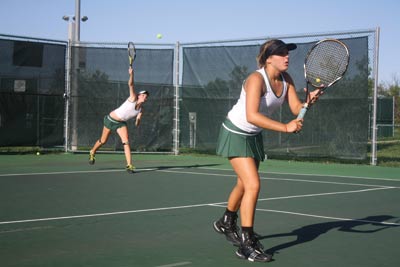 Serving it up: Junior Maddy Kayser (background) along with sophomore Sophi Farid (foreground) play in a doubles match on Sept. 7. The girls’ tennis team went through competitive summer tryouts in order to determine the varsity team for the 2011 season.

After months of five-hour-a-day practices in the summer sun, the girls’ tennis team feels prepared to crush their competition. Following last year’s win at state and a long tradition of district titles, they know the pressure is on.

“Last season we won state against Ladue. It was huge,” senior Savannah Everett said. “I think that with anything less than winning state we would be disappointed just because we know how winning feels from last year. We are willing to work that much harder for it again.”

In order to achieve this goal, sophomore Sophi Farid said she and her teammates went through a grueling summer training regimen, attempting to gain both experience and an atmosphere of team bonding.

“During the weeks this summer we went to hours of clinics every day, if not more,” Farid said. “Over the weekends we would go to tournaments down in Tulsa and up in Iowa. We spent a lot of time together.”

This summer dedication, Farid said, is key in developing a team attitude, something which she believes was necessary once the competitive tryouts began.

For the first two weeks of practice, it was difficult for her and her teammates to stay friendly as they played one-on-one matches to determine the makeup of the varsity team.

“Tryouts were very intense,” Farid said. “I have never been so stressed in my life. Tryouts are when the whole team thing rips apart, and it’s just individual games and everybody’s fighting for what they worked for.”

Everett echoed Farid’s discontent with the lack of a team atmosphere during tryouts, believing that the extreme competition within the team erupted because of the similar skill levels of the team members.

“Tryouts lasted a lot longer than normal because when we played each other we were all really close in ability,” Everett said. “Last year we knew the order, so people weren’t as upset but this year it was different because we were so even. We all could have been number one.”

Though tryouts were intense, Coach Ben Loeb believes the competitiveness highlights the strengths of his team.

“The closeness in ability level creates a team with good depth. Good depth has been a trademark of our team for the past many years,” Loeb said, “It makes a big difference and we’ll need it at times during the season.”

Similarly, Everett said the team’s biggest strength is the team members’ similar skill level, which forces each person to improve through competition.

“Tennis is different because it is individual in some aspects,” Everett said. “Until season starts, it is who can beat who and everything matters. You want to be as high as you can but ultimately it’s all about the team points once you’re in season. The team is what really matters.”

All in all, both Farid and Everett believe they pushed themselves to their limit this summer, giving them the confidence to move through their season as a unified team.

“We were sisters last year and I want us to come together and be like sisters again,” Farid said. “As a team, I want us to get just as far as we did last year. Winning state is always the goal.”

Emily Marie Wright can be summed up in one shining hyphenation: well-rounded. She flawlessly epitomizes diversity in activity and achievement. Not only does Emily participate in RBHS’s cross country and track teams, but she also manages to keep a beautifully maintained fountain of golden tresses which can often be found cascading around her lovely face or pinned behind her ears to fully expose a set of staggeringly exquisite, glittering emerald eyes. Emily’s wits are not a force to be messed with. She exceeds as editor of the Sports section and is enrolled in a multitude of rigorous classes, all of which she manages with grace and knowledgeable accuracy. Emily lives in Columbia, MO with her parents and younger sister.