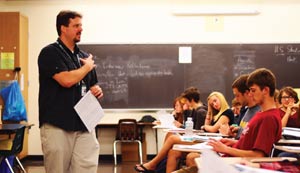 A group of teachers is looking to eliminate the honors level class from the U.S. English and history course offerings at the junior level.

Instead, juniors would have two options: a team-taught Advanced Placement English Language class and A.P. U.S. History class or an on-level U.S. Studies class, team-taught by English and history teachers.

Teachers have scheduled a meeting with Mark Maus, principal, for Wednesday Nov. 2 to present their proposal.

“We redesigned the program because we wanted to push honors students to not only have good behavior,” social studies teacher Austin Reed said, “but to have a curiosity about the topics and a real life application for their information.”

Reed, who has taught juniors history for seven years, said the curriculums of honors and on-level U.S. studies are so similar there is no need to separate them.

For those wanting an honors designation on their transcripts, Reed said students could contract for additional assignments.

“Kids were picking to be in regular because they wanted to be with their friends and thought that they weren’t smart enough,” Reed said. “Kids in honors were picking it so they wouldn’t have to deal with ‘riffraff’ and behavioral issues.”

In on-level classes, the percentage of students with behavioral issues is higher, Reed said, and when the classes are mixed, the percentage goes down. He said having only two course options would provide for a more successful learning environment.

Another advocate for the proposed course change is U.S. studies teacher Gregory Irwin, who has taught both on-level and honors U.S. Studies classes. He said he bases his reasoning on class-division research he and others have done which shows an association between socioeconomic factors and the class levels students choose.

Though the Missouri Department of Education is in favor of waiving its right to the law, things are far from concrete. However, the department does have its own school improvement and accountability program, the Missouri School Improvement Program Five.

Depending on legislative work within the federal government, the MSIP Five in addition to the Missouri Assessment Program may become the educational standard for the state.

“At first glance it appears the waiver could support our state’s high standards and accountability principles,” Nicastro said in the news release.  “We are already establishing a framework to push toward excellence, reduce gaps in academic achievement and ensure all students graduate from high school ready for college and careers.  Barring any surprises in the fine print, it may be a good fit.”

RBHS social studies teacher Matt Dingler said the change from NCLB to a state-sponsored standard is positive because of the restrictions the law imposes on schools and teachers. For some schools, teaching to the test has become a normality to meet the sometimes unrealistic requirements set by the law.

“I feel that [NCLB] really traps schools into it by making them pursue the wrong goals. And if they don’t meet these goals which are often unattainable, they’re penalized,” Dingler said. “The intentions were good, but I think, as is the case a lot of times, you have people making these laws that know very little about education. They’re politicians, not educators.”