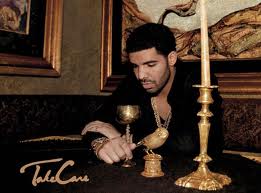 From the beginning to end of his album he comes out swinging with deep yet cocky words of the talent that has brought him from dreams to distinction.

The first song “Over My Dead Body,” he approaches a slow, choral beat with an energetic rap explaining what it’s like to be young and in love. While setting the mood of his album as being soft but continuing with the trend of changing the pace, his next song shares his love for alcohol and his spiteful exes. Making the story of how he made her who she is and that she’ll never find anyone better than him known, he harmoniously says to cope with the pain she can take a “Shot For Me.”

The next few songs of the album Drake begins to pour his heart out one glass at a time. The call that no one ever wants to make is the base of his song, “Marvin’s Room.” The title was named after the studio that Marvin Gaye recorded in; he opens up and somberly sings of a time where he drunk dials his ex-girlfriend repeatedly saying, “I’m just saying you could do better.” These lyrics apply to anyone who hasn’t had the courage to tell that someone how you feel and how the honesty that comes with drinking can bring out the angry and emotional side of anyone. Directly after, the Canadian based group OVOXO in which the OVO stands for Drake (October’s Very Own) as he was born Oct. 24, and his partner The Weeknd in which the X stands for kiss and O, hug; collaborate on the fifth track of the album, “Crew Love.”

On the track “We’ll Be Fine,” Drake produces one of his more up-tempo songs featuring Kendrick Lamar. With an appropriate rise and fall of sound, the lyrics seem to fall in place perfectly. Nicki Minaj features in his next song, “Make Me Proud.” Fast paced and melodic, Drake describes a girl that is making herself seem as if she is perfect, while at the same time the tune and words of the chorus “I’m so proud of you” sets a scene where she’s making him look better than if he was with anyone else.

“Lord Knows” featuring Rick Ross, shows Drake’s spiritual side with a gospel vocalizing in the foreground and throughout the song. Although it sounds like it would have more lyrics to do with God, it actually shows how much he isn’t scared to be at the top and that the lord knows he was born for this.

Both artists possess great lyrical lines and quickly changed modulation. Slow resonating beats and bass are what makes the next song “Cameras (Good Ones Go),” a perfect song to relax to and listen attentively to his words about a girl that only looks like a star, but only on camera. Track 12 of the album “Doing It Wrong,” features Stevie Wonder. With no actual lyrics from him, you can still feel his presence in the atmosphere and towards the ending of the song you hear a harmonica solo from Wonder himself.

One of the most critical songs of the album is “The Real Her” featuring Lil Wayne and former Outkast member Andre 3000. Full of memorable and emotionally honest lyrics, this song has Drake showing his audience how much women try to hide themselves and how he wishes they would present themselves more truthfully which would in turn make them more beautiful.

Towards the end of the album, arguably the deepest and rare opening up of Drake’s raising in Toronto, “Look What You’ve Done” is solely dedicated to his grandmother who obviously has had one of the largest impacts on him and his career. The lyrics and moderate flow of music can’t help but make you somewhat emotional about family and how important role models can be.

The support from his grandmother lies in every phrase he sings and without even knowing who he is you can apprise that his words come straight from the heart. In the second verse he praises his grandmother’s confidence in him by saying, “Told you I think I’m done acting, I’m more in touch with the music. You said either way I’ll be a star, I could go so far.”

Still reaching out to his fans more than ever, he strays away from society’s expectations and wants from him by sharing his own life story through music and following his own path to stardom.

“Listen, enjoy it, buy it if you like it…and take care until next time.” – Drake

this is a great article, drake is my favorite artist and i think by far he has the best album of the year.