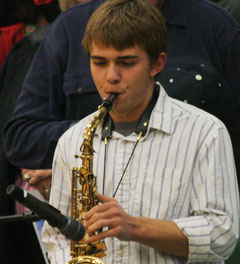 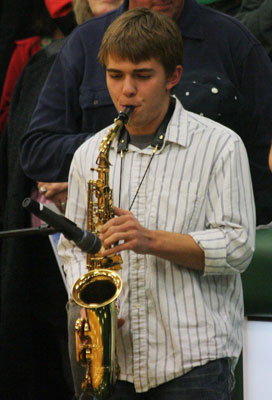 “At this time if you are able, please stand for the performance of our national anthem, performed today by Rock Bridge junior, Kaleb Jacks.”

A hush comes over the crowd of fans anticipating the beginning of the basketball game as they respond to the announcer’s request, rising and facing the large flag hanging near the front of the gym. Unlike most performances of the renowned “Star-Spangled Banner,” this version will not be sung. Instead, Jacks will perform the anthem using his skills on the alto saxophone.

Though many from the music department have performed the national anthem before, when Jacks asked assistant principal David Bones about doing an instrumental version of it, Bones was surprised. However, Bones embraced the opportunity to showcase the school’s wide talents and abilities.

“It was the first time I’d heard of that, but it was just totally like Rock Bridge,” Bones said. “We do things right, and it doesn’t matter if it’s singing or instrumental. I thought it was really cool.”

Though Bones had not heard of performing an instrumental version of the “Star-Spangled Banner,” the idea is not completely unheard of. Jacks was inspired to perform the theme after listening to other fellow musicians.

“I’d seen it done from some players that I look at,” Jacks said. “I thought it would be a good idea so I learned it. I’ve [also] played [the anthem] for MU, and I have played it for a [Friends of the National Rifle Association] banquet.”

Apart from the time he devotes to the Wind Ensemble, an audition-only school band, and Jazz Ensemble, Jacks actively works on his skills outside of the classroom. He plays in a couple of combos which sometimes perform in public places, such as restaurants. He practices his saxophone for about an hour every night and enjoys listening to professional saxophonists, such as David Sanborn. Wind ensemble director Steve Mathews says this habit of listening to professional musicians is essential to getting better as a high school musician.

“For you to know how you should be sounding,” Mathews said, “you need to try to replicate somebody that’s really, really good. So just like high school athletes want to try to model off of a collegiate or professional athlete, it’s the same thing. That’s how you’re going to get good — by listening to pros play.”

In a world of performances and rehearsals, Jacks’ dedication to his instrument carries him through each song, each phrase, each note. With so much playing time, he doesn’t forget the important impact music has had on his life.

“My favorite thing about playing the saxophone is being in control of what I want to hear and enjoy, as well as expressing myself through my music,” Jacks said. “It gives me access to communicate my personal thoughts and ideas in ways words cannot.”