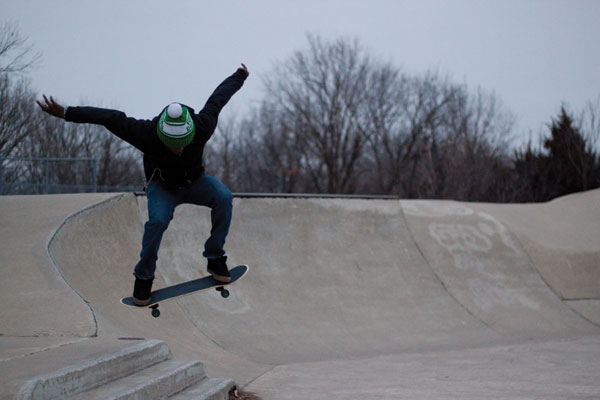 The cracking sounds of a skateboard hitting the linoleum of RBHS brings curious eyes of passersby to junior J.D. Griffin.

To Griffin, skating is more than just an activity. It’s a critical part of his life.

“I feel like when I wake up, get dressed and everything, I automatically grab my board,” Griffin said. “It’s like an automatic response. I can’t leave it.”

Griffin skates so often that he’s even attracted groups of people outside of the North commons. He not only shares his talents in plain view to the students,  but also shared with one of his family members.

“I started skating in, like, fourth grade,” said his cousin, Devonte Griffin, who sees Tony Alva as a role model, “his style is just so mellow.”

Both boys started skating when they were younger, which makes for an obvious advantage over beginners. Their skills came from hours of skating at the local skate park working to perfect each trick. Instead of only focusing on their own aptitude, Devonte  Griffin shares inspiring words.

“I just tell them to be confident and flow with it, be smooth and take it slow,” Griffin said. “With that, it feels like you’re gliding on earth, hitting every spot that Mother Earth made for you.”

Encouragement in others to get involved with something on a daily basis is something the cousins can’t stress enough. The legalization of skateboarding in on Columbia’s city streets —put into place Dec. 11 with Pednet’s help — is hoping to facilitate. Skating “promotes a healthy and active lifestyle,” director of Healthy Community Initiatives Sam Robinson said. “It’s also an important means of transportation.”

With this law, skaters like J.D. and Devonte Griffin are free from any trouble they originally may have gotten into because skating on the streets.

“I’ve seen, like, 13-year olds get in trouble by the park ranger for not wearing their helmets, but not really anywhere else,” J.D. Griffin said. “But they keep going. She’ll leave, and they’ll be skating again.”

Although there are kids who haven’t been getting into trouble for skating, J.D. Griffin has had a hard time getting him out of it. On senior prank day, last spring, a janitor went after him for skating in the main commons and the circle drive.

Because of such instances, some see certain stereotypes  in those who skateboard.

Even though Bryant has pre-conceptions about skateboarders, the idea of those assumptions doesn’t faze J.D. Griffin.

“I don’t care about stereotypes, like, not really. If they don’t know me, they don’t know how everything is,” J.D. Griffin  said. “You can see us as a stereotype, but I’m just my own person for real, I’m still going to skate either way it goes.”

Griffin’s Hollister jeans, t-shirt and a snapback make him seem like an average student at RBHS. But behind that is a 17-year old dreamer.

Devonte and J.D. Griffin  “started skating, and now I just look at everything, and it just flows,” J.D. Griffin said. “I don’t really know why my life’s different; I’m open to more things. I’m willing to take a risk, you know, take that fall.”

His commitment to skating is that of athletes to a sport, except his practice can be throughout the day not just after school, riding his board from class to class.  He aspires to skate professionally — to be in the same league as professional skateboarders Paul Rodriquez and Bob Burnquist.

“That’s the dream. That’s what I’m looking for. If I could do that, it would be amazing,” J.D. Griffin said. “It would just be so amazing. There’s no words that I can say to just picture how it would feel to be sponsored. Just skate every day like it’s my job. It’d better than sitting here at a computer, you know?”