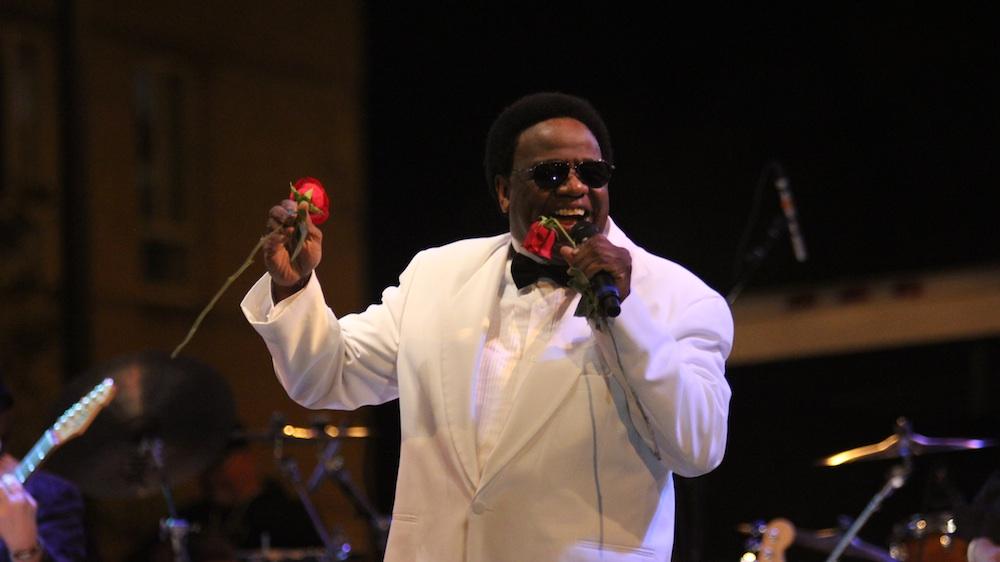 I had been looking forward to seeing Al Green for months. His song “Let’s Stay Together” was the song of my first relationship, back in junior high, and he had always held a soft spot in my heart.

So today, I arrived at the ticket booth, with my press pass in hand. Physically jumping up and down with excitement.

“Sorry miss, you can only use this once,” the ticket lady said.

My fellow reporter, Trisha, had used it once earlier that day and left the vicinity. Apparently, that’s not allowed.

So, I had a mission: to see Al Green, the man of the festival; the man of all men.

Finally, in a tiny parking lot for some small business, right next to a U-Haul, I found a group of enthusiasts. They were a bunch of Al Green fans that couldn’t pay to get in, but were there with their lawn chairs and drinks, ready for the show. We were directly behind the stage, and through a crack, we could see him walk on stage. There was a chain link fence between us and him.

Man, was I glad I wore converse tennis shoes. I, one step at a time, climbed to the top of the fence so I could see over on to the stage. The show had begun, and we could hear him singing, the blues king. The huge crowd, that looked like one big jacketed mob to me from up on the fence, swayed to the rhythm.

I looked over; the watch lady, deemed by our little group “the mean lady who won’t let us see him,” was deep in conversation with another watch person. I looked down at the group, and two of the older men said, “Go for it! We promise not to look up your dress.” I laughed at the second comment, but the first one I really considered. Could I really scale the fence?

My brain just kept saying, “Al Green is right over there. Just go. You’re so close.”

So I jumped onto the high voltage box on the other side, as my group of new friends hooted and cheered saying, “You go girl! Run!”

So I did, as inconspicuously as one can, run into a VIP only section of the concert.

Al Green was superb. He owns any stage he is on. And as if his white tuxedo jacket wasn’t charming enough, he began to throw red roses into the crowd. Every person in the place went nuts. Two of my friends from my rebellion group had jumped after me, and came over quietly, saying, “How awesome is this?! We see Al Green!”

Unfortunately, only two songs after I got so close to this man of magic, this music genius, I was found out.

“Where is your pass?” they said.

I tried to make up an excuse, but my emotions were written all over my face. My eyes said, “I am lying.” And my mouth said, “Please don’t make me leave. It’s Al Green.” But, alas, rules are there for a reason. So they asked me to go back to my moocher group.

I returned to cheers. A group drank to me and my two fellow rebels, saying that Al Green was worth it.

And he was. This day, those moments, being that close to this man of pure blues made me the happiest I can think of. Al Green, the legend, will always be king.

“Lovin’ you whether, whether, times are good or bad or happy or sad.”

Raphael, Great journalism comes from journalists who are willing to take that risk.

Sorry if I offended you Raphael :/

I’m not so sure it’s a great idea to pretentiously publicize your your illegal actions.

Sounds like an adventure! And sorry about that pass…