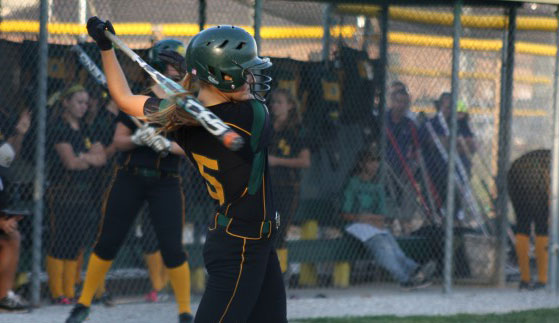 Junior Lindsey Grant said the girls played a good game all around with senior Krista Blomenkamp hitting a grand slam in the first inning. However, the following day, the girls lost their second game of the tourney 4-3 to Hickman.

Junior Sara Ashbaugh said everyone played well, and the Bruins were winning until the sixth inning.

“Everyone did really well … especially Connor Logsdon [who] did a good job pitching,” Ashbaugh said. “We were winning 3-1 until the bottom of the sixth, when Hickman’s Sydney Washington hit a home run that scored three runs.”

Although junior Isabel Bouchard wasn’t feeling well enough to play at Thursday’s game, she attended the game and supported her team members, happy with how far the team has come this year especially with only two home games the entire season.

“I’m just proud we could all pull together till the end,” Bouchard said. “ We battled so hard in our last game against Hickman that no one should feel ashamed. We had so many away games this year and that made it hard to focus on school and stay healthy. But we go through all of that, and we’re closer this year as a team than we’ve ever been.”

Ipsa Chaudhary writes for the Rock. That’s all you need to know. (Plus she's also the in-depths editor.) To contact Ipsa, send an email to ichaudhary@bearingnews.org.