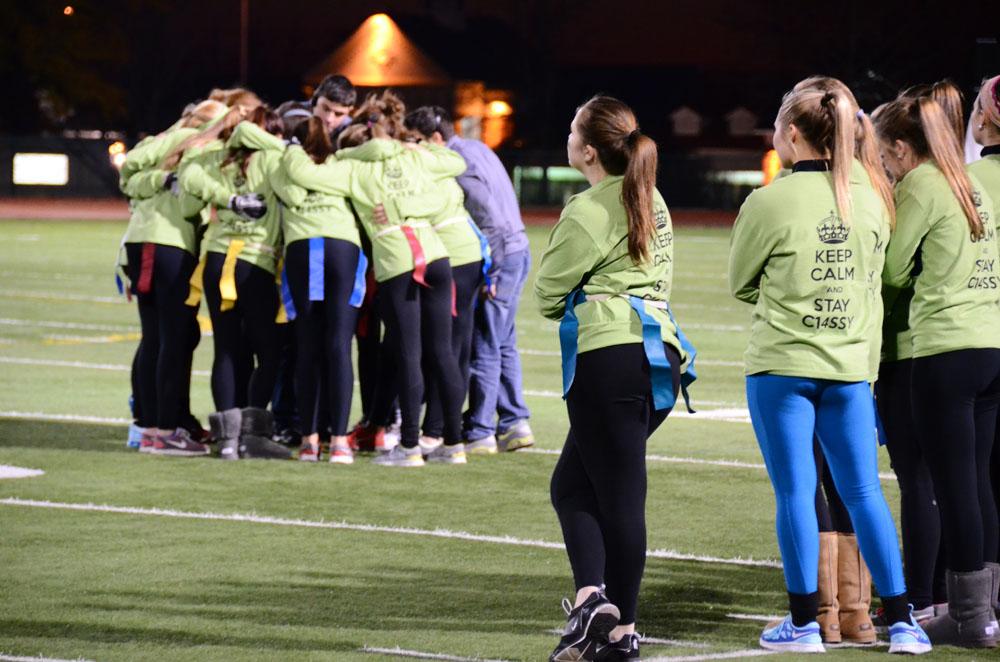 As their teammates on the side lines look up to the stadium lights, the rest of the Juniors huddle together for both tactic, and warmth, brain storming a game plan to beat the Sophomores. Photo by Elizabeth Upton

As the school bell rang at 3 p.m., dismissing the student body, the members of the sophomore, junior and senior Powderpuff teams prepared to face-off against one another. The girls played 20-minute games of flag football with proceeds from the event going to the Food Bank.

The first contest was between the sophomores and juniors. With an intense game ahead of themselves, sophomore Madeline Kuligowski knew the girls had to work hard if they wanted to prevail over the juniors.

“It was really intimidating,” Kuligowski said. “You’re looking at girls who are preparing to attack you. That’s a pretty frightening feeling. I kept getting upset because I kept getting latched onto. I knew that all the players were going to be playing dirty. If you play against dirty, you’re going to be playing back dirty. I was overall p—– because I felt like I had a lot more pent up aggression than I had let out.”

At the end juniors overcame the sophomores 12-0. The juniors headed on to face the senior class, the returning champions from the 2011 Powderpuff game.

The class of 2013, now-seniors, prevailed over last year’s senior class to break the ‘seniors always win’ tradition of Powderpuff, and that victory was a motivator for this event.

“Last year, it was really exciting because we went into our game with the seniors knowing it is generally rigged,” senior Abby Spaedy said, “so we didn’t expect to win.”

As this year’s juniors awaited their competition on the field, the seniors entered on a yellow firetruck with the sirens wailing and the Bruin Boys, a team of boy dancers, tailing them.

“Well, it was a big eye opener for us, I think, because they came in on my firetruck. And we knew we had to top that so I think it gave us a boost,” junior and Bruin Boy Cooper Smith said. “It was a cool experience because it was the MU firetruck they use for the games. Performing was super cool, it was a rush, and I think from what I’ve heard, it was really entertaining.”

The game began and the rivalry started. The juniors and seniors went back and forth, each inching closer and closer to the touchdown line only to be shut out by the opposing team. In the end, the seniors ended the game 13-0, winning for the second year in a row.

“The seniors are really intense because none of them are scared to get in your face and actually play the game,” junior Erin Concannon said. “I think the juniors really stepped it up this year and we played really well. The seniors are a tough team, but we held our own out there.”

Even though the seniors won, the juniors looked past the competition and were proud of playing for a great cause. The girls raised $1,200 from entry fees for the Food Bank. However, senior Sienna Trice said that the aggressive determination of her team allowed the seniors to come out on top two years in a row.

“We were really prepared last year and everyone was ready,” Trice said. “Losing was not an option.”