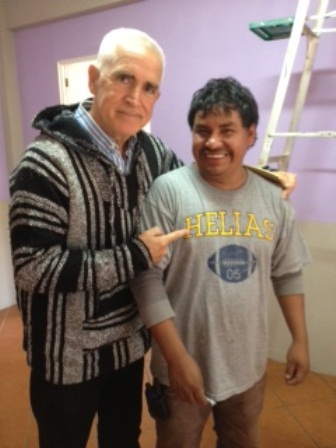 Former teacher and baseball coach Ron Widbin poses with a Guatemalan student wearing a shirt from an RBHS rival: Helias. Widbin is asking RBHS staff and students to donate t-shirts supporting the Bruins to clothe children in Guatemala. Photo provided by Denise McGonigle.

It’s not only in Columbia, MO. where the community supports the Bruins.

Former broadcast journalism teacher and baseball coach Ron Widbin and his wife are spending a year in Guatemala. Widbin is showing people in that country how to use a camera and report stories, and his wife, also a former Columbia Public Schools teacher, is educating the children in their community.

“They just decided that they wanted to do this mission work,” McGonigle said, “so they went to live in Guatemala for a year.”

Widbin sent an email to fellow baseball coach Justin Towe with a picture of a person from Guatemala wearing a Helias T-shirt. In the email, he said, “Look what I’m having to deal with over here. Our competition!”

Towe then forwarded the email to McGonigle. She said her and Towe got to talking and thought of having a drive to collect RBHS T-shirts to send to the citizens of Guatemala. So far, McGonigle has collected at least 20 shirts, creating a sizable pile building up next to her desk.

“I think it’s going to warm [Widbin’s] heart,” McGonigle said. “He has a really big heart, and he loves Rock Bridge. … After he retired, he kept subbing here because he really just wanted to be around Rock Bridge.”

RBHS Assistant Principal David Bones said there are several T-shirts in the basement from past RBHS events, including homecoming, and he plans on donating those for McGonigle to send to Guatemala.

“We usually keep [the shirts] around in case there’s a need for them,” Bones said. “This seemed like a cool opportunity to be able to help some people out and move some of these shirts along.”

Students and faculty can bring RBHS shirts of any size to Mrs. McGonigle in the main office.

Money earned under the table piles up

Maddie Magruder is the sweetest person you’ll ever meet. No matter what, Maddie never fails to evoke a genuine smile. Her undying love for Fun, Mumford and Sons, and James Franco is really quite inspiring. Maddie’s natural habitat includes knitting, watching movies, belting out a Broadway song, or laughing so hard she cries. Maddie is a tremendous writer and Production Manager, a determined intellect, a fierce friend, et une actrice incroyable. You’ll really never meet a more loyal and down to earth person, not to mention questionably the most adorable girl on the planet. She’s just quirky and fun. Some say Maddie Magruder is a Disney princess. But Maddie is better than a Disney princess. She’s real. Contact Maddie Magruder, production editor, at mmagruder@bearingnews.org. By Julia Schaller.