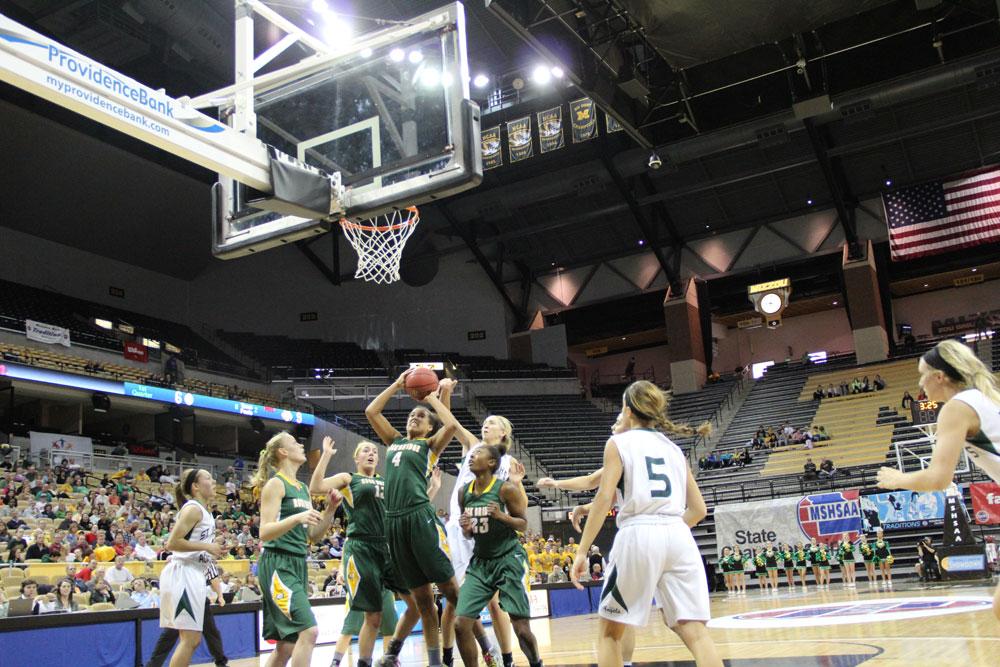 Sophomore Cierra Porter makes a basket during the first quarter of the game. Photo by Daphne Yu

After a nail-biting game, the RBHS Lady Bruins defended their state title tonight, March 16, with a 45-38 win in the championship game against St. Joseph’s Academy.

While Lady Bruins eventually took home the win, the first half just wasn’t their night. Though junior Cierra Porter won the tip-off, the St. Joesph’s Academy Angels lobbed in the first basket of the game. From there, RBHS went neck and neck behind the Angels until senior Makenzie Skrabal was able to put the Bruins up 7-4 with a three pointer. Junior Chayla Cheadle’s additional three-pointer widened the lead, but the Angels were able to come back, ending the first quarter in a 11-11 tie.

In the second quarter, the Angels seemed to run the game, making basket after basket while the Lady Bruins fell behind. Amidst many attempts by RBHS to score, the ball just didn’t want to go in, bouncing off the rim numerous times. The Angels were able to pull through the half with a 25-15 lead.

“St. Joe[seph] came out on fire,” Skrabal said. “They were making almost every shot they took but we knew that couldn’t last the entire game. There were definitely nerves in the beginning, but we all had to just settle down and calm ourselves.”

A three-pointer within seconds of the third quarter by junior Chayla Cheadle took a toll on the Lady Bruin morale. They came back more confident, more eager.

“That was huge,” Skrabal said. “That shot just fired us up and helped us to keep pushing and it gave us a good lead that we needed.”

While their offense was strong, the Angles still gained ground, ending the third quarter 25-31, St. Joseph’s Academy with the lead.

The fourth quarter was the turning point. Again, Chayla Cheadle returned to the hardwood to score the first points in the fourth, followed by sophomore Sophie Cunningham’s exciting 2 pointer. Three minutes later, the Bruins were back in the game with the score at 33-36. With five minutes left and a 3-point difference, the game was still up in the air.

Then, RBHS took the court by a storm. Junior Kayla Cheadle scored a two-pointer, leaving Bruins only one point behind. RBHS defense was as tight as possible, intercepting more than three attempts by the Angels to score, and Junior Audrey Holt’s two pointer put the Lady Bruins up by one point with three minutes left on the clock. Sophomore Cierra Porter’s three-pointer boosted the Bruins lead, bringing it up to 40-36 with 55 seconds left in the game.

In response, the Angels tried to toughen up their defense, which instead resulted in a slew of fouls, giving RBHS the chance to widen the lead.

“I was praying that we’d make our free throws,” Skrabal said. “I don’t think [St. Joseph was] panicking. If we shoot free throws and miss them, then they still have a good chance of coming back into the game. Thankfully, we made most of them.”

Bouncing off of fouls by the Angels, Kayla Cheadle and sophomore Sophie Cunningham’s free throws tipped the Bruins to 43-38 with 27 seconds left. The Angels fouled Cunningham again, and she took her stance, ready to make two baskets in a row. After making the first shot, the score stood at 44-38. With the game in the bag, 11 seconds left to go and another free throw left for Cunningham, head coach Jill Nagel called a timeout.

In a moving moment, senior Hannah Dressler, injured in the Hickman-Rock Bridge game earlier this season, stepped onto the court for the last seconds of the game

It was “so emotional,” Skrabal said. “It was amazing that coach let her do that. [During the timeout, Nagel] didn’t say anything. no one knew she was going in until Hannah checked in and that’s when I started to cry.”

Cunningham made the free throw, and with the Bruins up 45-38, the buzzer sounded and the game was over: RBHS had won the state title again.

“I don’t even remember thinking [when the final buzzer sounded,]” Skrabal said. “I was just so proud of everyone and everything we’ve accomplished. All that we’ve been through to finally get to this point.”