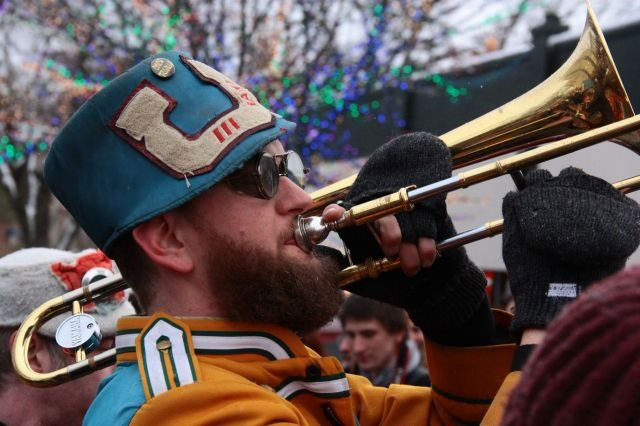 The annual March March parade pulls Columbia forward into spring every March 1st. And though this year’s march saw bitter temperatures and determined snow, the liveliness and cheer of the parade still somehow made it feel like spring had come. Once the drum line provided a rousing back-drop for the parade to march to and the procession began, the snow started to feel far more like pretty confetti than bits of coldness falling from the sky.

Moving from the Boone County Courthouse Square to the Missouri Theatre, the parade wasn’t terribly long, but the amount of craziness it encompassed more than made up for the short time-frame. The True/False film festival, which hosts the parade, encourages everyone “to dress colorfully, to construct and carry fun props, to make noise and to push the level of imagination,” making for a festive and double-take-causing march, whether it was the man on an improbably high unicycle, or the giant, walking, talking vegetables or a Mad Hatter. Before long, people were twirling fire-sticks with nonchalant ease while throngs of onlookers clapped and cheered.

Being a part of that pulsing, lively crowd puts a grin on your face and makes you forget everything else. Even if it means not being able to feel your hands or getting hit in the face with twirling streamers a couple of times. After all, March March only comes around once a year, and its filled with good music, happy people and free strawberry cheescake popsicles. What more could you want?