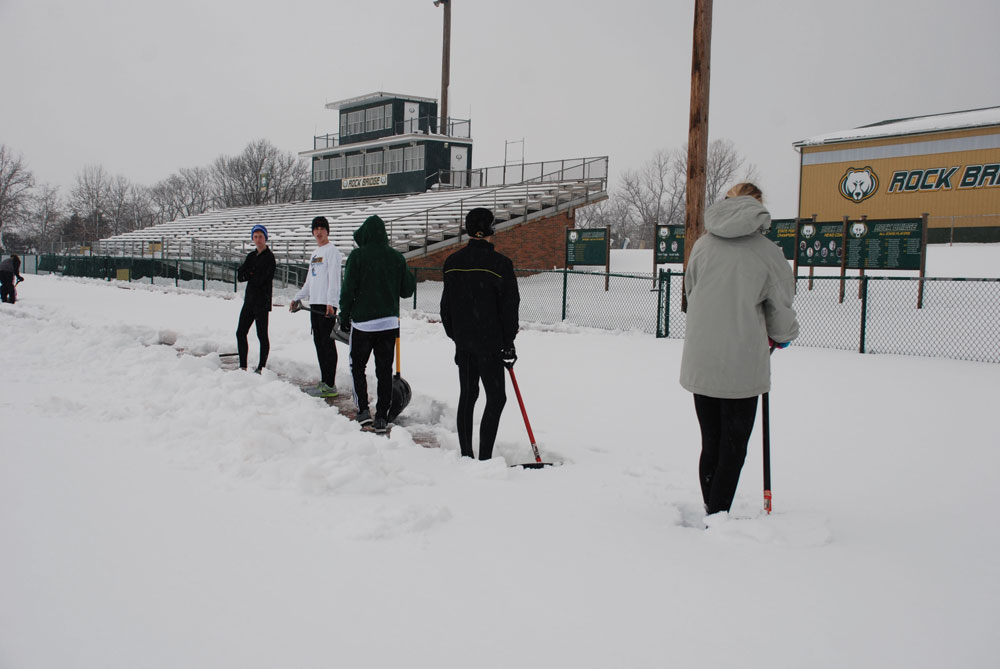 Digging deep: Members of RBHS track team shovel the blanket of snow that covered the track outside the school. Photo provided by Annette Schulte
[dropcap style=”2″ size=”3″]M[/dropcap]More than a foot of snow fell last week in Columbia as storms Rocky and Q stopped all motion throughout the city. Roads were shut down after

dozens of wrecks occurred. Walmart, Sam’s Club and other stores closed due to heavy snow accumulations on their roofs and Columbia Public Schools canceled classes for four days total. Missouri Department of Transportation called the conditions “hazardous” and encouraged all motorists to stay off the roads.

“For at least the first few days, the driving conditions weren’t the best. They cleaned up the main roads pretty quickly, so after the first day, they weren’t too bad,” sophomore Humera Lodhi said. “But inside the neighborhoods was not good at all, especially my subdivision. Actually my own car got stuck in our driveway, and we had to shovel snow out of the way. But a person from my neighborhood was really nice and went around clearing roads with his own miniature snow plow.”

Activities Director David Bones said the school is having to cram a lot of events into less time because of the snow days. He said RBHS doesn’t know when they are having the Courtwarming Dance yet, but the Courtwarming assembly is scheduled by RBHS for the March 15.

“For me the bigger challenge is to find a way to continue to celebrate all the things we wanted to celebrate because we’ve got so much great stuff going on,” Bones said. “The goal of the assembly is just to show off all the great stuff that is going on at Rock Bridge, and we’ve missed that opportunity.”

More than the assembly and dance time changing, classes are feeling the snow day strain. Advanced Placement U.S. Studies teacher Debbie McDonough said because the AP test is at a specific date teachers and students don’t have a lot of room to lose days, as every day is necessary to prepare for the test, but she found ways to contact her students.

“With [David] Egan and I, we do a lot of texting, and then he is better at the Twitter-business, so he takes care of that … and I put the information on Angel,” McDonough said. “One of the things I’ve learned is because we have Angel available, I can use that so that students know what they should be doing at home even though they aren’t in class.”

Creative Writing teacher Jennifer Cone said the difficulties were a lot less for her as she doesn’t have a partner teacher.

“I’m not partnered with anybody, so it’s easier for me to adjust. However in the past, when I taught [U.S.] Studies, it was horrible,” Cone said. “Not only do you have to go back and look through the schedule, but you also have to have to work it out with your partner. … You have to reschedule essays and all of that. So, for me, no problem.”

Students, too, had to rearrange their schedules. Senior Noor Khreis struggled to catch up with her photography and astronomy homework, because they both required in-school programs or facilities.

“In photography we’re behind because we can’t develop the film,” Khreis said. “Because unless you have a dark room in your own house, [you can’t do it yourself.]”

Some, however, didn’t find the snow days to be a nuisance, enjoying their days off. Senior Matthew Schulte said he didn’t feel behind in classes and really liked having the days off.

“I was pretty excited about it,” Schulte said. “I slept in, caught up on sleep and homework … I hung out with friends.”

And while most Columbians gathered by their fireplaces, some found themselves without power. According to Boone Electric, more than 8,000 customers were without power. But despite all the complications associated with all the snow that came down, junior Inas Syed believes the biggest issue was the fact that she wasn’t able to attend the courtwarming events including the game, king crowning and dance that were all supposed to occur.

“I am upset about the rescheduling of the courtwarming,” Syed said. “I’m super upset the game was cancelled. I was very hyped and I wanted to attend and support my team.”

By Manal Salim and Maria Kalaitzandonakes

Manal Salim. A name known to all in the journalism room. A name associated with rainbows and sunshine. If she isn’t smiling and asking what she can do for others, Manal is nearly dying of embarrassment from the constant compliments that her friends shower her with. No one can resist smiling in her presence. Manal is the epitome of happiness and is the only one who can justify the writing of a bio as cheesy as this. Unaffected by the mother nature, neither heat nor sunshine affects Manal’s porcelain face. Looking at Manal is like looking into the sun: always bright, always happy, but without the obnoxious constant “glass is half full” outlook that seems to get on people’s nerves. Or at least mine. So do yourself a favor and get to know her. Written by Trisha Chaudhary. Contact Manal at msalim@bearingnews.org.