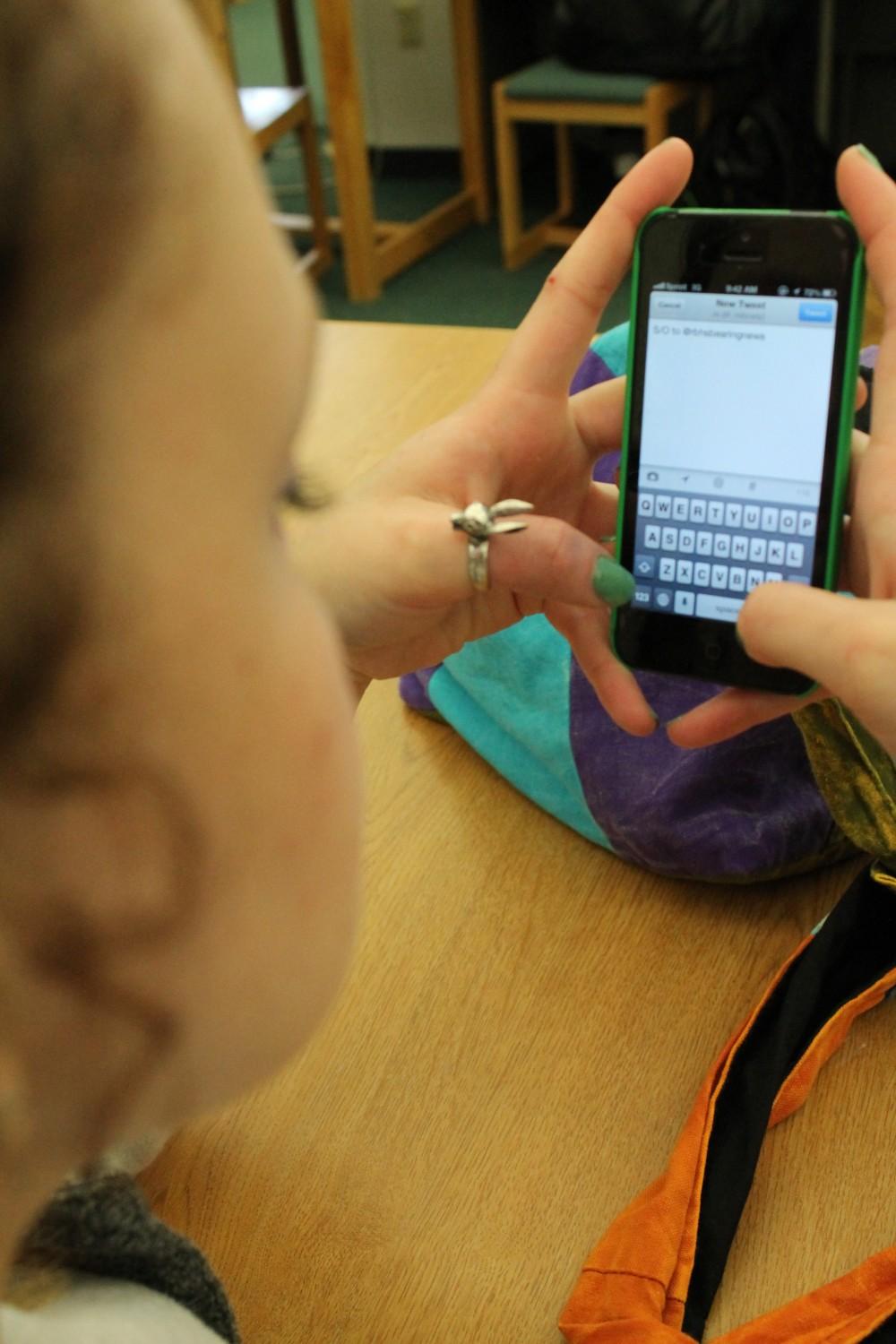 Junior Mariah Brady looks at her phone while she prepares to send a tweet. She allows people to view her sporadic personality through her Twitter profile. Photo by Maddy Jones

With 450 followers and an average of 47.3 tweets per day, according to tweetstats.com, junior Mariah Brady is deemed “Twitter famous” by her peers. Although she prefers to avoid using the phrase in reference to herself, Brady said the fun and comical nature of her tweets may be what has brought in such a sizable online following.

“I think other people label me as ‘Twitter famous,’” Brady said. “It’s just because I’m just so out there and so crazy, and I just don’t have a filter. I think that’s a big thing for people to see that I have this crazy, just sporadic mindset.”

Junior Cooper Smith said Brady possesses some degree of Internet stardom and has earned this title among her peers. He attributes this to her friendly demeanor and likeable personality.

“I feel like Mariah is pretty Twitter famous,” Smith said. “I think that she tweets what’s on her mind, and she’s friends with everyone and she doesn’t really have beef with anybody. No one’s really mad at her, and everyone thinks she has a funny sense of humor, which attracts popularity in her tweets.”

Brady confirms and embraces her daring personality and the way it manifests in her tweets.

“Most of my tweets are pretty upbeat and pretty funny,” Brady said. “I have no filter. I love making people laugh. It’s something I’ve always been good at.”

Brady said Twitter has served as a positive outlet for some of the thoughts she may never have spoken out loud or in person. Despite this, she feels her tweets accurately reflect her unique and sometimes risky sense of humor.

“There’s been a lot of times where I’ve held things in just because I didn’t know how people would view them or if they would laugh with me or at me,” Brady said. “There’s such a wide range of things that I joke about, and [on Twitter] there’s so many other people that can enjoy them.”

Comparing his interactions with Brady in person to her online presence, Smith said he thinks the two are similar. They both contain her universally-appealing persona. He said her tendency to be very direct is what makes Brady’s personality so noticeable.

“Based off of her tweets and me talking to her in class, [her personality is similar online and in person] because of just how chill she is with everything and straightforward,” Smith said. “She will literally be blunt with everything.”

Brady said, overall, Twitter has acted as a positive aspect of her life. She said the ability to express her vibrant and humorous charisma to hundreds of online followers has labeled her as a fun and comical person, which she feels is an accurate statement in terms of her personality as a whole.

“People know that when they’re around me, they can laugh,” Brady said. “And that’s probably what I’m going to be doing, too.”