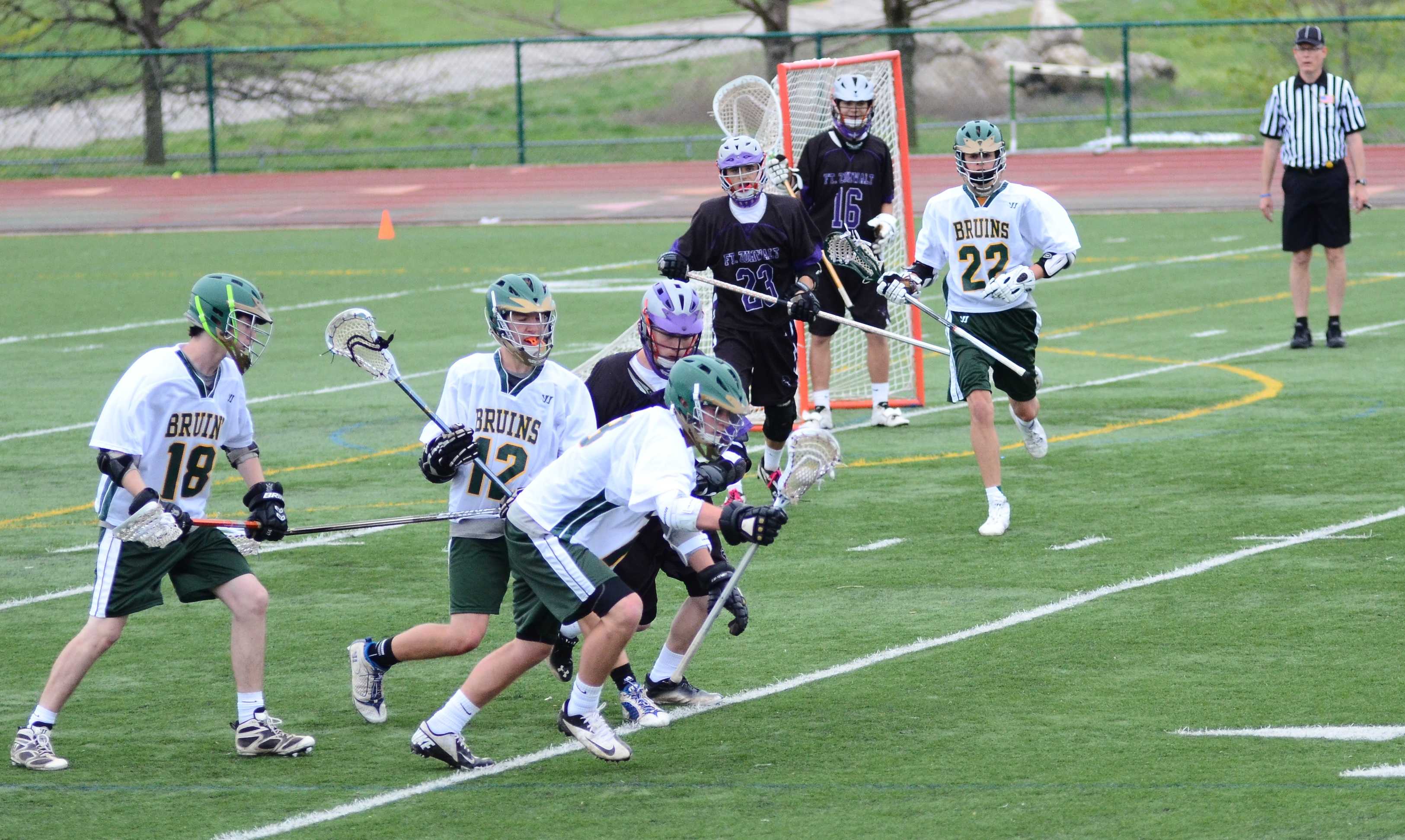 Rock Bridge's Eric Glennon moves with the ball in the second quarter of the bruins six to five loss at the hands of Fort Zumwalt on Sunday. Photo by Pen Terry

The boys lacrosse team (4-3)  took the field Sunday against the Fort Zumwalt Jaguars (4-2) on RBHS field, yesterday, April 27 in the mid-morning.

Starting early with energy, the Jaguars took the lead on a Devin Strauss goal three minutes into the first quarter. By the end of the first, Fort Zumwalt added another goal despite intense defensive play by RBHS  junior defensive pole Seth Johnson and junior midfielder Keegan McGonagle.

Although the Bruin defense put up quite a fight, the home team offense was unable to net any goals in the second quarter despite ample opportunities, junior attackman and co-captain Caymen Menard said.

“Our offense was moving the ball around well and we were getting shots but a lot of them were missing and then ones that were on [target] the goalie saved,”  Menard said of their scoring trouble.

Returning from halftime, the Bruins began hitting their stride. With two quick goals by the two other co-captains in McGonagle and  private school student Cole Russum, RBHS  tied the game at two with 5:45 left in the third quarter. But, with 24 seconds left in the third quarter, Fort Zumwalt’s Dylan Clamors answered with a goal to pull the Jaguars ahead.

The teams traded goals two more times in the fourth quarter bringing the score to five to five. With 2:48 left Fort Zumwalt’s Coleman Beckerle put the Jaguars up six to five which would be the final. Unfortunately losing their following game to the Marquette Mustangs immediately following the close game to Fort Zumwalt, the team will now need to win two of their next five games to make the state playoffs. The Bruins have the weekend off, but resume  play next Monday against Wentzville and Wednesday in the anticipated Hickman match up.

“The team put forth a good effort,” said Menard after the game. “We did a lot of things really well. We were out here trying hard, but in the end we didn’t come out on top.”

By Pen Terry and Kaitlyn Marsh