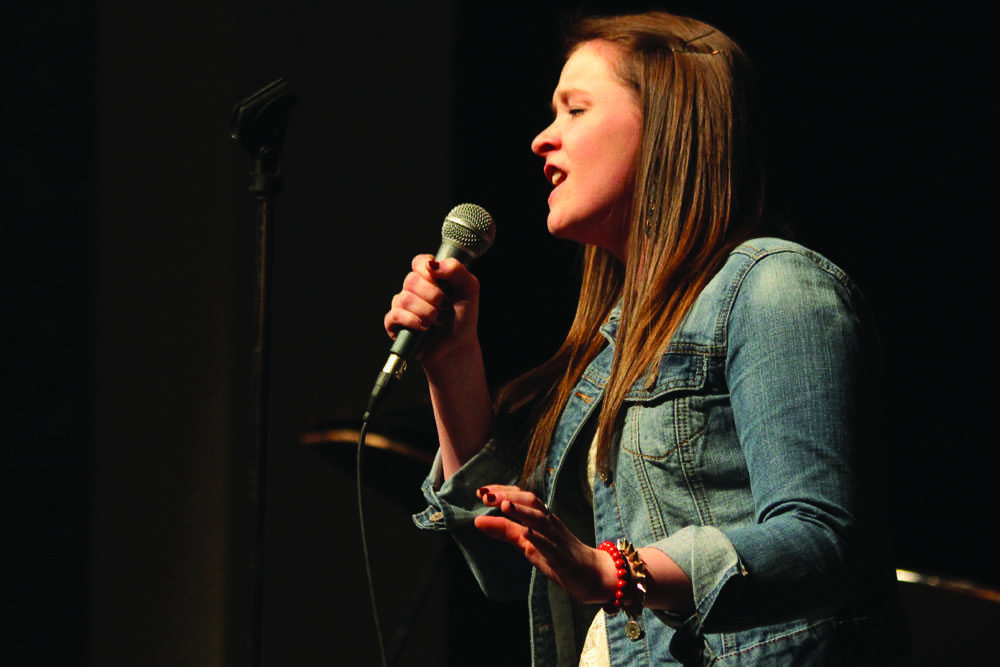 Junior Claire Herndon auditions for CAPERS by singing “Titanium” by David Guetta and Sia. Senior David Wang will accompany her on piano.

Students have utilized hours upon hours to practice talents they plan to display this year at the RBHS CAPERS talent show. The 22 performances will contain an array of singing, dancing and even a barbershop quartet. The show will take place at 7 p.m. in the Performing Arts Center at RBHS on April 18.

Senior Jaynell Lardizabal told what she plans to do for the talent show and her courageous desire to perform at CAPERS for the first time.
“Well, I didn’t do CAPERS before so I just decided I was going to do it because YOLO [You Only Live Once],” Lardizabal said. “I just asked Dalton [Maggard] and everyone else if they wanted to make a cover of something, so we jammed and just decided to do ‘Crazy.’”

With the combination of a belly-dancing act and a jazz cover of a popular song by Gnarls Barkley, Lardizabal said her preparation has been more calm than stressful. Maggard, Joel Pruitt, Jashawn Linwood, Grant Flakne and Lardizabal built strong relationships as they worked together to find their “sound” through trial and error.

“We’ve been preparing for about a week and a half before the audition, and it’s just a really chill rehearsal, like we don’t really have any agenda,” Lardizabal said. “It’s just like, ‘Let’s try this,’ and there’s a lot of improv and jazz stuff, and with my band, that was completely improvised, too.”
A member of show choir at RBHS, Lardizabal said her willingness to perform in front of a large crowd improves her ability to perform well and confidently while on stage.

“No, [I don’t get nervous] really. I love performing, so it’s just another performance,” Lardizabal said. “It’s honestly never registered when I’m performing. I guess being in show choir all these years and just being a part of regular choir [has helped me], so it’s not really a big deal.”
Although Lardizabal is a seasoned performer, many CAPERS participants are new to the spotlight. Junior Claire Herndon, though in show choir, has never had an on-stage solo before.

“I’m pretty used to crowds because I’m in show choir and stuff,” Herndon said. “I’ve never done it alone with as big a crowd that will be there, but I think I’ll be OK.”

Herndon’s performance is a cover of the song “Titanium” by David Guetta and Sia. She practiced for months and eventually asked senior David Wang, a pianist, to see what he thought of the song.

“I called him into the practice room, and I had him listen to me and see what he thought and if he thought it was worth doing and something he could learn,” Herndon said. “So soon, we’re going to pick out the music for him, and we’re going to meet two to three times a week and just practice it.”

Being live on stage comes with stares from audience members and indirect tension which adds to the stress that Herndon plans on encountering. In usual acts of nervousness, Herndon explained what she believes may happen and how she plans to satisfy herself despite any judgment that may occur.

“When I’m nervous, I tend to take it up an octave, so I’ll sing it really high, and when it gets to a high part, I won’t be able to sing it,” Herndon said. “I’m not really worried about judgement from other people, it’s just me not living up to my own standards.”

While the audience will be able to spectate the show, the performers will not get a chance to view the other acts or themselves until rehearsals and will get a preview of what is to come to the auditorium at RBHS.

“I’m a little sad that I don’t get to sit and watch it from an audience’s perspective since I’m in it,” Herndon said. “But I am excited for the rehearsals, because I get to see everybody’s.”

Activities Director David Bones is also enthusiastic about seeing CAPERS, as it is one of the many RBHS traditions. He thinks it is a simple way to broadcast talents that other students and teachers may not have previously been aware of.

“We’ve got so much great talent at Rock Bridge, whether it be academic or athletic or in the performing arts and on and on. I think it’s just cool that we … celebrate that by providing opportunities for students to get to show off their unique talents and gifts,” Bones said. “I think it’s an awesome part of Rock Bridge culture.”

With the addition of the freshmen next year, changes such as Bruin Block and adjusted school schedules will be put into effect. But Bones said CAPERS won’t be affected by this.

“I don’t think [CAPERS] will change at all. We could get, obviously, some younger students participating,” Bones said. “But what I can say is I think it’s more important next year than ever to continue these great traditions like CAPERS because they are really a part of what Rock Bridge is all about.”