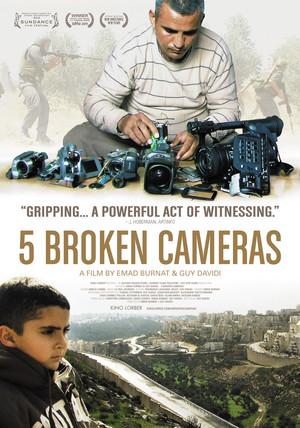 On April 30 at 6 p.m. a free screening of the Academy Award nominee for Best Documentary Feature, 5 Broken Cameras, will take place at Ellis Auditorium at the University of Missouri – Columbia. There will be a question and answer session following the film.

The Q&A panel will include Mohammad Saleh, a Graduate student at MU and Dr. Georg Smith, Professor of Biology at MU.

5 Broken Cameras is a personal firsthand account of the non-violent resistance of Bil’in, a village located in the West Bank that is surrounded by Israeli settlements. Co-director Emad Burnat bought his first camera in 2005 to film his youngest son, Gibreel, growing up, and eventually began filming the weekly local protest and the events happening in his village. The documentary is constructed in five chapters surrounding the destruction of each of his cameras. It offers an eye-opening view to the daily life of many Palestinians living in Bil’in and the rest of the West Bank.

Emad Burnat, a Palestinian farmer, and Guy Dividi, an Israeli filmmaker, co-directed 5 Broken Cameras despite the criticism they knew they would face. They learned to constructively use their cultural backgrounds and different privileges in the making of a film surrounding such a controversial issue.

The filmmakers hope people will come experience the emotional journey 5 Broken Cameras offers  “with open minds and without foregone conclusions.”

“When watching a film that deals with such a painful controversy, we know that people tend to shut down,” Burnat and Dividi said. “Most of us divide the world into right and wrong, good and bad, Palestinian and Israeli. We immediately take a side that corresponds to our identity, life experience, or ideology, even though these loyalties prevent us from fully experiencing the world. Reality is wonderfully complex, and we become frustrated when people fight to look at it with only one or two filters.”

Snoop Lion’s ‘Reincarnated’ does some justice to classic Marley influence

Yasmeen El-Jayyousi is a banana. She is a sweet and healthy snack, but with some brown spots that spring up out of nowhere in surprisingly flavorful bites. She is the most beautiful banana you will ever lay your eyes on, hailing from the wittiest species of the fruit. She might seems reluctant to come out to the front of the fruit basket, but it's only a carefully crafted illusion. When she's with her fruity friends, she shows off her creative and quirky personality and can blind a person with her charm. You will most likely find her in the Journalism Fruit Basket (Journalism room) concentrating on her art for the Rock, or giving relationship advice, or finding ways to stain the reputation of her equally gorgeous banana friend Afsah with the help of two other fruity friends, Anna and Jacqueline. Nevertheless, Yasmeen is the most creative and beautiful banana in the world, and to those of you who don't like bananas, it's time to get your priorities straight and reconsider. (Written by Afsah Khan with the help of Ashleigh Atasoy) Yasmeen is art editor for The Rock and BearingNews. Contact Yasmeen at yeljayyousi@bearingnews.org