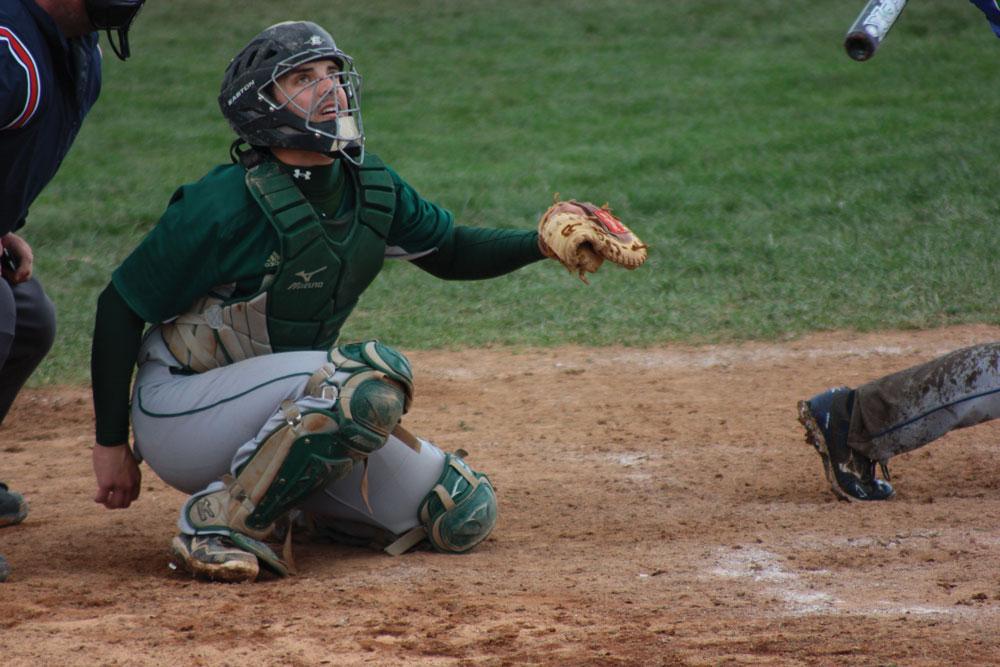 Eyes on the prize: Senior Tanner Cooper watches the path of a foul ball during the Bruins’ game against Christian Brother’s College High School on May 4th. The Bruins lost to CBC 11-0.

They say first impressions really do matter. That was certainly true on Monday when the Bruin baseball team beat the Hickman Kewpies 7-3. All 10 runs in the game were scored in the first inning.

Hickman was the first to bat and scored three runs off of the starting pitcher, sophomore Logan Twehous. In the bottom of the first inning, RBHS answered with seven runs off of crucial hits by Twehous, senior Jansen Smith, junior Michael Buxton, senior Matt Priest and senior Mike Nemec.

The Bruins dominated the game despite two major injuries. When senior catcher Tanner Cooper collided with a runner coming toward home plate in the first inning, he was injured, and Smith had to leave the game due to heat exhaustion in the second inning. Both players are expected to play in the upcoming district championship game against Camdenton.

Sophomore Eric Kuse replaced Cooper as catcher and drove in a run on a sacrifice fly in the first inning. Kuse says while injuries are terrible to the team and the player who is injured, head coach Justin Towe always tells them to be ready to step in.

Kuse is adamant that having substitute players produce a huge win was a great experience.

“We played great, we always have people stepping up,” Kuse said, “and the bench always cheers them on.”

Smith, who hit an RBI double in the first inning to score the first run for the Bruins, left the game during the second inning.

“I had a little heat exhaustion, I was really dizzy and I didn’t really know where I was,” Smith said, “but I will absolutely be back for the championship game.”

Smith also agreed that many players came through and added to the success of the team despite all of the substitutions to the starting lineup of players.

“It was a good morale-boost-win. We got a lot of people in there that don’t usually play,” Smith said. “Just about everybody in the lineup contributed today, and [junior Ryan] Bernskoetter got on the mound at the end and closed it out.”

Bernskoetter started pitching in the middle of the sixth, with the bases loaded and two outs. He ended the inning without giving up any runs and closed out the seventh inning, placing the Bruins into the district championship game this Wednesday.

Towe is proud of how his starting team and bench players competed for the win and how they composed themselves on the field.

The coach said the team would not do much different to prepare for the championship game against Camdenton, which was played Wednesday, May 15.

“It happened so fast that they don’t really have time to get nervous, “Towe said. “but we felt that we really prepared these guys to deal with anything that comes to them. We also expect Tanner and Jansen to be back for the championship game, which is good. We just go out there as a team, and do the best that we can against the team in front of us, whoever they may be.”

Luke is the outgoing and crazy of the juniors in Newspaper. He hates computers and prefers Motown and Classic Rock to today's hip hop and rap. Luke daily frequents either Panera Bread or B&B Bagel for breakfast. Despite his Czech ancestry, Luke prefers to dine on deep dish pizza and Chicago style hot dogs, as he is a native of Chicago. Luke is a Notre Dame fanatic, and often skips school to watch them play a variety of sports. As the commentary and blogs editor, Luke is the first ever sophomore editor for the Rock. (Written by Derek Wang)