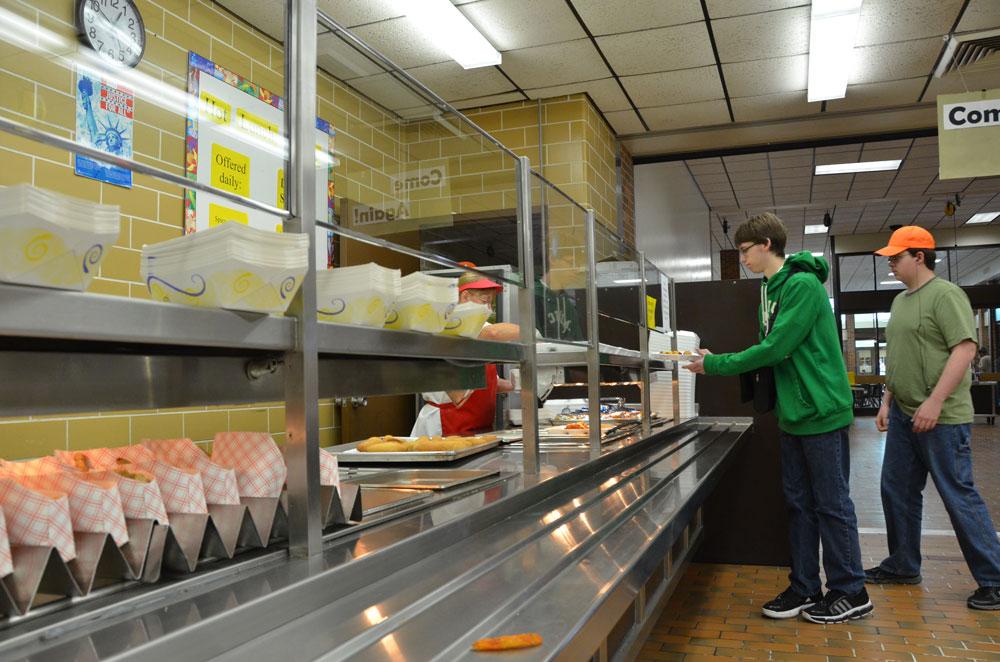 With RBHS hosting four grades next year, lunch will be more crowded. Off-campus lunch will not be offered to incoming freshmen and sophomores.

“Next year at Rock Bridge, on a certain day, it’ll be announced that the food trailer will be at Rock Bridge for lunch. They’ll pull it up out in front of Rock Bridge, and they’ll serve pulled pork sandwiches or something else,” Belcher said. “Students can go outside and buy a sandwich. We’ll try to serve something the students want to eat that way they don’t have to leave campus if they don’t want to. If it works then we’ll go buy a few more and try to make that part of way we serve students.”

Laina Fullum, director of nutrition services for CPS, believes this change will benefit the students restricted to a closed lunch.

“What our goal is, is to spread out the students, so they don’t feel like when they have to stay on campus or want to stay on campus,” Fullum said, “so that they’re not trying to compete with each other when trying to get through the line.”

Freshman Emily Unterschutz isn’t pleased with the closed campus idea next year. She fears it will take away from the high school experience.

“Open campus lunch is probably one of the things I was looking forward to most about high school, and taking that away makes me upset.” Unterschutz said. “In my opinion, it isn’t fair and we should be allowed to go where we please for lunch.”

CPS will purchase just one trailer at first to test out the idea, hoping in the future to purchase more if the students utilize it.

“We’re going to start out with one and see how well the students receive it,” Fullum said. “Of course it will be seasonal, too, so I want to start off slow, I don’t want to waste money.”

The trailer will travel among RBHS, Hickman, Battle and Douglas.

“We are going to trade off probably two times at [RBHS], two times at Hickman, then go back and forth between Battle and Douglas,” Fullum said.

The food won’t be prepared in the trailer because of Columbia Department of Health regulations. Instead, RBHS or Hickman will become a base kitchen to prepare the food. Then the food will be moved out to the trailer and finished.

“Our food trucks have to have a basic kitchen in Columbia. That’s how our department of health requires us to operate,” Fullum said. “Basically we will make either Hickman or Rock Bridge, or both base kitchens for the trailers and that way we’ll do a lot of the cooking to make it safe then move it out and finish off products to serve to students.”

In addition to the trailer, food stations will be set up around the school.

“Not only are we going to do trailers, but we’re going to do food stations away from the lunch line,” Fullum said, “[that way we] can spread the crowd out and give students some options.”

The lunch workers employed by CPS will prepare the food for the trailers, Fullum said. The food will also be different than the food served on the lunch line.

“It’ll be more of a barbeque type theme,” she said, “but we’re not quite there yet.”

Unterschutz is willing to try out the food trailer depending on what they’ll be serving.

“I will be willing to eat at the trailer if the food is cheap and probably good junk food.” Unterschutz said, “As long as it isn’t ‘government-food’ like the lunch, I’d definitely be willing to try if I could afford it as a broke teenager,”

RBHS is looking at putting the food stations in the North Commons or outside of the planetarium but nothing has been finalized, Shannon Brown, RBHS kitchen manager said.

Embarrassment proves to not be selective