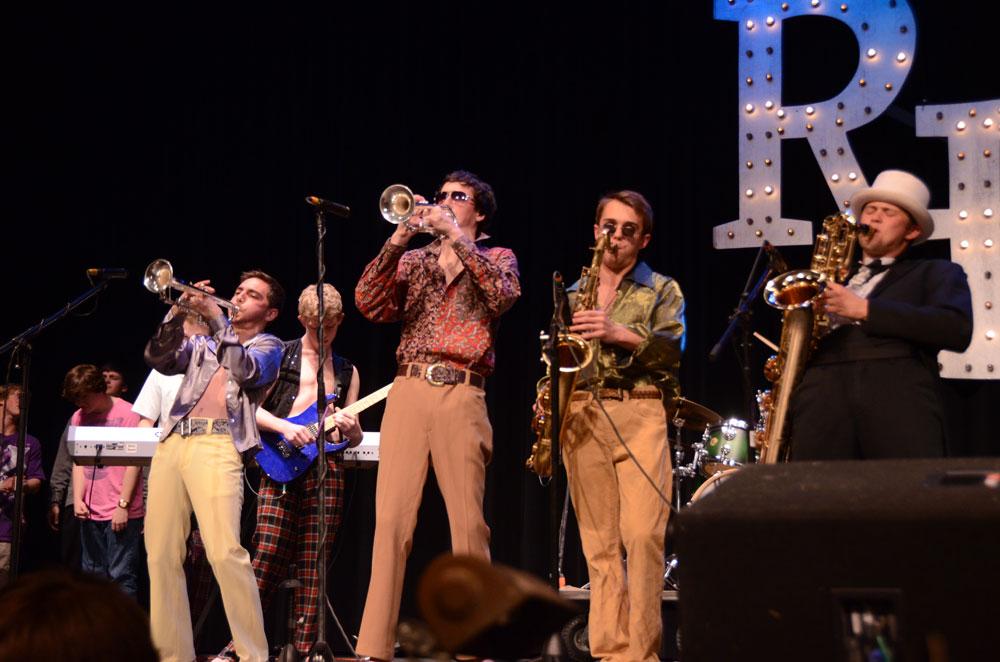 As the year draws to a close, seniors in the performing arts programs at RBHS look forward to pursuing their passion in college. Photo by Patrick Smith

It’s easy when you’re 16 years old to view high school as the place where students sit down, stare at a Smartboard for eight hours, take tests, go home and come back the next day to do it all over again. But for many graduating seniors, high school is a precursor to post-secondary education. It’s a place to figure out where they want to go with their lives, a place to discover interests and passions and opportunities.

RBHS students who graduate go on to become doctors, business leaders, movie directors, government officers. But for several seniors involved in the performing arts programs here, it is music, acting and entertaining that is their dream. It is the people who surround them, the education they have received the past three years, and their love for their art, developed as a Bruin, that have shaped this vision.

Senior Troy Guthrie, who will major in acting at the University of Southern California next year, is part of this group of passionate performers. Guthrie began his acting career in fourth grade, participating in plays with the local TRYPS program, Theatre Reaching Young People and Schools. A member of the RBHS show choir and a lead role in many school productions, Guthrie is excited to pursue an art he loves so much.

However, the road to a successful career in performing arts is not for the weak-hearted. Like most career paths, the world of the arts comes with its hardships. For senior Ian Meyer, majoring in vocal music education at the University of Missouri – Columbia next year, adopting a humble attitude and recognizing the abilities of others is the most difficult part that comes with being a musician.

“I think there comes a time as a musician that you have to realize that you’re really not that hot. You’re really just not the best that there is,” Meyer said. “I’ve been so fortunate to be around people that I’ve either gone to their recitals or I have known them for a long time and known their natural abilities or I’ve sung with them or I’ve performed with them, and the amount of talent I see in some of these people blows me away. … There comes a time as a musician that you just have to realize, ‘I am not the best, I will never be the best.’ And that’s kind of a hard thing, but I think that teaches you to be humble and to continually work on bettering yourself.”

Guthrie also views humility as a vital part of his career as a performer. Though it is easy to “get caught up in your own ego,” he believes without the ability to recognize your own weaknesses, the art is no longer driven by passion, but by selfishness.

“I think the biggest challenge has been just staying humble and genuine and staying true to who you are, because it’s really easy to forget yourself, especially in the arts,” Guthrie said. “But the second you start thinking, ‘Oh, I’m good,’ you’ve lost it because you’ve lost your drive, your appetite to work. And it’s not really about the work anymore, it’s about you creating this cool, fancy thing for yourself. So it’s challenging to keep, to stay focused and continue to do the work and not let the distractions come in and get you.”

Because the journey is not always easy, and self-centeredness and ignorance often tempt the traveler, the support of family, friends and faculty is vital to students pursuing an art. For both Guthrie and Meyer, it is the support of their parents that has influenced them the most and solidified their career choices. In a world where the entertainment industry holds little money for most, the love from friends, family and teachers that surrounds Meyer is a foundation for him to build his hopes off of.

“Let’s be completely honest, I’m going to be poor the rest of my life and I’m okay with that,” Meyer said. “But to be in a household that just supports what you want to do as opposed to what might be the best economic decision is a really nice thing. And being involved with such great instructors like [choir director] Mr. [Mike] Pierson and like my education at [Christian Chapel Academy] and like the things through [Performing Arts in Children’s Education] that I did has been great to have that encouragement. And to have my friends there beside me just to encourage me is always good to have.”

When originally majoring in music performance at the University of Nevada – Las Vegas, assistant band director Robert Thalhuber experienced a lack of encouragement from the important people in his life. As an educator, he now watches musically talented students every year deny their love for their instrument as they go off to college for the same reason. He believes a lack of support can make or break a student’s decision to follow their passion.

“I had people tell me I couldn’t do it. I had parents say no. I had people say, ‘You’re not going to be able to feed yourself,’ and obviously that’s not true, I’m doing fine,” Thalhuber said. “There’s a lot of room for the arts. If a student wants to do something, they should go for it, as long as they have a way to get there, and they have to be realistic about it. But that’s one of the biggest things. I hear a lot of students say they’re not going to do it because, they love it, but people tell them they can’t do it. So then they don’t to it, which, totally, I just shake my head [at].”

Guthrie identifies with the lack of faith from people when they hear about his life plan. But to him, the money or lack thereof won’t matter, and the opinions of outsiders won’t hold him back. With devotion in his heart and a drive to learn and excel, Guthrie doesn’t feel the need to worry, and he believes this relates to everyone, no matter what they decide to chase in life.

“A lot of people, they say, ‘You need a backup plan, you need a fallback plan,’ and I smile and nod and it’s whatever, but the truth is, a lot of people want to be a part of the entertainment industry; a lot of people want to make art, but if you want to be really, really great at something — and I think this is anything, if you want to be a scientist or a cook — you have to give yourself to that and you have to give absolutely every bit of yourself to that,” Guthrie said. “And yeah there’s peaks and valleys and you’re going to get stuck in the rut a lot, and you’ve got to keep walking because it’s not an easy path, and for people that get down in the muck and can’t stand up when they’re down or when they get knocked down, it’s not the path for them. If you love it enough it won’t be an issue, because even if you don’t have a dollar to eat, if you’re still doing what you love, you’re going to be OK, and if that passion’s still there, you’ll be OK.”