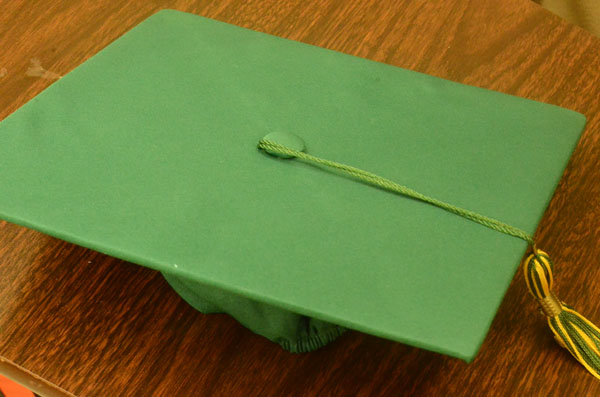 As the final chord of “Pomp and Circumstance” is released, and the RBHS Senior Class of 2013 takes their place as the center of attention on May 24, the celebration is about to begin. Commencement, as well as other activities such as baccalaureate, created as a recognition of the outstanding accomplishments of the graduating class, take place annually to remind the students, as well as the community of what the seniors have achieved.

“Both of these events are an opportunity to celebrate and thank the seniors and the amazing stuff that they have done,” RBHS Director of Student Activities David Bones said. “Obviously it’s a huge milestone for our seniors to graduate. It’s a big deal.”

Though there is not enough time to highlight every senior’s accomplishments, a handful of seniors, chosen by a special committee formed by senior Student Council leaders, represent RBHS during graduation. Bones said, after auditioning in front of the special committee comprised of a diverse range of student body members, the group selected featured speakers and performers to embody the triumphs and success of the senior class.

“It is such a blessing and an honor,” senior Mahogany Thomas said. “My audition wasn’t at my standards. That’s how I know that it’s favor and that it’s a blessing from my peers and from God.”

Joined by Andrew Hutchinson as the featured speaker for commencement, Thomas understands not only the honor bestowed upon her to address her fellow students, but also recognizes the opportunity she has to impact her peers.

Deriving her passion for public speaking from theater and creative writing, Thomas is excited to convey the lasting effect her high school career had on her life. Using what she calls the ‘Rock Bridge Legacy,’ she hopes to verbalize the people and events that define the senior class.

“From graduating from Rock Bridge, we are very distinct and we are a group of distinct individuals. And I think that that distinctness should be carried on our shoulders wherever we go,” Thomas said. “That way when people come into contact with us they’ll ask ‘Where in the world did that come from?’ And our answer will be Rock Bridge because that’s part of the legacy we hold.”

Thomas is not the only person RBHS affected and is also not the only person who hopes to articulate that conviction. Rasheeq Nizam, who will speak alongside Lauren Puckett at baccalaureate, a reflective mid-week ceremony allowing seniors the opportunity to collectively remember their high school career, also appreciates the advantages attending RBHS has presented him and strives to remind the graduating class of that feeling as well.

”I feel like this school has been an integral part of my life, and I wanted to try to portray that sentiment to the school, and especially to all my fellow students who’ve been along for this journey with me,” Nizam said. “I want to remind us of those memories so that we all remember what this school has meant to us.”

Regardless of what activities are featured at commencement, it is still graduation, a subtle reminder of the end of high school. These final exercises represent the last times the class of 2013 congregates together, but they also create the last opportunity for students to witness their peers excelling in their individual talents. For musicians, this is one such circumstance.

Performing their rendition of “Amazing Grace,” saxophonist Kaleb Jacks and pianist Dalton Maggard will once again take to the stage together. After spending the past three years playing in similar groups and ensembles, the pair is thrilled to express their talents at commencement.

And while this is the final time that Jacks and Maggard will perform together as students at RBHS, the two musicians are unique in that they will be continuing their musical careers alongside each other in the fall at Berklee College of Music in Massachusetts. Getting to exhibit their shared passion for music during this experience is a moment both are excited for.

“It’s cool that we are going to the same place for college and we’re both pursuing similar careers and we will be finishing the first part of our lives at the same time,” Jacks explained. “We get to play together but also get the same recognition for what we’ve done at high school.”

Besides Jacks and Maggard, a piano solo by Daphne Yu will round out the performances for commencement. Earlier in the week at baccalaureate, an a cappella quartet comprised of Ian Meyer, Adam Schoelz, Asa Lory and Jesse LaFond will perform, and the RBHS Chamber Choir will sing “I Hope You Dance,” made famous by singer Lee Ann Womack.

While only eight performers are acknowledged during commencement and baccalaureate this year, it is not the individual successes that should be noted. Rather, what should be remembered is what they represent; a depiction of the thirteen years of hard work and dedication that ultimately paid off as the graduates make their accomplishments known as they receive their diplomas.

For those few who are able to exemplify these achievements, the knowledge that typical students can obtain great things empowers them all the more. If they can be chosen from a pool of hundreds of their peers now, who’s to say they can’t do it again someday, out in the real world. Whether in life or school, the students have done something special.

“Being able to speak at commencement, I am able to discover that even an everyday student can accomplish anything. While it is super important to be involved and to be active you don’t have to necessarily be the number one leader to obtain your goals,” Thomas said. “As a society we are so focused on who is president of this and who is vice president of that. We forget about those everyday people. This year being one of those ordinary people that doesn’t have an obligation just lets me know that I can do anything.”

Golden path to stress paved with procrastination, ‘Netflix’, ‘We TV’

Yasmeen is a a bubbly girl who enjoys writing and learning about people. She enjoys expressing her opinion and is strong willed. She consumes her free time with drawing and hanging out with family and friends. You can contact her at ytaranissi@gmail.com.