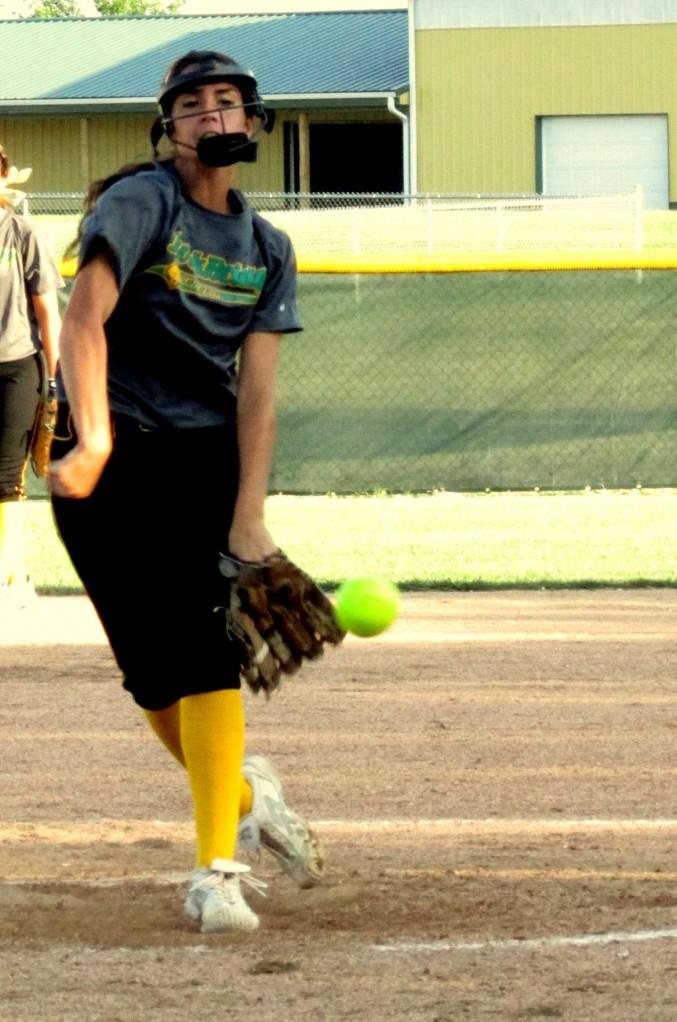 Senior pitcher Breanna Logan warms up in the top of the fourth inning, helping her her team from the circle claim tonight's victory over the Fatima Comets at Rock Bridge.

Tonight, the Bruins varsity softball team won an intense, nail-biting offensive game against the Fatima Comets. With no score the first two innings, Fatima hit the score board hard with four runs in the top of the third.

Beginning with a walk from senior pitcher Connor Logsdon, the Comets capitalized on appropriately placed hits and an error by the Bruin’s defense. Keeping their heads up, the Bruins cut the lead in half with a base hit scoring run and a pass ball steal home, making the score 4-2 with Fatima leading into the top of the fourth.

The fourth inning finished with Fatima scoring again for a total of  five points. This did not change throughout the remaining three innings.

The fifth inning ended with another run from the Bruins. A double from senior outfielder Madison Wipfler and a base hit from senior second baseman Callie Sapp began the rally that lead to their victory.

In the bottom of the seventh, Sapp hit a two-run home run, making the game an even score of 5-5. While the crowd anticipated a night of extra innings, senior pitcher Breanna Logan stepped into the batter’s box. Before her at bat, seniors Shelby Atwell and Taylor McDannold had two base hits.

“They continued to work hard every single inning,” softball coach Janel Twehous said. “They never gave up that game. They honestly gave us their hearts. It was a great, honest team victory. I think we are headed in a great direction – anything is possible.”

The Bruins add another win to their season making their record 8-3.

Maribeth never really knows what to expect. She finds herself fighting between being overly nice or extremely realistic, coming to an uncompromising medium in between the two. Working towards mastering her yogic practice while trying to balance on her own two feet while the future comes crashing in full force, Maribeth enjoys Anthony Bourdain’s sense of humor and disgusting taste in food, sleeping, singing and dancing at random intervals as if her life were a musical. It’s safe to say Maribeth is completely unique hard headed and a photography nerd who has a goal to laugh until she cries and watch as many movies as she can in this lifetime. Maribeth is the Photo Editor for The Rock and BearingNews. Contact her at meiken@bearingnews.org