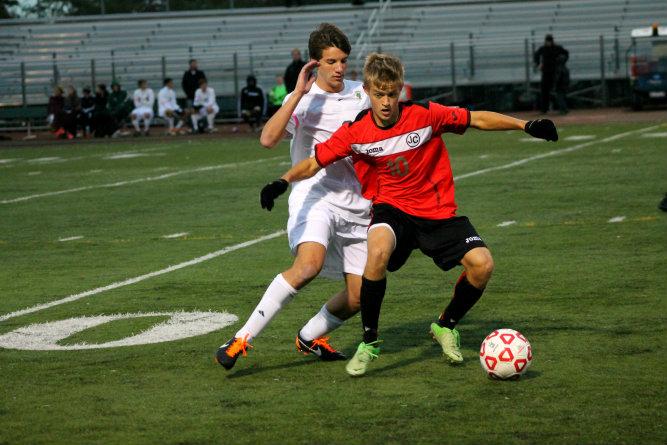 Connor Blitz, grade 11, defends the opposing team member from turning the ball around and heading for the goal. Photo by Randi Obermiller.

After a night crowded with a soccer game and the homecoming dance, the varsity soccer team took the field this morning, Oct. 26 against Blue Springs South High School.

The game was riddled with penalty calls on the Bruin offense, and rightly so. The defensive structure was set up for an offside trap. Even so, senior Jacob Kovarik and sophomore Tarnue Tyler managed to score goals in one-on-one confrontations with the goalie after they played through balls, or passes made past the defenders as to allow the forwards to run onto the ball. The goalie went for the low sweep, but both bounced it over in well-placed position as to score the goal, despite Blue Springs defenders rushing toward the goal to see if they could kick it out before it crossed the goal line.

RBHS missed another huge goal scoring opportunity in the first half, however, when the referee gave a penalty kick to RBHS after Tyler was clipped in the back inside the goal box. Sophomore Brett Bales took the kick and shot it too far to the right, ending the first half at 2-0.

In between the two halves, the crowd could see Head Coach Alex Nichols talking to his team in a huddle along with senior Salim Gumati doing push ups to stay warm. Then the team took the field after switching sides and commenced the second half. Though the RBHS team took many shots, such as one shot by Salim Gumati after bypassing the defenders himself and taking the goalie head on and not finishing or a few strong fronts brought by Blue Springs of which the defense or goalies Greg Kelly and Wilson Fitzgerald stopped, only one resulted in another goal scored by Kovarik after the ball rolled across 6 yards from the goalpost.

Senior Defender Reggie Tyler said the offside calls on the RBHS offense annoyed him throughout the game, but he was glad they scored three goals.

“It was a little bit frustrating, but it’s nothing that’s going to be too hard to fix,” Tyler said. “We just have to make a little adjustment, so we should be good by next game.”

Assistant Varsity Coach Brandon Butcher explained that since Blue Springs was pulling their defense up more, the forwards weren’t used to that kind of game play and it made a trap for offense to get offside more easily.

“Our forwards haven’t played against that defensive formation very much this season, so it was a learning experience for them to adapt to that strategy,” Butcher said. “What we told them during half time was to possess more on the outside and play more diagonal  balls.”

Despite the unfamiliarity, the forwards created a lot of scoring opportunities, according to Butcher, and got more creative and had variety in the way they were making these plays happen.

“The first half we kind of struggled with the wind carrying the ball a little too far,” Butcher said, “but we generated a lot of opportunities. What we need to work on, though, is putting those away and scoring those points.”

After the game last night of not having a shut out and being scored on once by their opponents Francis Howell Central, Tyler said the defense did better today than last night.

“We played pretty well last night; we just had a couple of mistakes,” Tyler said. “We cleaned it up a little bit today, and we have been playing better than we have been in the past.”

Butcher said he noticed the improvement and didn’t see the “lapses” that happen throughout this season today.

“I felt like our defense covered a lot better for each other,” Butcher said. “Just seeing our defense cover those holes was good. The last few games we had a couple of defensive mental lapses that ended up allowing goals and I didn’t see much or any of that today. To have this shutout was really exciting.”