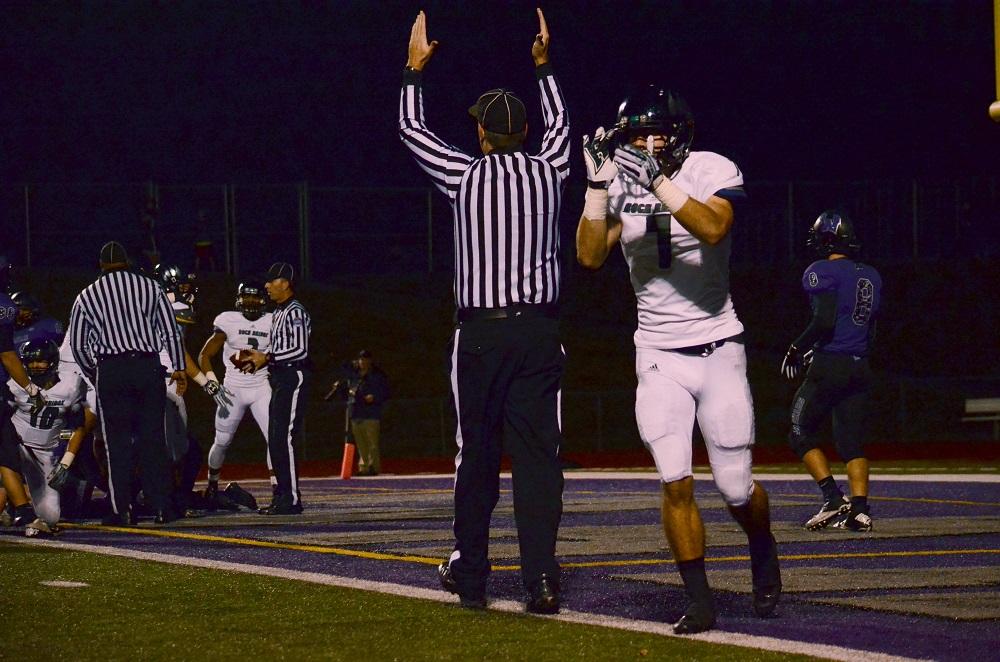 After electing to kick after winning the coin toss for the much anticipated rematch of Rock Bridge Bruins and Fort Zumwalt West Jaguars, the Bruins dominated with a win of 28-19, securing their position in the Missouri state semifinals. Previously this year, these two teams faced each other with a similar outcome, a Bruin win of 48-14.

“You go back and you watch our first game and it got a little lopsided,” head coach A.J. Ofodile said. “But the more you watch it the more you realize we were the beneficiaries of some pretty good fortune that first game, so there probably wasn’t that big a span as that score would indicate.”

The first quarter was marked decisively by an aggressive and effective Jaguar offense. Their first touchdown was set up when senior quarterback Zach Reinken connected to junior wide receiver Logan Andersen for 42 yards, placing the ball on the 9-yard line. Two plays later the Jaguars punched in the 7-yard run making the score after a good extra point 7-0.

The next score did not come until the second quarter, during just the third possession of the game, after the Bruins punted away to end the first quarter. The second quarter provided two touchdowns and many big plays. It began with a big play, an interception, from senior wide receiver Zach Reuter on the Bruin 1-yard line.

“I know I can always make plays, but we always just come out and do our best,” Reuter said of his performance in the game. “We just gotta get this win. We got two games in the way, we’re just trying to get to the dome.”

The ensuing Bruin drive spanned 75 yards of the field, ending in a 3-yard touchdown run from sophomore Hayden Johnson and a successful PAT by Matt Troyer, who stepped into junior kicker Joe Barbee’s place for the entirety of the game.

The next Jaguars touchdown run would be their second touchdown of the game as they had a three play possession involving two deep pass connections between Reinken and senior wide receiver Seth Hebert, the first of which was for 45 yards and the second of which was for 43 yards to the end zone. After a PAT attempt that flew wide left, the Bruins returned the kickoff and went on a six play drive to score a touchdown. Logan Twehous’ pass to senior Elisha Peat gave the Bruins their first lead of the night.

RBHS started the third quarter with a 79-yard touchdown run from senior Eli Stout, extending their lead to 20-13 following a missed PAT.

The kickoff resulted in a touchback, and the first play by the Jaguars offense was intercepted by senior Antwon Turnage who then ran the ball to the Jaguar 32-yard line. The long drive resulted in the Twehous’ second touchdown of the evening, a 12-yard toss to Reuter in the left corner of the endzone. After the touchdown, RBHS attempted to make a 2-point conversion, and Johnson converted, making the score 28-13 in favor of the Bruins.

FZW would make sure that the third quarter was not dominated by RBHS solely, as they went on their final touchdown run of the game in the closing moments of the quarter, and scored a touchdown  as senior Rourke Penn blocked the attempted punt by Johnson and ran it back for a touchdown.

Trading possessions in the fourth quarter, the game ended with the Bruins taking a knee and subsequently taking their first district championship since 2005. By beating FZW 28-19, the Bruins advance to the state semifinals for the first time since 2002, playing Hazelwood Central (12-0) in Columbia this Friday.

“We knew at some point we’d get on track is was just a matter of settling in and our defense held them at bay,” Ofodile said. “It wasn’t pretty, we came out and fought and scratched and clawed and all of that proverbial stuff and we got the win.”