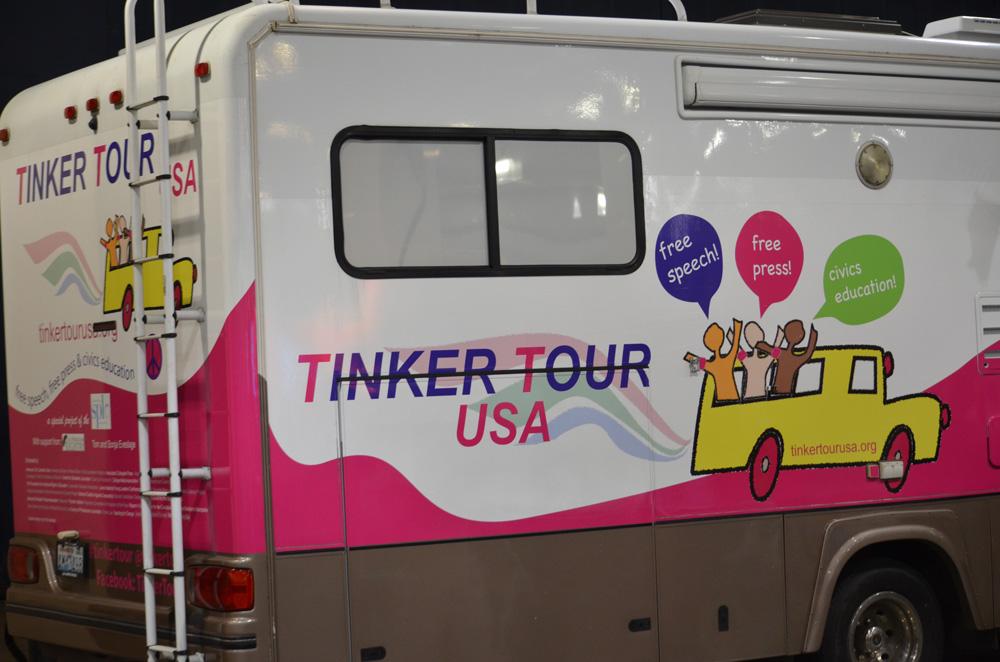 In the late ’60s, three students from Des Moines, Iowa made legal history simply by wearing a black armband to school in protest of the Vietnam War. Among them was 13-year-old Mary-Beth Tinker. In the groundbreaking ruling, the Supreme Court famously ruled that students do not “shed their constitutional rights to freedom of speech or expression at the schoolhouse gate,” paving the path to the protection of student rights all over the country.

Nearly five decades later, Tinker is touring the country in a recreational vehicle along with Student Press Law Center attorney Mike Hiestand, visiting many schools, universities and conventions instilling and promoting youthful awareness of their fundamental rights as American citizens, and as students by helping young adults find their voice.

Coming from a short visit on university campuses in Connecticut, the inspiring Tinker Tour crashes the JEA/NSPA Fall National High School Journalism Convention, held this season in Boston Massachusetts, informing young journalists of the endless possibilities granted to them as student writers by the First Amendment of the Constitution.

Inspired by the difference that standing up for yourself can make, Tinker established the Tinker Tour in order to reach out to students and non-students all over the country with the firm belief that information and empowerment is not only achievable, but essential in helping students find their voice. Believing full well in the capability and the availability of resources to today’s youth, Tinker set out to inspire and listen to the stories of others while sharing her own.

“I am proud and surprised [to be a part of history], and that something that was so small, this really, really small action made such a difference,” Tinker said, “but it shows that it’s the small actions that really do make a difference.”

Also helping promote the Tinker Tour is Student Press Law Center Executive Director Frank LoMonte, who has published various articles about a selection of media-law cases and the First Amendment in publications including Education Week, the American University Law Review, and many others. Working in SPLC, LoMonte has advised countless students who have faced friction with their school administrations due to publication controversy, and the lack of acknowledgement by said administrations of their students’ rights in this country.

LoMonte notes it is usually an administration that’s really sensitive to the public relations image of the school that is unlawfully controlling student publication.

“People at schools are much more protective of their image than they used to be because they realize that a news story doesn’t go away in a day or two anymore,” LoMonte said. “The news story might last for months in their google results, so they’re much more likely to be protective and stop that bad story from being published in the first place.”

One of the main issues the Tinker Tour has tackled is just so. Tinker, Hiestand, LoMonte, and many others strive to prevent and protect students from being repressed in a school environment. The Tinker ruling, though rolled over by many cases ruled on years later, set a precedent that cannot be stepped on and ignored, and the Tinker Tour only set out to reaffirm that all over the nation.

Second to last stop on the tour is the University of Missouri’s School of Journalism in Columbia. Here students will get a firsthand understanding and informative Q&A on their rights as University students; this session will be open to the public and advertised at RBHS.

Planning to attend this class is junior Brett Stover, a student advocate at RBHS.

“I think it’s important that students across America know about the freedoms we have been given from the Tinker case because those freedoms are the fundamental principles on what our US constitution was founded on,” Stover said. “The First Amendment in my opinion is the most important amendment in the US constitution, and I think it is important for all students to be educated about it.”

The Tinker Tour has gone great lengths to make a positive and powerful impact on the youth and the public of the United States. Both Tinker and Hiestand set aside their personal careers to promote the fundamentals of the tour. Awareness, as stated by the tour leaders, is the key to students finding their voices and learning to make a difference using the resources around them.

“[The most inspiring thing about the Tinker Tour] is honestly the reaction of the kids,” LoMonte said. “If you were a skeptical person, you would think that a lady in her 60s, driving around in an RV, telling a story that’s 40 years old would be the biggest snooze in the world to kids, but it’s not. It’s the exact opposite. Just looking at the people lined up to talk to her, they’re coming away so energized and so empowered. It’s the first time they heard from somebody who was knowledgeable about the law, telling them that they have rights, and that people care.”

The focus on youthful awareness has done much to promote youthful empowerment, from Boston to Columbia. The Tour has brought a fresh perspective to the law and the rights of students to individuals who were little to not aware of their protection under the United States Constitution. Students, teenagers, and adults across the country have benefited from the efforts of Tinker and her team, learning not only the legal ethics that accompany the responsibility of their rights, but also that something simple and meaningful can bring about surprising and impactful change.

“The culture at Rock Bridge is one that is firmly centered around the first amendment in my opinion under the freedom with responsibility policy,” Anthony said, “and students can really learn from that. From the first day, our school emphasizes this policy above everything else, and that’s what really the constitution in America in general is all about. You are given the freedom of speech and freedom of religion above all, but you have the responsibility to use those freedoms to better yourself and your nation.”

Much like the principles held fast with the Tinker Tour, RBHS itself was founded during the same momentous cultural change in America. For some, the culture and ideals surrounding freedom of expression affirmed at that time seem to have strongly endured within RBHS.

The numerous clubs, open debates, organizations and promoted freedom of expression may all be cited as evidence of the founding era of RBHS and its endurance.
“Our school has some unique clubs, including a young socialist club…which meets to discuss many ideas that contradict our government,” senior Kelsey Harper said, “Our journalism program is also a good example of our freedom [of expression].”

However, not all schools are open and willing to allow for freedoms within student expression, not only in years past, but also in recent history.

“There are a lot of…cases out there in which students are not even allowed to wear certain shirts that hold a political message on them,” Mark Hiestand a lawyer for Students Press Law Center said.

However, students are not alone in their pursuit of freedom of speech and expression. Organizations such as Students Press Law Center, for which Hiestand works, are completely dedicated to hearing and acting on the behalf of cases in which they believe a student’s rights of speech have been violated. However, the waters have been muddied in many cases with the development of technology, and with which the boundaries of the administrator’s jurisdiction have become unclear.

“It used to be very clear where the boundaries were, when you left the school, the administration gave up power to your parents.” Hiestand said, “However, where the line is drawn now has become much more unclear.”

With the reemergence of Mary Beth Tinker, her goal appears to be to reestablish and affirm the right of expression for young people.

“I’m traveling with Mike Hiestand… And that’s a group that’s been standing up for the rights of students for many many years. They have encouraged students and helped those who have faced censorship and other problems with their student media.” Mary Beth Tinker said, “I am very happy to be traveling with them right now.”

Students, while deeply invested in their modern sources of media, may not always be able to appreciate their freedoms at schools such as RBHS unless those freedoms have been revoked at some level. Columbia Public Schools itself has let fly the usage of many social media sites within school, not to mention entrusting the students to utilize personal property, like cellphones, effectively while the building. With efforts from people such as Tinker and organizations such as the SPLC it should be noted, that the liberal view of RBHS is not one shared unilaterally across all high schools.

“Overall, the need of students seems to be met more than ever,” Tinker said. “It is young people who are most often [repressed].”

What do you think?

Which celebrity is most correct in vocalizing political opinions?

Thank you for your vote!
Sorry, you can only vote once
Please select an option!
Show resultsHide results

“I feel like the school does a good job of giving you your freedoms as a citizen until you get them taken away (with the exception of closed campus lunch, which I feel is the only right rock bridge doesn’t give freshman and sophomores that they should). I feel that since they do such a good job of this; this is why Rock Bridge excels in academics and athletics,” freshman Jack Allen said.

“I feel like the school does a very good job of treating us like citizens. At West and Smithton kids were treated more as animals and livestock just being pushed through the system but then at Rock Bridge you have the ability to choose your own path. You’re allowed to freely express yourself how ever you want and if you have the drive to succeed then everything is right there in front of you for the taking,” junior Graham Ratterman said.

“I think they do a really good job of [allowing us freedom at RBHS]. More so in the past than this year just because of the new teachers and students and after they re-zoned it became a lot less diversified. And I mean I obviously am not a huge fan of high school, but as far as letting people express themselves and be who they are I think Rock Bridge does a good job of allowing that. There’s tons of different clubs and groups of people who are always advertising their beliefs and talking about them openly without reprimand. It’s cool to me,” senior Mariah Brady said.

Do you attend a party?