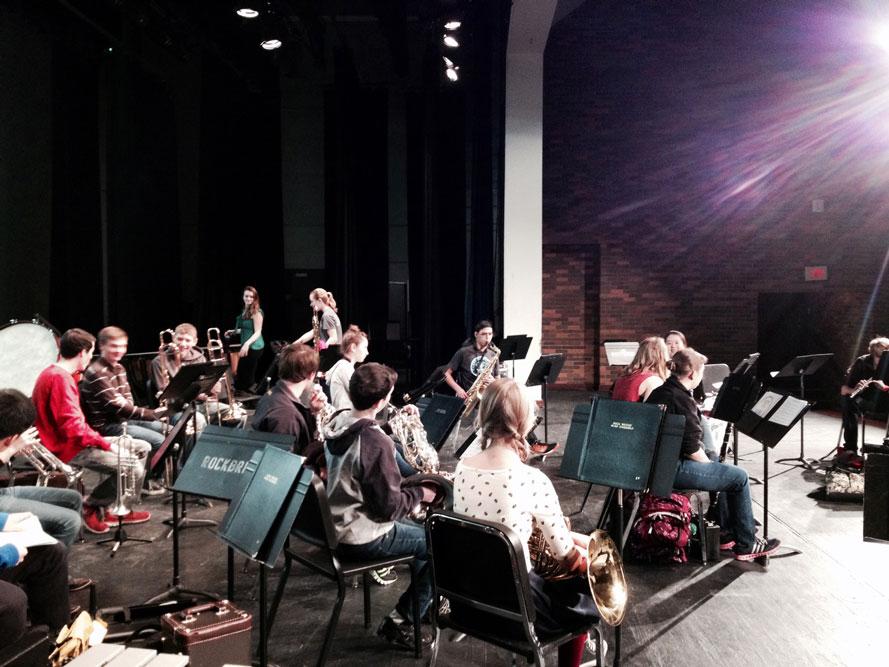 After auditions were cancelled and rescheduled due to inclement weather Saturday, Dec. 7, yet another possible change affects students auditioning for the Missouri state band.

On Saturday, Dec. 21,  high schoolers from across the state are supposed to perform a blind audition for judges at Hickman High School; however, a second bout of wintery weather Saturday may prohibit students from travelling.

Missouri Bandmasters Association board of directors will decide by Friday at noon and, in the case of inclement weather, students who are auditioning must record their auditions to a CD in one track with no talking in between pieces, according to missouribandmasters.org. According to the website, mailing instructions will be posted in the case of inclement weather, and recordings can be sent in between Dec. 21-24. Audition material, procedures and requirements are available at missouribandmasters.org.

Smithton Middle School band director Brooksie Collins has judged All-State flute auditions for nine years. In her experience, live auditions clearly distinguished those who should make the ensemble. She said the recordings will still provide a fair audition.

“The students who have the best audition will make the band regardless of the audition procedures,” Collins said. “I believe the biggest effect will be because students who might not have been prepared in early December due to other obligations will have had time to prepare by late December.”

Collins said another change will come if students must send in audition recordings. Normally state auditions consist of a preliminary audition and then an audition for those who make call-backs, through which chairs are assigned, Stephanie Stanley, a RBHS junior trombonist who earned a spot to audition for all-state band, said. With recordings this process will not happen.

“There will not be callbacks, so students really only get one chance instead of a possible two…,” she said. “I feel as though students need to understand both methods are valid and a great performer will always be a great performer.”

Collins, who, while in high school, earned a spot in the Missouri all-state band for four years, speculates that students may worry over the potential change in the auditioning process.

“Some pitfalls for students will be the results won’t feel as immediate, so there will be longer to worry. The process in it’s entirety will feel a little less personal,” Collins said. “A live performance always gives the performer an opportunity to feel the emotions of their audience. The performer can sometimes feel more ‘in the moment’ when they are playing a live audition. Also, sometimes it is hard to say what that certain ‘sparkle’ or personality is in a performance, kind of like charisma, and sometimes that little something might not translate as well into a recording.”

For senior trumpet player Daniel Shapiro, who is one of the 22 musicians at RBHS to have the chance to audition for All-State band,  this is a problem.

“Well, first of all I was really mad when they moved [the auditions] to the 21st in the first place, just because I’d practiced to be ready on the seventh when it originally was,” Shapiro said. “I was like O.K. well now I’m going to have to un-practice and re-practice again so I can be at the same level of readiness and then when they talked about the taping … one of  my strengths mainly is I do well on auditions.”

He said the recordings won’t show the player’s competency; rather, they will only give a look at the amount of time the musician has on his or her hands. In the typical all-state audition, Shapiro, who has auditioned three years and has made the band two years, says, musicians typically only have one chance to play, but while recording, people can repeat the pieces until they get a perfect audition.

Students planning to audition found out about the possibility of recorded auditions Tuesday, only five days before the planned date. It is the musicians’ responsibility to find time and a recording device to record their etudes, scales and musical exercises.

For both Shapiro and junior trombonist Stephanie Stanley, finals weeks cuts down the time they have to record their auditions.

“There could be some really good players who only have an iPod to record off of, which I think is a major disadvantage,” Shapiro said. “At least in like state auditions of the past … they do it so everybody’s kind of on the same page and you all play in the same room at once so it’s a nice equalizer.”

Collins said she understands why students may be worried because whether an audition is live or recorded, she said judges pay attention to the same things: tone, technique, articulations, pitch, scales and musicality. She concedes it can be harder to hear tone and articulation nuances in recorded pieces.

While Collins is unsure how the recordings will be judged, she sees a number of potential benefits for those auditioning. With tapes, she said judges can go back and compare individuals against each other, rewind or stop the recording to write more specific comments about the audition and even discuss the pros and cons of a performance.

“Students learn how to work the technical side of music performance. All college performers and anyone who competes in competitions needs to be able to get a great recording. I feel all performers should be in the habit of recording and critiquing their own practice,” Collins said. “If the auditionees were practicing this way the entire time, recorded auditions would not be a fearful experience. I also think some students go into the auditions and feel like they did an outstanding job and made no mistakes, when in actuality the audition had many small mistakes they did not notice during the moment. If the audition is recorded, it should be very easy for the student to ask their director in what ways they can improve.”

In addition to gaining experience for future endeavors, students may also be able to calm their nerves. With a recording, Collins said, students may have an easier time feeling comfortable with their environment and may also feel a reduction of the “test anxiety” of the audition.

Either way, Shapiro said he will play the audition material Saturday after finals are over.

“I know I need to really try because there’re some really good trumpet players in this state, and there are also some really good trumpet players who will definitely take the time to create a really good recording, and I know I need to do the same,” Shapiro said. “Also in terms of preparation stuff I unfortunately have to stay prepared throughout Christmas break and into January … I just have to keep holding out the same material as in the past so I guess a lot more preparation.”