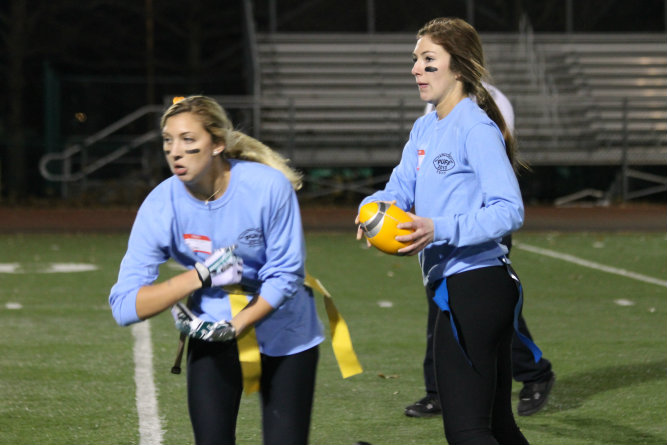 The seniors fake a pass as the quarterback looks up for an open receiver.
[heading]Powderpuff 2013: Juniors vs. Seniors game called[/heading]

The seventh annual Rock Bridge High School Powderpuff football game began with a coin toss around 4:30 p.m. succeeding which, the freshmen took possession in their game with the juniors. While they may have win the coin toss, they went on to lose to their upperclassmen with a final score of 14-1 after two 10 minute halves, and two “bonus-point-opportunities,” which in their game happened to be having the two teams see which could form the words “FOOD” or “BANK” the quickest, and which one could dance better to the Cha-Cha Slide. These two teams competed at approximately 3/4 of the way through each half of the respective game.

The first score of the freshman-junior game was a touchdown run by junior Maddy Cole after winning the first bonus point opportunity of the game, and a good kick by junior Sydney Griggs made the score 8-0. Next was a pass from junior Sydney Griggs to junior Sydney Mulholland which, after a PAT that was no good, left the score at 14-0. The only time the freshmen would find a point upon the board for their side, is when they successfully danced to Cha-Cha Slide better than the juniors who attempted to dance in a conga line, while the freshmen performed a very orderly line dance.

Similar to their junior counterparts, the seniors won their game 15-7 over the sophomores. After a strong sophomore offensive which they believed was a touchdown, there was a flag thrown and the ball was ruled down on the 25 yard line. After losing their opportunity to take an early and much needed lead against the undefeated senior class, the momentum may have been instrumental in their victory, but they were stopped quickly by an interception by senior Hayden Niemeyer. After which, Alexus Caraon ran for four yards, and Maddy Wipfler ran for 26 before the first challenge of the game, which the seniors would win, where they all laid down on the ground and spelled out their graduating year with their bodies.

When they came back to the game, the first thing play to go down was an 18-yard touchdown run up the middle by Alexus Carson, and then a successful PAT kick, making the score 8-0. The game nonchalantly continued until the second bonus point opportunity, in which the challenge was to see which team could dance to the Cupid Shuffle better, to which the seniors responded with a compact, but orderly Cupid Shuffle, and the sophomores responded wih what appeared to be a showing of gymnastic prowess, which in the end, did not win the favor of principal Jen Mast, who was judging the contests.

“We put in a lot of hard work for this and we fought and we came out and practiced for this even when it was cold and I couldn’t feel my hands? We. Got. The win.” This is what senior Alexus Carson would go on to say in a post game interview about her team.

After winning the cintest, forcing the score to 9-0, the seniors gained yet another touchdown, a 10 yard run, and after a PAT proving no good, and the score at 15-0, the sophomores would attempt to start momentum by a first play passing touchdown to Bria Trent, making the score 15-7 after a good PAT just before the game came to a close.

When asked if he could have predicted this outcome to the sophomore-senior game, sophomore coach Garrett Barnette-Cruger said, “Not really, I kind of expected our team to run over them, they’re just big, they ain’t have anything for us.” And when confronted with the information that the seniors were undefeated, Barnette-Cruger had this to say, “It’s rigged.”

When the seniors took on the juniors for the championship, nobody predicted it would turn out the way it did. When senior Madison Wipfler, ran for a touchdown in the first senior drive, with a good PAT, and then won the race, a 40 meter dash which was the bonus point opportunity, and made the score 8-0, then had a touchdown pass before the juniors even knew what hit them, and before the turn of the half, those who weren’t shocked by the vicious cold, we’re stunned by the decision of the junior coaches when they decided to forfeit, or at least that’s the story of Alexus Carson.

When asked about the abrupt end to the game, Carson said, “I don’t know; the juniors were too scared to play and we were out for blood and clearly they couldn’t handle it so their coach called the game.”